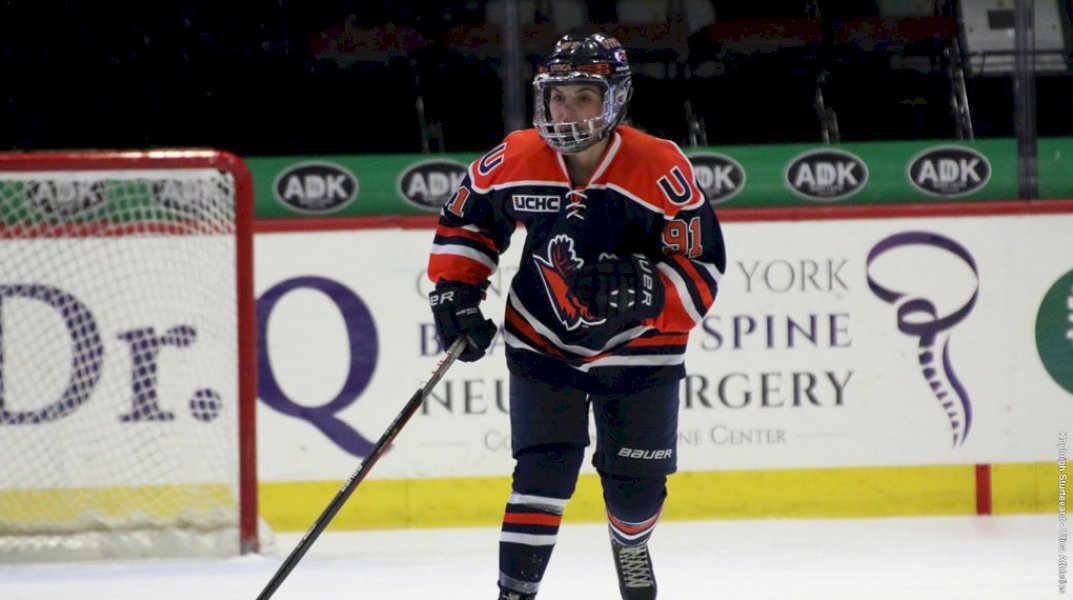 UTICA, NY – The Utica University women’s ice hockey team opens its 2022-23 regular season home schedule this weekend with a pair of conference games. The Pioneers will host Arcadia University on Friday, November 4th at 7 p.m., before wrapping up the series on Saturday at 2:30 p.m. Both games will be played at the Adirondack Bank Center at the Utica Memorial Auditorium.

Follow Along: Live video and stats for both games will be available at portal.stretchinternet.com/utica/.

Last Time Out: The Pioneers have started with a record of 0-1, but faced incredibly stiff competition against #4 Elmira College on Friday. The Pioneers pushed their hosts to the limit but dropped a close 3-2 game at the Murray Athletic Center in Horseheads. Utica led 2-1 at the end of the first period, and had chances to break a tie later on before Elmira netted the winner with just north of two minutes left. Erica Sloan (Potsdam, NY/St. Lawrence Steel) and Hailey Modlin (Phoenix, AZ/Boston Shamrocks) had the Utica goals in the loss.

Goaltender of the Week: After solid performances in a preseason game and the regular season opener against nationally-ranked competition, it’s clear that junior netminder Angela Hawthorne (Santa Clara, CA/Meijer) hasn’t lost a step from last season. Hawthorne was named the United Collegiate Hockey Conference goaltender of the week on Monday after notching 38 saves on 41 shots in Friday’s loss. Hawthorne also had 32 saves in a 1-0 loss to nationally-ranked Norwich in a preseason exhibition. The reigning UCHC Goaltender of the Year finished her sophomore season with a 14-3 overall record and six shutouts to also land on the UCHC All-Conference First Team. Her six shutouts not only placed her fifth nationally, but were enough to rank second in a single-season in program history. Hawthorne’s .942 save percentage tied the program record, and her 1.22 goals against average is now first in Utica’s program history for a single-season.

Keep The Puck: Newcomer Kaci Ryder (Shrewsbury, MA/WC Swans) picked up her first intercollegiate point in Friday’s game. The freshman had an assist in her first regulation period of college hockey, as she assisted on Hailey Modlin’s (Phoenix, AZ/Boston Shamrocks) goal at 7:34 of the first period to tie the game at one.

Against The Knights: The Pioneers are 2-0 against Arcadia after meeting the Knights for the first time last season. Utica won both games by 8-0 scores. In the series opener, Georgiana Santullo (Woburn, MA/Boston Shamrocks/Woburn High School) had the second hat trick of her career, and did it by way of a natural hat trick. Carly Stefanini (Framingham, MA/Brooks School) also had a pair of goals, while Sirena Fitzery had three assists. Brooke Hubert (Oceanside, NY/Minnesota State University- Mankato) and Madison Novotny (Wesley Chapel, FL/Northwood School) scored their first collegiate goals in the game. In the second game of the series, Santullo impressed again with a second hat trick and five total points in another win by the same score. The Pioneers went 4-for-6 on the power play in that game.

About Arcadia: The Knights are a second year program under head coach Kelsey Koelzer. This will be their season opener after winning ten games in their inaugural season. Karahkwenhawe White, Morganne Dee, and Berklee Hibbard all return after pacing one of the nation’s newest programs offensively with fourteen points apiece. Goaltenders Hannah Bergeron, Sophia Szelag, and Jo Coates all return as well.

Up Next: The Pioneers head on the road to face King’s College on November 11th and 12th. They return home the following weekend to host Stevenson.