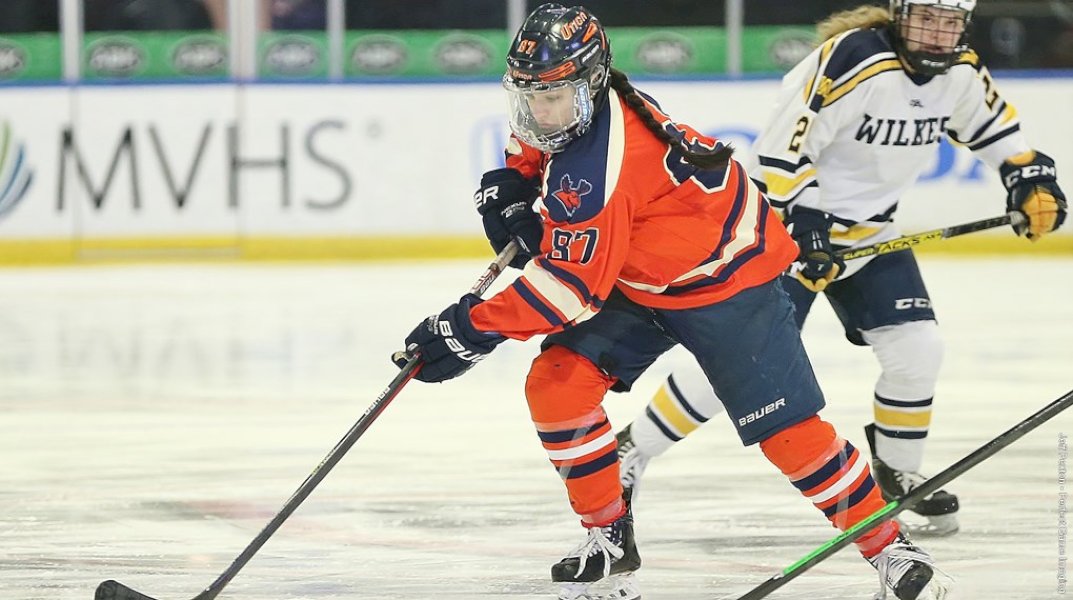 CANTON, NY – The Utica University women’s ice hockey team opened its 2022-23 preseason with a road victory. With the game tied at one goal apiece, the Pioneers’ top line scored just past the midway point of the contest to lift the Blue and Orange to a 2-1 win over host SUNY Canton at the Roos House Ice Arena.

The Pioneers out-shot their hosts by a 29-26 margin. Neither team converted on the power play in a total of six opportunities.

Lillis gave the Pioneers the lead just 3:18 into the first period. With Erica Sheaffer (New Hartford, NY/Wilkes University) in the box for a hooking infraction at 2:57, the Pioneers had to get it done shorthanded. Rookie Kelsey Elliott (Attleboro, MA/East Coast Wizards) jarred the puck loose with a timely stick lift along the right wing half wall, which moved forward to Molly Pedone (Trinity, FL/Robert Morris). Pedone decisively tossed the puck up to Lillis, who had split both of Canton’s point players at the blue line to get free in the neutral zone. She promptly buried the breakaway chance past Canton’s Sirena Alvarez for a 1-0 lead.

Canton drew back to level terms before the period was out, as Danika Lalonde delivered the goods with a goal for the home team at 13:11. The tie score carried over into the second period.

With the game just over 30 minutes old, the Pioneers netted the game-winner. Santullo crashed the net on a rebound left by Alvarez, with Erica Sloan (Potsdam, NY/St. Lawrence Steel) picking up the assist.

Neither team scored in the third period, with freshman netminder Breese Burlingame (Binghamton, NY/Northfield Mount Herman ) delivering a spotless 11 save third period in her first collegiate action to nail down the win.

Utica completes its preseason twinbill against nationally-ranked Norwich University on Sunday. Puck drop is set for 2 p.m. at the Adirondack Bank Center at the Utica Memorial Auditorium.