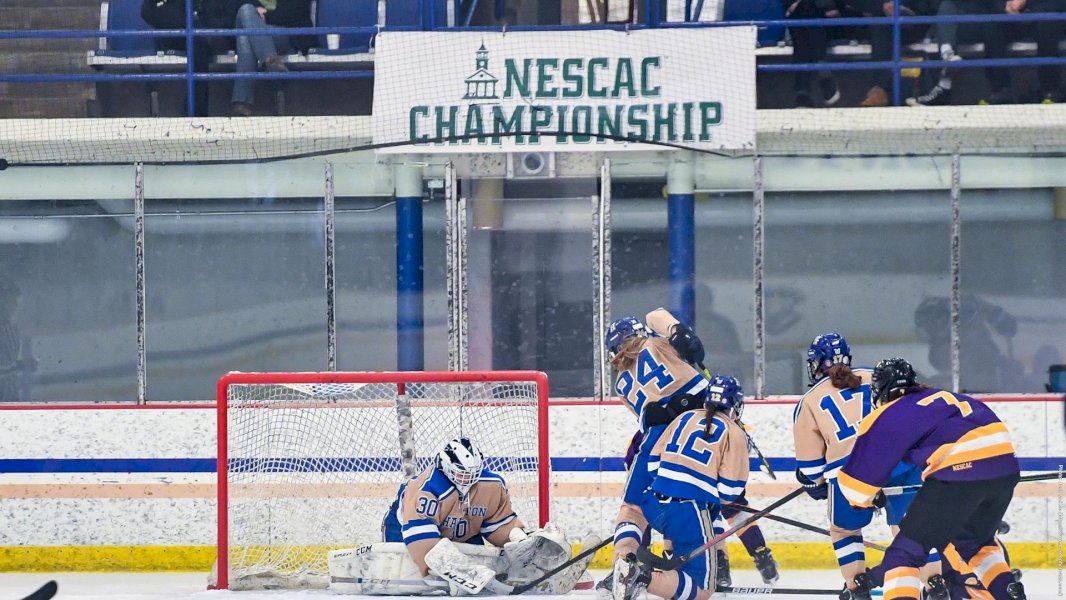 Hamilton College’s Claire McGennis ’24 scored in the first period and Sidney Molnar ’22 stopped all 21 shots she faced in the Continentals’ 1-0 win against the Williams College Ephs in a 2022 NESCAC Women’s Hockey Championship quarterfinal at Hamilton’s Russell Sage Rink on Saturday afternoon.

The fourth-seeded Continentals (12-9-0 overall) advanced to the championship semifinals for the third straight time and the sixth time in the history of the event. Hamilton also edged Williams 4-3 in the 2020 NESCAC quarterfinals at Sage Rink. The Continentals will play on Saturday, March 5 against an opponent and at a site and time to be determined.

The fifth-seeded Ephs (12-10) had swept the season series against Hamilton with a 4-1 win on Dec. 3 and a 2-1 victory in overtime the following day in Clinton, N.Y. Chloe Heiting turned away 24 shots and Kelly McCarthy blocked four more.

Molnar posted her third shutout this season and the sixth of her career. She owns a 1.89 goals against average and .931 save percentage. Hyla Mosher ’23 won 16 of 23 faceoffs, and the Continentals won 26 of 42 as a team. Abby Kuhns ’23 and Katherine Solohub ’23 blocked three shots apiece as Hamilton finished with 16.

McGennis scored her third goal this season at 6:38 of the first period. Both Maura Holden ’23 and Sami Quackenbush ’24 picked up their eighth assists. Holden got possession of the puck in the Continentals’ attacking zone near the left end boards and skated behind the Williams net. She held on to it until she got to Heiting’s left and shoveled a centering pass to McGennis at the right post where she one-timed a shot into the back of the net.

Hamilton nearly made it 2-0 a little more than two minutes into the third period. McGennis dumped the puck into the Continentals’ offensive zone off the right-side boards and it took a hard carom off the end boards to Allie Curry ’23 in the slot. Heiting had come out to play the puck when it bounced off the end boards and left an empty net, but Curry’s shot clanged off the crossbar.

Molnar made four big saves in a span of about 20 seconds midway through the third period. She stopped McCarthy twice with about 12:15 left and, after a faceoff in Hamilton’s defensive zone, she blocked a shot from the right faceoff circle by Ellia Chiang. The rebound bounced into the slot and Avery Dunn was able to get a good shot on net, but Molnar made a fantastic kick save with her right leg to keep the shutout intact.

The Ephs pulled Heiting for an extra skater with 1:37 remaining. The only shot Williams put on Molnar the rest of the way was by Brynn Puppe from above the left faceoff circle after a faceoff win in the Ephs’ offensive zone.