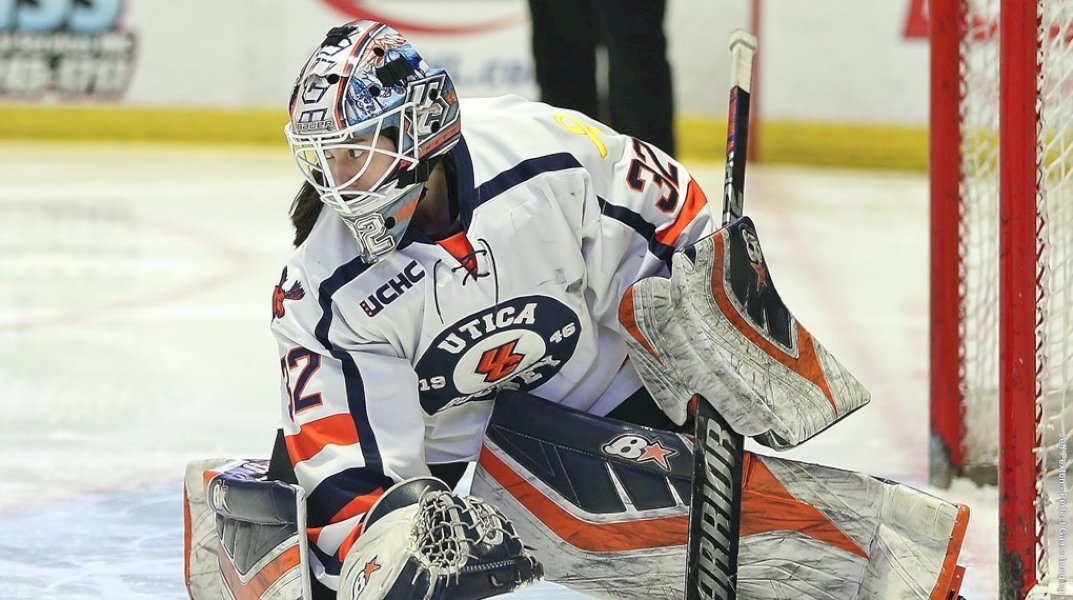 UTICA, NY – The Utica University women’s ice hockey team prepares for its 22nd season with a pair of exhibition tilts this weekend. The Pioneers will matchup with SUNY Canton on Friday at 7 p.m., before hosting No. 11 Norwich University on Sunday at the Adirondack Bank Center at the Utica Memorial Auditorium. Sunday’s game begins at 2 p.m.

Follow Along: As a preseason game, no live video or live stats are expected for Friday’s game at Canton. Saturday’s home leg of the weekend will feature both at portal.stretchinternet.com/utica/ or on the FREE Empire 8 conference app. Ray Biggs ’13 returns to lead game coverage for the vast majority of home games this season in his twelfth year, and will be joined by a rotating group of students throughout the year.

In the Polls: The Pioneers were selected to finish second in the UCHC Preseason Women’s Coaches’ Poll released on Wednesday. The team finished with 92 points, just six behind defending champion Nazareth, and received two first place votes. In the USCHO Women’s Top 15, Utica finished with 20 votes to sit as the top unranked team entering the season.

A Stable Staff: Head Coach Dave Clausen returns for his 22nd season and holds a win-loss record of 303-207-32 in his career. The 1998 Hamilton grad is assisted by Madyson Moore for a second season. Moore will coach against her former team this weekend, as she was part of the 2014 Norwich Cadets team that finished as the national runner-up. Former Hamilton women’s head coach and Syracuse University associate head coach Brendon Knight has also joined the staff this year.

Wrapping Up Last Year: The Pioneers set a new single season record for wins with a 21-6-0 overall record, and secured the second overall seed in the conference tournament with a 17-3-0 mark in the UCHC. They stayed in the regular season title race until the final weekend. The Pioneers advanced out of their conference quarterfinal against Alvernia, before falling in overtime in their semifinal matchup with Manhattanville by a 3-2 score. During the season, the Pioneers recorded a weekend sweep of a conference opponent eight times.

By The Numbers: Utica had a record-shattering season, and the team numbers were particularly dominant throughout the 2021-22 campaign. The Blue and Orange averaged 5.63 goals per game to rank second in the nation in scoring offense, and conceded just 1.44 goals per game to rank eleventh in scoring defense. On Special Teams, the Pioneers had the nation’s fifth-best power play at 29.5 percent, and the penalty kill unit was seventh at 90.9 percent. Just ten teams nationally were over 90 percent. The program set new single-season program records for wins (21), conference wins (17), goals (152), assists (252), points (404), goals per game (5.6), shorthanded goals (10), shutouts (10), and goals against average (1.4).

The Santullo Show: Graduate student Georgiana Santullo (Woburn, MA/Boston Shamrocks/Woburn High School) returns for her fifth year with the team on the heels of a record-breaking season that netted her UCHC Player of the Year and First Team All-American honors. Santullo reached new heights last season, as she broke the program’s single-season records for goals (29) and points (55), both of which stood for 18 years. She finished her senior season ranked first nationally in power play goals (nine), second nationally in goals per game (1.12) and third in points per game (2.12). Santullo also now owns the Utica single-season record for points per game, and she is tied for first in power play goals.  She also ranks sixth all-time with 105 career points.

Not Sloan Down: Alongside Santullo, senior Erica Sloan (Potsdam, NY/St. Lawrence Steel) also had an incredible 2021-22 season at forward. She finished her junior season tied for third all-time for points in a single season (52). Her 24 goals on the year also rank third in the program’s record book.  Sloan also racked up 28 assists to go along with a school record plus/minus of 49. Her 1.93 points per game placed her fifth nationally and fourth in program history. Sloan finished the year ranked fourth nationally with three short-handed goals. Her six points in a win over Stevenson marked the second-highest single game point total in the nation last season. She finished the season with four hat tricks, including a four goal outing in a win over Wilkes. Sloan was also fifth in the nation with 1.04 assists per game. She was chosen to the UCHC’s All-Conference First Team at the end of the campaign.

Between The Pipes: Junior goaltender Angela Hawthorne (Santa Clara, CA/Meijer) returns as the conference’s top netminder entering the 2022-23 season. The UCHC Goaltender of the Year finished her sophomore season with a 14-3 overall record and six shutouts to also land on the UCHC All-Conference First Team. Her six shutouts not only placed her fifth nationally, but were enough to rank second in a single-season in program history. Hawthorne’s .942 save percentage tied the program record, and her 1.22 goals against average is now first in Utica’s program history for a single-season.

Don’t Sleep on Stefanini: Junior forward Carly Stefanini (Framingham, MA/Brooks School) has averaged over a point a game in her first two seasons in Blue and Orange, with 18 career goals and 30 assists. Her 28 assists last season tied her for fifth in the nation with 1.04 assists per game, and marked a 26 assist improvement over her rookie year. She also maintained her goal scoring pace with twelve goals, which doubled her previous season’s total with just over twice the number of games. She was an Honorable Mention All-Conference pick.

Novo Said No Way: Junior defender Madison Novotny (Wesley Chapel, FL/Northwood School) was also named to the All-UCHC first team last season, and comes back to the roster as the bona fide leader of the defensive corps with Sirena Fitzery’s (Hamburg, NY/Buffalo Bisons) graduation. She set new career highs in goals (three), assists (15), and points (18).  She also helped lead the Utica defense which ranked second in the conference allowing just 1.44 goals per game.

Who’s New: The Pioneers have a very short list of newcomers this season. At forward is Kaci Ryder (Shrewsbury, MA/WC Swans ), Kelsey Elliott (Attleboro, MA/East Coast Wizards) can play either skater position, Tess Barrett (Tewksbury, MA/St. Mark’s) joins as an intriguing prospect on defense that could play big minutes right away, and Breese Burlingame (Binghamton, NY/Northfield Mount Herman ) shores up the goaltending depth and is the team’s tallest netminder at 6-foot-1.

About Canton: The Kangaroos return thirteen players from last year’s team that finished 13-10-1. Eight of the team’s top eleven scorers return for this season, including Lida Latinen (11-10-21), and Sarah Kosnaskie(10-10-20). Sirena Alvarez started 22 games for the Roos last year and had a goals against average of 2.14. Potsdam native Kalie Grant is the team’s new head coach after spending the last two seasons with head coach Shawn Skelly at Adrian.

About Norwich: The nationally-ranked Cadets should provide a good test for Utica on Sunday. They finished with an overall record of 19-8 last season, including a 15-3 record in NEHC play under head coach Sophie LeClerc Doherty. A veteran group of players is led by Mikah Baptiste and Ann-Frederique Guay, who each had 30 points last season.