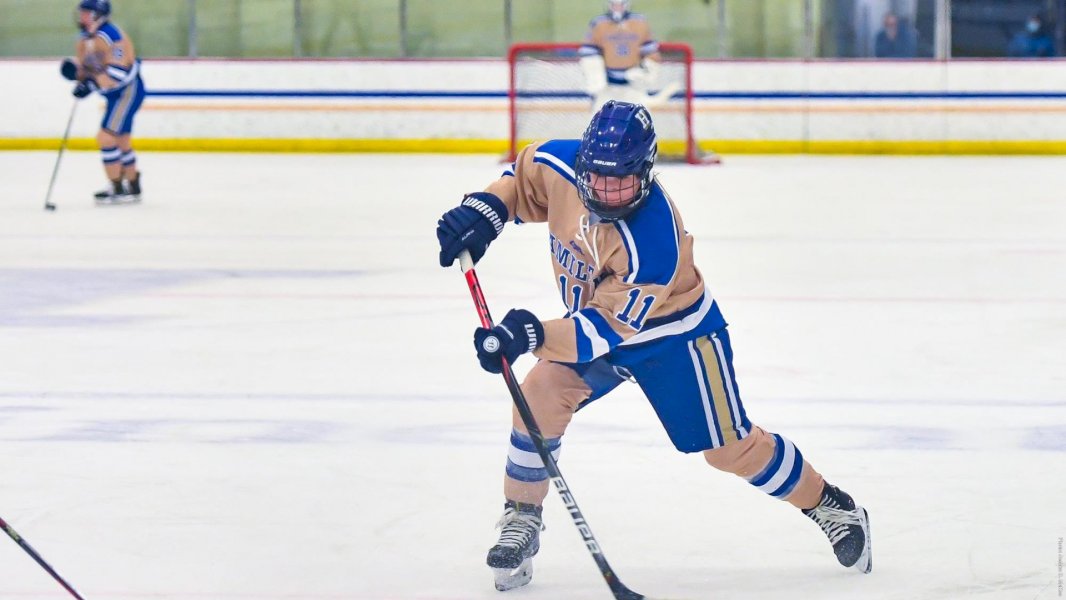 The Hamilton College Continentals rallied with three unanswered goals in the third period for a 4-3 non-conference win against the Morrisville State College Mustangs on Tuesday afternoon inside Hamilton’s Russell Sage Rink.

The Continentals (3-0-0 overall), who received votes in this week’s USCHO.com Division III Top 10 coaches poll, out-shot Morrisville State 44-17. Hamilton didn’t take the lead until there was 2:53 left in the third period. The Continentals are back home again on Sunday, Nov. 28 for another non-conference game against Utica College at 3 p.m.

Morrisville (2-5-1 overall) went up 1-0 at 8:02 in the first period when Rhys Brown skated the puck all the way down and scored through the five hole.

Hamilton tied it up 34 seconds after the puck dropped in the second period. Abby Kuhns ’23 picked up a rebound that bounced off Christina Spanier ’25 in the Continentals end and went coast-to-coast. Kuhns put it in bar down from the top of the blue line for her first goal this season.

The Mustangs capitalized 2:25 into the third period after a Hamilton penalty and scored again just 42 seconds later for a 3-1 lead.

Abby Smith ’24 started the Continentals’ rally at 6:08 in the third period. Maddie Hong ’23 won the faceoff and passed the puck back to Nancy Loh ’23 who took a shot that got caught up in front of the net. Smith poked in the rebound for her second goal.

Maura Holden ’23 tied the score at 3-3 on her first goal this season with 8:15 left in the third period off a pass from the point by Mya Berretta ’22.

Berretta scored the game winner for her first goal and third point this season. Lisa Ito-Bagshaw ’25 fed the puck to Claire McGennis ’24 who passed it to Berretta behind the net. Berretta snuck it past goaltender Mak Ganje into the bottom-left corner of the net.