Women’s hockey off to historic start 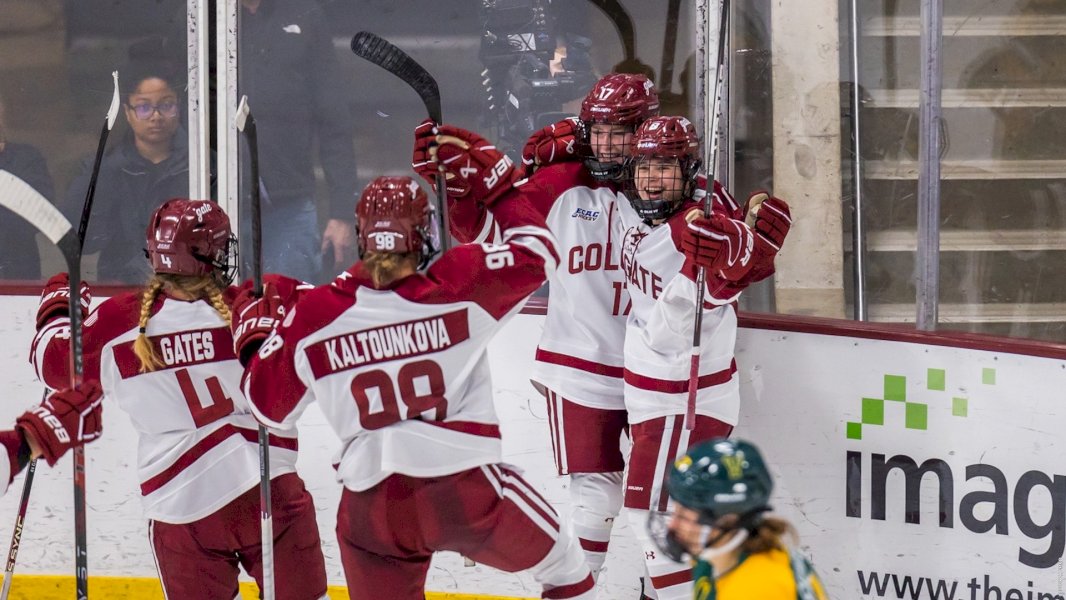 Colgate women’s ice hockey is off to its best start in program history.

By sweeping Vermont in a two-game bout over the weekend, Colgate improved to 9-0 just one month into the new season. The team also climbed to No. 4 in the nation after previously ranking sixth.

Head Coach Greg Fargo said he’s not surprised with the program’s start because he knew he had a talented team coming back this year.

Fargo said players have bought into the team’s philosophy, which includes hard work at each practice and getting better by the day.

“The record is great, but I’ve been really more impressed with the mentality and the leadership on the team — just how focused they’ve remained,” Fargo said. “Regardless of what the outcome was the weekend prior, we’ve always showed up ready for practice, focused on what’s ahead of us.”

Fargo said his team is hungry to improve, accepting new concepts and putting them into action. Much of that has to do with the team’s veterans, who have had a big influence on the younger players.

This year’s squad is younger than past teams. Of the 25 student-athletes on the roster, 13 are freshmen and sophomores. But the team’s veterans are leading by example, on the ice and in the locker room.

Colgate’s depth has become a major strength, thanks to a roster full of talent. Defensively, the Raiders are sound, with forwards committed to rushing back to protect their net.

“Up and down our lineup, the entire team has been committed to playing the right way,” Fargo said.

Goaltending has been exceptional, with Hannah Murphy and Kayle Osborne combining for five shutouts. The two goalies were together last season, when Colgate finished with a 30-8-1 record.

They were together again over the summer when they made the Canadian national development team, joining an elite group of hockey players.

This year’s team might be the fastest group Fargo has coached in his 11 seasons at Colgate.

“We are a lot quicker, a lot faster than we’ve ever been,” Fargo said. “We are trying to take advantage of the team’s speed.”

While expectations are high for a program that was ranked first in a preseason ECAC Hockey poll, coaches have stressed approaching the season one practice — and one game — at a time.

“It has been great getting off to a 9-0 start,” said Danielle Serdachny ’23, team captain and leading scorer. “We have a great team with a lot of depth this year in every position. We are satisfied with the way we have started the season, but we want to continue to take things one game at a time.”

Allyson Simpson ’23, a defenseman and senior, said a crucial part of the team’s success has been creating a culture where everyone is committed to hard work.

“It was important for us to build connections, relationships, and on-ice principles early in the season so that we set our team up for success further down the road and I think our record so far reflects this,” she said.

“I feel like this team has bought into the way that we want to play as a program, which gives us confidence and trust in each other to do the little things and everything in between,” she said. “Everyone is willing to embrace their roles and do them to the best of their ability.”

The team’s schedule is about to get tougher. Colgate will begin conference play this weekend by heading to No. 10 Princeton and No. 7 Quinnipiac. In November, the Raiders will travel to Ohio State for two games against the defending national champion Buckeyes.

But with a squad that’s full of confidence and firing on all cylinders, Colgate is ready for the test. Colgate’s most recent victory became Fargo’s 200th win behind the bench. He’s the program’s winningest coach.

He attributes his success to the people around him.

“I’ve had really good players,” he said. “Coaches don’t win games, players do. Also, the staff I’ve been part of. I’ve been fortunate to be surrounded by really great people, who see the vision of the program and they live and breathe it.”