Women’s hockey loses offensive shootout to No. 9 Colby in overtime 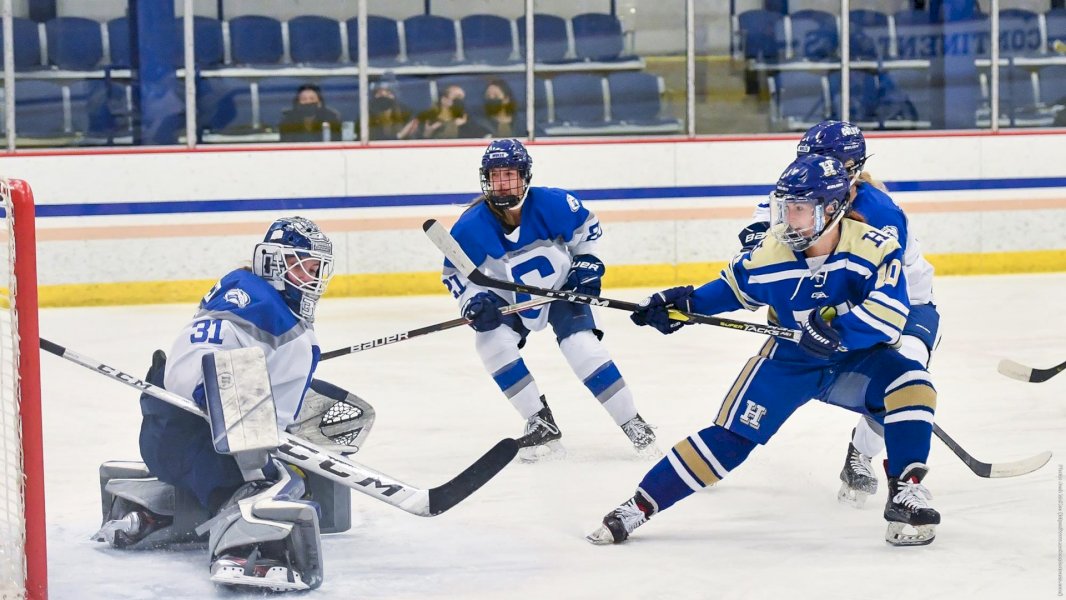 Colby College’s Jillian Mazzocca scored 68 seconds into the sudden-victory overtime period and lifted the Mules to a 5-4 win against the Hamilton College Continentals at Hamilton’s Russell Sage Rink on Friday night.

The Continentals (8-7-0, 5-6 NESCAC) were led by Allie Curry ’23, who scored two goals for the second time this season. Hyla Mosher ’23 chipped in two assists and won 11 of 16 faceoffs. Katherine Solohub ’23 blocked four shots and Emily Ferguson ’24 added three. Hamilton and Colby will play again at Sage Rink on Saturday, Feb. 5 at 3 p.m.

The nationally ranked No. 9 Mules (12-3-0, 8-3) received a goal and two helpers from Meg Rittenhouse, and a goal and an assist from Anna Staton. Rittenhouse also won 7 of 10 faceoffs. Colby owned a 34-16 shot advantage while both teams were 0-for-2 on the power play.

Rittenhouse gave the Mules a 1-0 lead just 2:29 into the first period. The Continentals responded with three straight goals including Curry’s first of the night at 6:32 in the period when she poked in a loose puck at the left post.

Abby Kuhns ’23 put Hamilton in front at 4:09 of the second period with her second goal this season. Kuhns collected a loose puck in her defensive zone, skated into the attacking zone and launched a high wrist shot from the point that settled into the back of the net. Curry made it 3-1 at 6:27 of the second with her fifth goal. She took a pass at center ice and skated into the low slot where she lifted a nifty backhand shot past Colby goaltender Nina Prunster (12 saves).

The Mules responded with a three-goal run that started with 3:58 left in the second on a goal by Colleen Donoghue. The Continentals continued to cling to their one-goal lead until Staton tied the score with 5:55 remaining in the third period. McKinley Karpa put Colby in front again 22 seconds later.

Hamilton pulled Sidney Molnar ’22 (29 saves) in favor of an extra skater with 1:51 to go and the move paid off 31 seconds later. Mosher won a faceoff to the right of the Mules’ goal and Nancy Loh ’23 eventually stuffed in the loose puck at the left post. Loh is second in the NESCAC with 11 goals. Mosher is tied for the team lead with eight assists. Colby took all three shots between the teams in overtime.