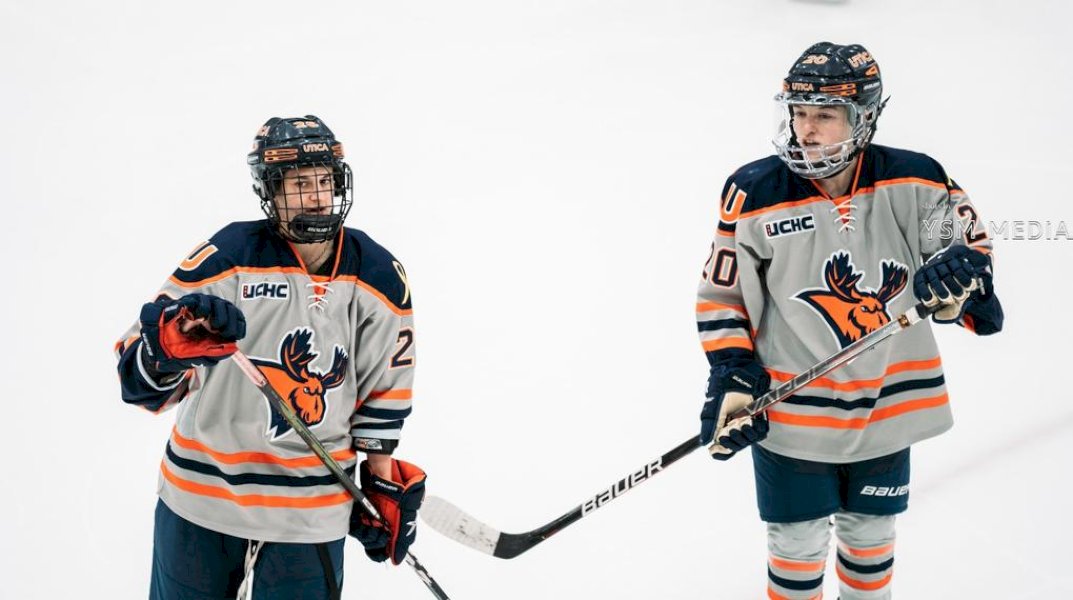 Follow Along: Those unable to attend Tuesday’s game can keep up with live video/stats through https://portal.stretchinternet.com/utica/. On Friday and Saturday, Chatham will provide live video through https://www.pacdigitalnetwork.com/chatham/ and live stats at https://gochathamcougars.com/sidearmstats/whockey/summary.

Last Time Out: The No. 14 Utica University women’s hockey team beat Worcester State 2-1 in overtime on Friday night. With the win, Utica extended its winning streak to eight straight games. The Pioneers created opportunities early as Erica Sheaffer (New Hartford, NY/Wilkes University) and Hailey Modlin (Phoenix, AZ/Boston Shamrocks) fired shots on goal within the first two minutes. Utica outshot Worcester and was in the attacking zone for the majority of the period yet could not break through. The period ended 0-0 and Utica looked to keep its aggressive play style going into the second period. Worcester put the pressure on early as Katie Puumala fired a shot on goal yet was denied by Angela Hawthorne (Santa Clara, CA/Meijer). The Lancers were able to keep the puck in the attacking zone and Clare Conway found the back of the net 59 seconds into the period for a 1-0 edge. There were four power plays in the period and the Lancers drew three of them, yet the Utica defense was able to deny Worcester of a shorthanded goal to keep the game at 1-0 entering the final period of play. The teams exchanged shots for the first few minutes of the frame before Utica earned a power play at the 4:50 mark of the period. The Lancers were able to keep the Pioneers from scoring on the power play. However, at the 9:46 mark of the period, Abby Lillis (West Seneca, NY/Buffalo Bisons) was able to knot the game at 1-1 off of a beautiful short handed goal assisted by Georgiana Santullo (Woburn, MA/Boston Shamrocks/Woburn High School). The game would remain tied and head to overtime. The Pioneers outshot the Lancers six to one in overtime and Erica Sloan (Potsdam, NY/St. Lawrence Steel) delivered the game winning goal at the 2:26 mark of the extra period. The goal was assisted by Georgiana Santullo (Woburn, MA/Boston Shamrocks/Woburn High School) and Tess Barrett (Tewksbury, MA/St. Mark’s). Utica outshot Worcester 42-17 and won 42 faceoffs compared to 19. Angela Hawthorne (Santa Clara, CA/Meijer) continued her wonderful season in net and had sixteen saves and just one goal allowed. Her impressive performance moves her to 7-1-1 in net this season. Georgiana Santullo (Woburn, MA/Boston Shamrocks/Woburn High School) led the team with two points while Erica Sloan (Potsdam, NY/St. Lawrence Steel), Abby Lillis (West Seneca, NY/Buffalo Bisons), and Tess Barrett (Tewksbury, MA/St. Mark’s) each recorded one point. Sloan has now recorded at least one point in ten of the team’s eleven games this season. Santullo and Sloan have each recorded at least fifteen points this season and have been a dynamic duo for the Pioneers this season.

Sloan in the Clutch: Erica Sloan (Potsdam, NY/St. Lawrence Steel) continues to be a force this season and has been consistently making plays in the clutch. In the team’s comeback against Worcester, Sloan netted a beautiful goal in overtime to give the Pioneers its eighth straight victory. Sloan now has 16 points this season and recorded a point in ten of eleven games this season. Her 16 points has her tied for sixth in the UCHC.

Georgie’s World: Georgiana Santullo (Woburn, MA/Boston Shamrocks/Woburn High School) continues her terrific career and has totaled 15 points this season. The graduate student has netted six goals and dished out nine assists this season. Santullo played a huge part in the team’s comeback win over Worcester as she assisted both of the team’s goals and has been creating opportunities for her teammates at will.

About Oswego: Lakers are 9-5-1 this season and 7-2-1 in the NEWL while also having dropped out of the USCHO top 15 poll this week. In the team’s last outing on Saturday, it tied with SUNY Canton 0-0. Oswego is led by Ashlyn McGrath who has totaled 11 goals with five assists this season. Mack Hull is another playmaker as she has netted nine goals with five assists. Ariella Haas has been the team’s top facilitator dishing out nine assists this season. Simone Bednarik and Kensie Malone are two names to look out for as both have scored at least two goals with seven assists. Lexi Levy is 7-4-1 in games this season and sports a .929 save percentage with 288 saves.

A Look at Chatham: Chatham is 7-7-1 this season and 6-3-1 in UCHC play ranking them in fourth place. In its last outing the team beat Wilkes on Saturday 6-3. The team is led by a trio of phenomenal players each with at least fifteen points this season. Allison Corser-James has totaled a team-high fourteen goals. Ally Nolan leads the team in points with thirteen goals and ten assists. Brooke Almond is the team’s top facilitator with a whopping fifteen assists and creates plenty of opportunities in front of the net for her teammates. In net, Chatham has been a rotation of goaltenders with Lily Rogers seeing most of the time. Rogers is 3-5-1 this season with 319 saves with an .891 save percentage this season.