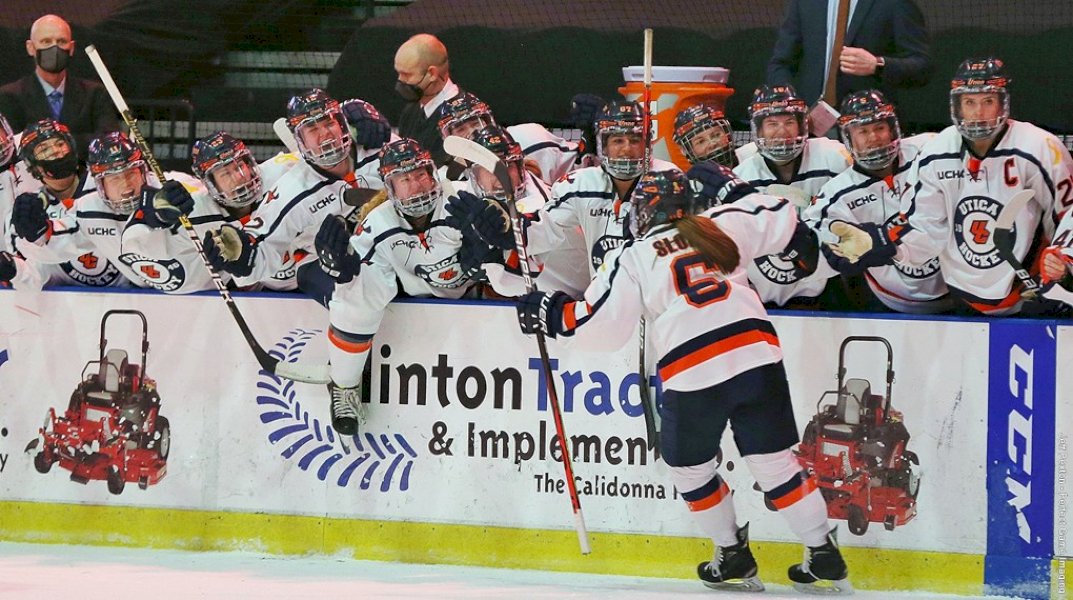 UTICA, NY- The Utica College women’s hockey team hits the ice for the first time this season as it hosts SUNY Cortland in a preseason exhibition tune-up Thursday evening.  Puck drop is scheduled for 7 p.m.

Follow Along: Live video and stats for all UC home games are available at portal.stretchinternet.com/utica/.

BEFORE YOUGO:  As it presently stands, Utica College home games will follow the same COVID-19 policies in place in the arena for Utica Comets home games at the Adirondack Bank Center at the Utica Memorial Auditorium. Fully vaccinated guests are encouraged to wear a face covering. Guests who are not fully vaccinated are required to wear a face covering when not eating or drinking. Please note that these policies may be subject to change in the future. Limited tickets may be available at the door, and are also available online at empirestatetix.com.

LOOKING BACK: The 2020-21 season was condensed due to the COVID-19 Pandemic… Utica played 13 games on the year, eight of which were United Collegiate Hockey Conference contests… The Pioneers finished 6-7 on the season (4-4 UCHC) and qualified for the postseason for the 19th time in the program’s 20-year history… Utica fell to Nazareth in the conference quarterfinal.

SCHEDULE AT A GLANCE: Utica’s schedule features 20 games against UCHC opponents and five non-conference match ups… The Pioneers will open up regular season play on Oct. 30 against familiar foe, Elmira College, which will be competing in a different conference than UC for the first time ever… Utica will also take on Hamilton College, Morrisville State, Middlebury College, and Oswego State as non-conference opponents… Utica’s conference schedule features familiar foes Chatham, Neumann, Manhattanville, Lebanon Valley, Nazareth, Wilkes, Stevenson, and Kings, as well as newcomers Arcadia and Alvernia.

BEHIND THE BENCH: Head Coach Dave Clausen returns for his 21st season at the helm for Utica… Clausen is the first and only head coach in the history of the Utica College women’s ice hockey program…  While building a nationally recognized program at UC, he has compiled an impressive overall record of 282-201-32…  Clausen has rallied UC to a 154-78-11 ledger at the friendly confines of the Utica Memorial Auditorium, while guiding his squad to a playoff berth in 19 of 20 seasons at the helm… He has been named Coach of the Year three times by his respective conferences (twice by the ECAC West, once by the UCHC)… He has coached five All-Americans and three of his players have gone on to play professionally… New to the coaching staff this year is Madyson Moore… Moore played collegiately at New England College for two years before transferring to Norwich University, where she was part of the Cadet’s run to the National Championship game in 2014… Moore spent last season as an assistant coach at Plymouth State University.

WEARING THE “C”: Graduate student Rebecca Brown (Steamboat Springs, CO/Norwich University) and senior Georgiana Santullo (Woburn, MA/Boston Shamrocks/Woburn High School) will serve as co-captains this season… This marks the second straight season that Brown was chosen as team captain… She has suited up in 70 games for the Pioneers and has totaled 49 career points (20 goals, 29 assists)…  Santullo, an assistant captain last season, is second among active players with 65 games under her belt… She leads all returners with 50 career points (23 goals, 27 assists).

NO SOPHOMORE SLUMP: Last year, the team was led by now-juniors Erica Sloan (Potsdam, NY/St. Lawrence Steel), Carolyn Whitney (Raleigh, NC/Milbrook School), and Maggie Rylott (Cobourg, Ontario/West Northumberland)… Sloan had a team-high six goals and 14 points in 13 games… Whitney and Rylott each totaled four goals and nine assists for 13 points… Whitney has finished in the top three in scoring in each of her first two seasons and she and Sloan have identical numbers (13 goals, 16 assists) to their stat lines… Rylott had a breakout season last year and she currently has 21 career points (eight goals, 13 assists) in 39 games.

ADJUSTING WELL: Carly Stefanini (Framingham, MA/Brooks School), Angela Hawthorne (Santa Clara, CA/Meijer), and Madison Novotny (Wesley Chapel, FL/Northwood School) wasted little time making a name for themselves as the trip was named to the UCHC All-Rookie team… Stefanini tied for the team lead with six goals last year, and had the third-highest goal total among UCHC rookies. She had two power play goals and also added a game-winner while appearing in all thirteen games… Novotny played all thirteen contests on the Utica blue line and had three assists. Her efforts cleared the way for both Pioneer goaltenders to receive recognition last year, as Utica held opponents to just 2.38 goals per game… Hawthorne stepped right in and delivered during her rookie season with a record of 4-2 overall. She had a goals against average of just 2.01, and a save percentage of 92.1 percent. She recorded the team’s lone shutout of the season.

BETWEEN THE PIPES: Utica’s depth in goal packs a one-two punch… Apart from Hawthorne, senior Savannah Gutierrez (Huntington Beach, CA/Anaheim Lady Ducks) is coming off her first All-Conference nod as she was named second team All-UCHC… Gutierrez had the conference’s fourth-highest save percentage at 92.5 percent… She was 2-5 in seven starts, but made four starts against Elmira and Nazareth… Highlighting her season was a 52-save performance in a 2-0 loss to Nazareth, and a 37-save night as Utica secured a win against previously unbeaten, Elmira College… Sophomore Maddie Esposito (Ashburn, VA/Boston Shamrocks) will look to challenge Hawthorne and Gutierrez.