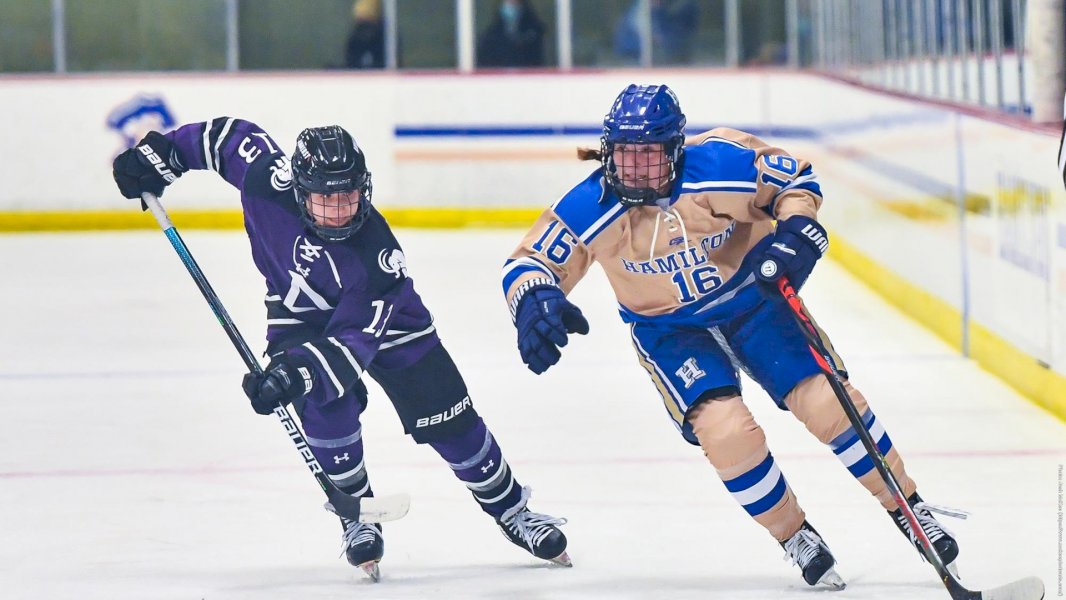 Hamilton (8-6-0, 5-5 NESCAC) entered the day in third place in the conference standings with 16 points. Katherine Solohub ’23 was credited with seven blocked shots, and Sidney Molnar ’22 made 41 saves. Molnar had 18 of those stops in the first period when she was able to keep the Panthers at bay early.

Nationally ranked No. 1 Middlebury won their 15th game without a loss and improved to 10-0 in the NESCAC. The Panthers outshot Hamilton 46-18. Sophie Merageas turned away 17 shots, including 10 in the second period. Middlebury completed the weekend sweep as the Panthers also edged the Continentals 2-1 on Friday night.

Scoreless through the first stanza, Hamilton struck first 2:37 into the second period on a power-play goal by Maura Holden ’23. After a tripping penalty on Middlebury, the Continentals controlled the puck and Nancy Loh ’23 snapped a shot that was denied by Merageas. Hamilton hustled to keep the puck on their side of the ice and set up again. Loh sniped a pass to Zoe Katz ’24 and Holden snuck a shot past Merageas on the far-left side of the net. Holden is second on the team with six goals and 13 points. Loh has eight assists and is tied for second in the NESCAC with 18 points. Katz collected the first assist of her collegiate career.

Middlebury quickly responded just 23 seconds later on a goal by Ashley McDonald, assisted by Maddie Bayard and Cat Appleyard. The Panthers took the lead for good at 4:05 in the second on a goal by Cece Ziegler and assists from Eva Hendrikson and Madie Leidt.

The Panthers added three goals in the third period, including two on the power play. Leidt and McDonald finished with a goal and an assist apiece. Leidt leads the conference with 21 points.

Hamilton returns to the ice on Friday, Feb. 4 at 7 p.m. for the first game of a two-game series with NESCAC foe Colby College (10-3, 6-3) at Russell Sage Rink. The Mules sit in second place in the conference standings with 18 points.