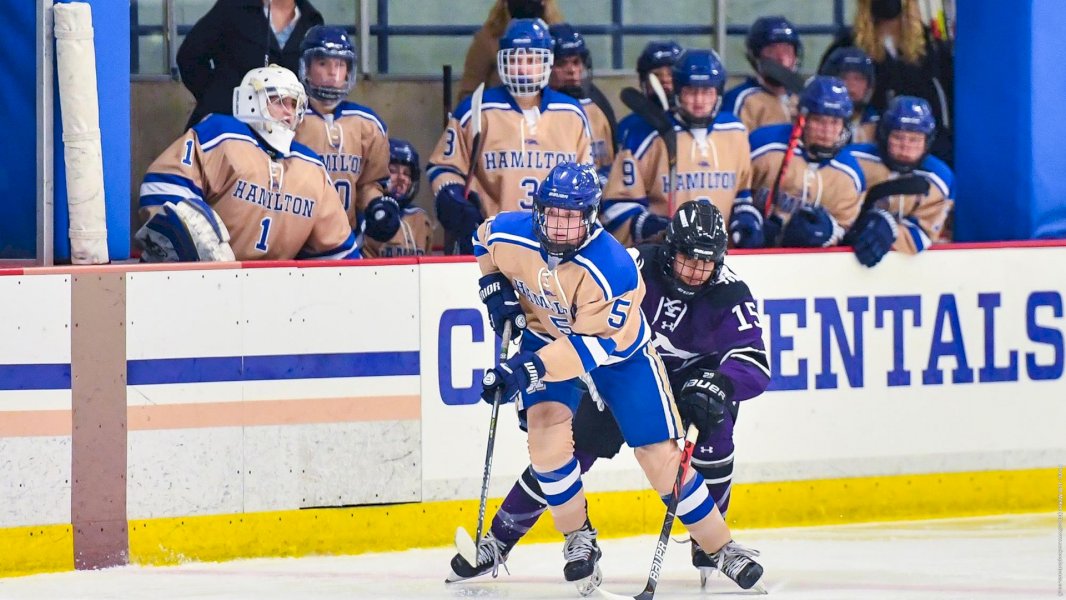 Bowdoin College built a 4-0 lead and the Polar Bears went on to a 5-2 NESCAC win against the Hamilton College Continentals at Bowdoin’s Watson Arena on Saturday afternoon.

Hamilton, which blanked the Polar Bears 4-0 on Friday night, dropped to 6-4-0 overall and 3-3 in the conference. The Continentals scored their goals 36 seconds apart early in the third period. Hamilton is back on the road on Friday, Jan. 14 when the Continentals take on Trinity College for another NESCAC game at 7 p.m.

Bowdoin evened its overall record at 5-5-0 and improved to 2-4 in the conference. Izzi Stoddard led the offense with two goals and an assist, and Allie Britt contributed a goal and two helpers. Meg Miranda turned away 31 shots as Hamilton held a 33-22 shot advantage.

Zoe Wilson put the Polar Bears on the board with 4:57 left in the first period and Jane McCarter added a power-play goal in the final seconds of the period. Britt made it 3-0 just 66 seconds into the second period, and Stoddard increased the cushion to four goals at 1:29 of the third.

Hyla Mosher ’23 finally broke the ice for the Continentals at 2:20 of the third with her second goal and seventh point in seven games this season. Mosher scored out of a scrum near the crease as Nancy Loh ’23 and Maura Holden ’23 picked up assists. Loh leads the team with 12 points.

Sami Quackenbush ’24 scored her first goal at Hamilton five seconds into a power play. Maddie Hong ’23 won the faceoff to Quackenbush and she fired a shot from the high slot past Miranda.

The Continentals pulled goaltender Sidney Molnar ’22 (17 saves) for an extra skater with 2:35 remaining, but Stoddard added the empty-net goal with 53 seconds to go. Hamilton mustered one shot on goal while Molnar was on the bench.