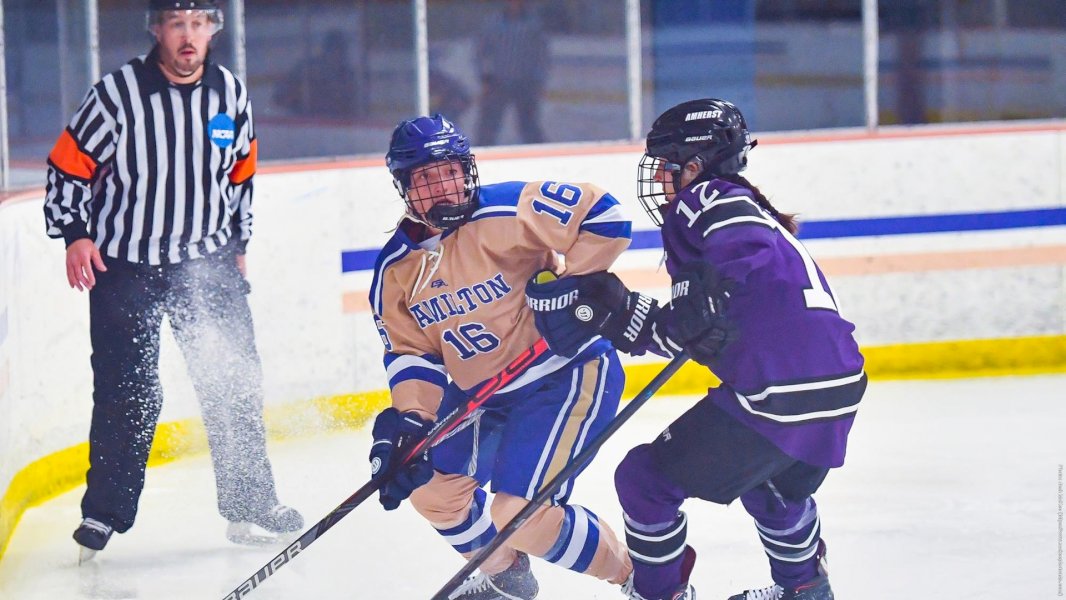 Hamilton improved to 8-4-0 overall and 5-3 in the conference with the weekend sweep. The Continentals edged Trinity 4-3 in Hartford, Conn., on Friday night.

Holden and Nancy Loh ’23 scored a goal and added two assists apiece. Loh leads the NESCAC with 17 points and is tied for the lead with 10 goals. Hyla Mosher ’23 and Sami Quackenbush ’24 chipped in a goal and an assist apiece. Bobbi Roca ’24 won 9 of 13 faceoffs. Sidney Molnar ’22 made 14 saves including 10 in the third period. Molnar has a 1.78 goals against average and .929 save percentage.

Loh scored four minutes into the first period. Mosher took the puck off a Trinity stick in the defensive zone and passed to Holden, who took it up the center before dropping it back for Loh. She grabbed the puck between the dots and fired a quick shot to the top of the net for the 1-0 lead.

Loh added an assist on Holden’s goal midway through the second period. She took possession of the puck at the blue line and rushed up the left wing. As Loh approached the net, she shifted to what looked like a backhand shot before sending a pass to the front of the crease. Holden caught the puck just before Leclair could cover it, and knocked it backhand into the net for her fifth goal and a 3-1 lead.

Mya Berretta ’22 put Hamilton in front for good at 10:16 in the first. Berretta grabbed the puck from Quackenbush at neutral ice and rushed up the left side ahead of the defense. As she approached the net, she cut in towards the crease and fired a quick wrist shot to the far side for her third goal.

Quackenbush padded the Continentals’ lead on her second goal this season with 5:09 left in the second. Maddie Hong ’23 passed the puck back to Abby Smith ’24 in the corner. Smith continued to cycle the puck, passing to Quackenbush at the blue line. She took the puck forward and fired a slap shot through traffic that bounced in at the goal line.

Hamilton came into the third period hot, with Mosher scoring the Continentals’ fifth goal 30 seconds into the period. Holden had a breakaway opportunity and her shot was stopped by Leclair, but the puck remained loose in the crease just shy of the goal line. Before a defender was able to knock it away, Mosher rushed in and knocked it into the empty net for her third goal.

Trinity’s lone goal came at 6:38 in the first period. Hannah Feinburg caught Molnar behind the net, grabbed the puck and threw it to the middle of the zone. Martina Exnerova caught the pass in the center and fired a shot into the empty net.

The Continentals will play nationally ranked Endicott College twice on the road next weekend, with the first game on Friday, Jan. 21 at 6 p.m.

Raiders Come Back To Win in OT Thriller