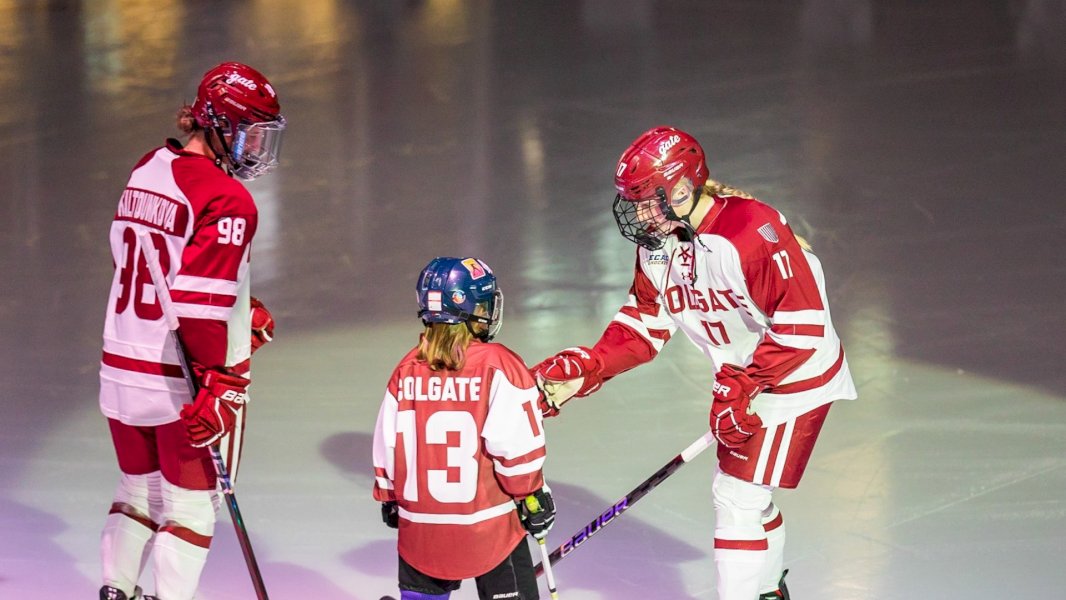 On a Sunday afternoon in September, 50 exhilarated young girls arrived at the Class of 1965 Arena to meet their new mentors — members of the Colgate women’s hockey team.

The children, many dressed in hockey jerseys, took photos with the players and bonded over fresh slices of pizza. They received T-shirts, and went home with memories that they’ll keep for a long time.

The event kicked off a new program called Rising Raiders, which connects each of the 25 members of the women’s hockey team as mentors for local girls ages 6 to 14.

“We want our players to be role models that young girls can look up to and aspire to be one day,” said assistant women’s hockey coach Chelsea Walkland. “For our players, they really enjoy giving back. It wasn’t too long ago that they were kids themselves, and could probably pinpoint someone who impacted their careers and inspired them to pursue the path that they have gone.”

Two children take a photo with their new mentor, Maggie MacEachern ’23.Walkland had worked with similar mentor programs when she was an assistant coach for the women’s hockey teams at Robert Morris and the State University of New York at Oswego.

It began over the summer when the team contacted the heads of youth hockey programs within a two-hour radius of Hamilton, asking them to spread the word. When registration began, all 50 Rising Raiders’ spots were filled in days.

The program allows each participant to attend a home game as either a “Raider of the Day” or “Youth Manager of the Game.” The two groups are based on the age of the child.
AAl

Allyson Simpson ’24 and her mentee.Children selected as a “Raider of the Day” have their names announced during the starting lineup and get to join the team on the ice.

The “Youth Manager of the Game” works behind the scenes by arranging pucks and sticks, and bringing water bottles to the bench. The child also gets to watch on-ice warm-ups from the Raiders’ bench and meet the team.

“The goal of both of these opportunities is to get our young participants as many opportunities to interact directly with our team as possible,” Marsh said. “We pull back the curtain for them and let them and their families see what our players see as they prepare for game day.”

The team plans to host two hockey clinics over the winter for children in the program. The goal is to offer Rising Raiders to new girls each year.

“We believe that this is a great opportunity for girls in the sport to have mentors and to have people they can look up to,” Serdachny said. “We also think it’s an awesome opportunity to help grow the game. It is always good to give back to the game of hockey in any way possible, and I believe this program allows us to do so.”

The reactions from children have ranged from hyper to excited to shy and nervous. But for each of them, it was an experience to remember.

“I’ve received a lot of feedback from the parents who say their daughters are talking about game day for days or even weeks afterward and that they already want to come to Colgate when they’re older,” Marsh said.

“The impact our players are making on their mentees already is astonishing, and is a daily reminder that these bonds matter and will be long-lasting.”