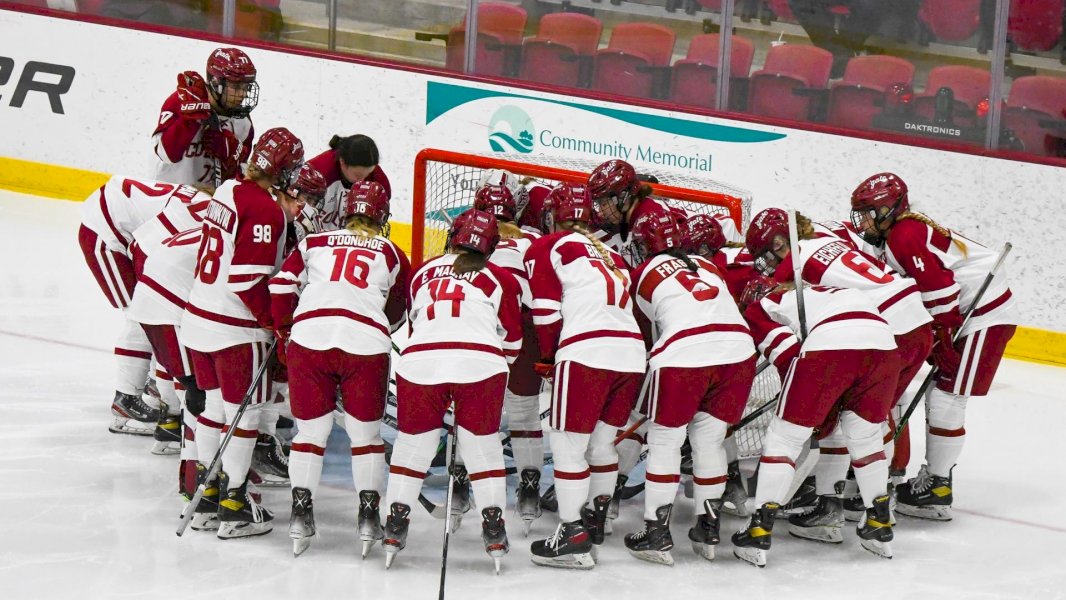 Senior Malia Schneider was named this year’s recipient of the Don Palmateer Award. A three-year captain for the Raiders, Schneider logged 13 points by three goals and 10 assists this season. She also recorded 17 blocked shots and a +6 rating. Schneider was very involved off the ice during her time at Colgate. This year she volunteered at a local food bank, helped with the Raiders’ autism awareness game, and spent time at local schools. In the past, she has volunteered with Colgate’s Learn to Skate program, helped teach floor hockey, and worked with children from Pathfinder Village.

In 1974, during the inaugural club hockey season, the members of the newly formed women’s hockey team at Colgate recognized Don Palmateer as the “driving force” behind getting the women’s club team off the ground. In his role, as the Director of Intramural and club sports, Don believed that “the sky was the limit” for the women’s hockey club. Don was a pioneer in establishing the club we all know well today. The Don Palmateer award is given annually on behalf of the Center Ice Club to the player whose leadership, inspiration, and performance on and off the ice throughout her career has had the greatest impact on the Colgate Women’s Ice Hockey program.

Danielle Serdachny was named the Raiders’ Offensive MVP for the third year in a row. The junior tallied 53 points on her way to ECAC Hockey Second Team All-League honors. She broke the program record and finished tied for third in the nation in assists with 38 this season. Additionally, Serdachny’s point total ranked ninth-best in the nation and tied for first in the conference. The Raiders’ assistant captain also recorded 391 faceoff wins, good for seventh-best in the country. Serdachny was a two-time ECAC Hockey Player of the Week and earned Player of the Month for October.

Brad Houston served as the first-ever varsity women’s hockey coach at Colgate from 1995-99 as the program made the transition from club to varsity status. Today, the Offensive Player of the Year is awarded annually in Brad’s name. It is given to the player at the forward or defense position who demonstrated the greatest all-around offensive ability throughout the season.

Junior Allyson Simpson earned Defensive MVP after finishing second on the team in blocked shots with 49. She also tallied 20 points in 33 games this season, finishing third in goals (eight) and tied for fifth in points among defenders in ECAC Hockey. Additionally, Simpson’s +27 rating was tied for fourth-best overall in the conference. The blueliner scored two game-winning goals this season, including one that helped the Raiders to a 4-3 win over Quinnipiac in the ECAC Hockey semifinals.

Rookie of the Year – Hannah Murphy

After a standout first season, Hannah Murphy was named Rookie of the Year. Murphy accumulated a 17-3-0 record and her .850 win percentage led ECAC Hockey and was third-best in the nation. Behind four shutouts, she posted a 1.49 goals-against average that ranked fourth-best in the conference and eighth nationally. She earned ECAC Goalie of the Week and Rookie of the Week on Nov. 29 after helping the Raiders win the Smashville NCAA Showcase with victories over Boston College and No. 3 Minnesota. Murphy was also named the conference’s Rookie of the Month for February.

First year Lauren Fraser made exceptional growth this season helping her earn Most Improved Player. Fraser worked hard both on and off the ice to make improvements in her game. She made five appearances for the Raiders this season. In her collegiate debut, Fraser helped Colgate to a 7-1 win over Brown. She also played in the Raiders’ big victories over Boston College and Cornell.

Senior Delani MacKay was this year’s recipient of the Sportsmanship Award. She was given the honor for exemplifying the attributes of character, integrity, and sportsmanship throughout her four years as a Raider. Behind five multi-point games, MacKay notched eight goals and 10 assists playing in all 39 of Colgate’s games this season. Her +22 rating was tied for fourth-best on the team. She also blocked 17 shots and recorded a .591 faceoff win percentage.

Presented to a player who exudes what it means to be a member of the Colgate women’s hockey program, senior Rosy Demers was presented with the Core Values Award. Demers was a leader in the Raiders’ program serving as an assistant captain this past season. During her senior campaign, she tallied 23 points notching six goals and 17 assists. The forward also netted four power-play goals and two game-winning goals that helped the Raiders to victories over Boston College and Princeton.