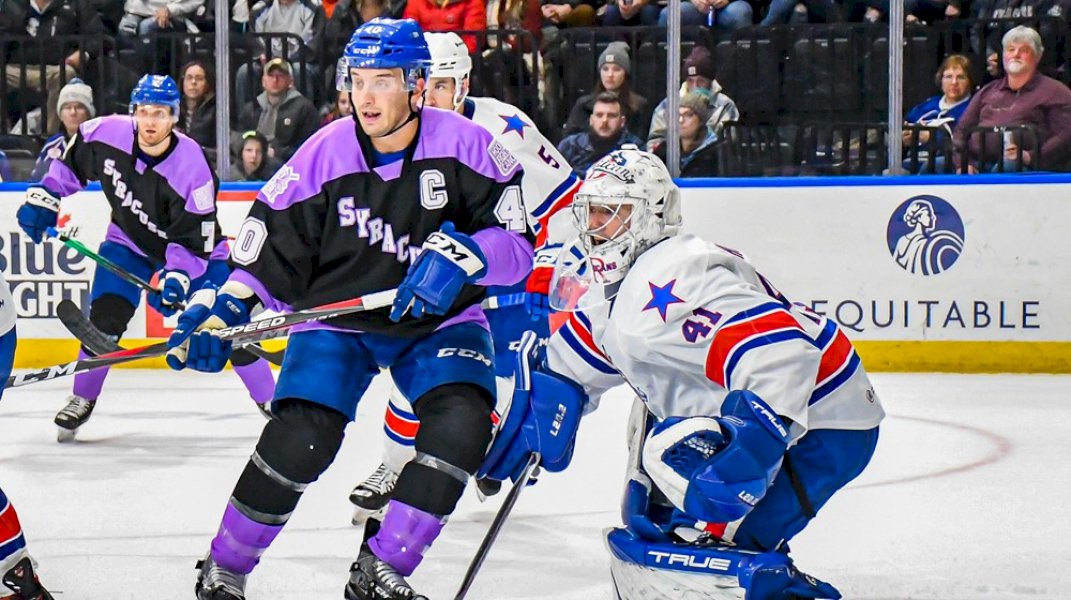 CRUNCH TURN THE PAGE ON NOVEMBER

The Crunch picked up one win during their three-game homestand in Week 7 to finish off November.

Syracuse dropped the opening game of the week Wednesday against the Belleville Senators. The team went down 3-0 early in the second period, and their attempted comeback came up short in the third period.

The Crunch snapped a six-game winless (0-4-1-1) spell with Friday’s 4-1 win over the Lehigh Valley Phantoms. Gabriel Dumont led the way with three points as the Crunch earned a sweep of the two-game season series.

Saturday’s weekend finale saw the Crunch fall to the Rochester Americans, 4-2, in a game that saw five power-play goals and one empty-net tally.

Syracuse squares off against Rochester and Wilkes-Barre/Scranton in a three-game week to open December in Week 8.

Newly-named captain Gabriel Dumont led the Crunch in scoring in Week 7 with five points in three games. His week started with a goal Wednesday against Belleville. He was announced as the Crunch’s captain for the second time in his career (also 2018-19) prior to Friday’s game against Lehigh Valley. That night, he carried the Crunch to a 4-1 win with a season-high three points (1g, 2a). He capped the week with another goal Saturday against the Amerks.

Dumont enters Week 8 riding a three-game goal scoring streak for the second time this season; he logged a goal in a career-best four straight games earlier this season (Oct. 30-Nov. 10). The veteran leads the Crunch with 16 points (9g, 7a), recording at least one point in 12 of 17 games this season.

Goaltender Max Lagace earned his first win with the Crunch Friday against the Phantoms. On the mend from an injury sustained in the season opener, the 28-year-old made 24 saves to improve to 1-2-0.

Two Crunch players earned their first career NHL recalls in the past week.

Defenseman Sean Day was recalled by the Tampa Bay Lightning Friday morning. The 23-year-old defenseman is in his second season in the organization and leads Crunch defensemen in scoring with 10 points (2g, 8a) in 15 games. Last season, he amassed a career-high 15 points (3g, 12a) in 29 Crunch games. Day was selected by the New York Rangers 81st overall at the 2016 NHL Entry Draft.

Forward Gabe Fortier was recalled by the Lightning Monday. The second-year pro is third on the team in scoring with 11 points (4g, 7a). He recorded a career-high four-game scoring streak (2g, 3a) prior to being held pointless Saturday. The Lachine, Quebec native was selected by the Lightning 59th overall at the 2018 NHL Entry Draft.

As of Tuesday morning, neither player has appeared in a game for the Lightning; 69 players have played for the Crunch before dressing for the Lightning during this affiliation, including three new players this season.

The Crunch and Amerks finish off a stretch of three head-to-head matches in an eight-day stretch. Syracuse travels to Blue Cross Arena Wednesday night before the Amerks return to Upstate Medical University Arena Saturday night. Rochester has claimed the first two games of this year’s 12-game season series. In the last five years, the Amerks have won 23 matches and the Crunch have won 22; the road team has a winning record in that span.

Saturday’s game is the Crunch’s 11th annual Stanley Steemer Tired Teddy Toss. Fans are asked to bring in new or gently used stuffed animals to toss onto the ice after the Crunch’s first goal. Stanley Steemer will refurbish the bears and donate them to the Salvation Army.

In between their two meetings with Rochester is the Crunch’s first clash with the Wilkes-Barre/Scranton Penguins Friday night. Last season, the Crunch took five of six against the Penguins, winning the final five games. The Penguins (8-8-0-2) are the league’s lowest-scoring team at 2.17 goals per game.