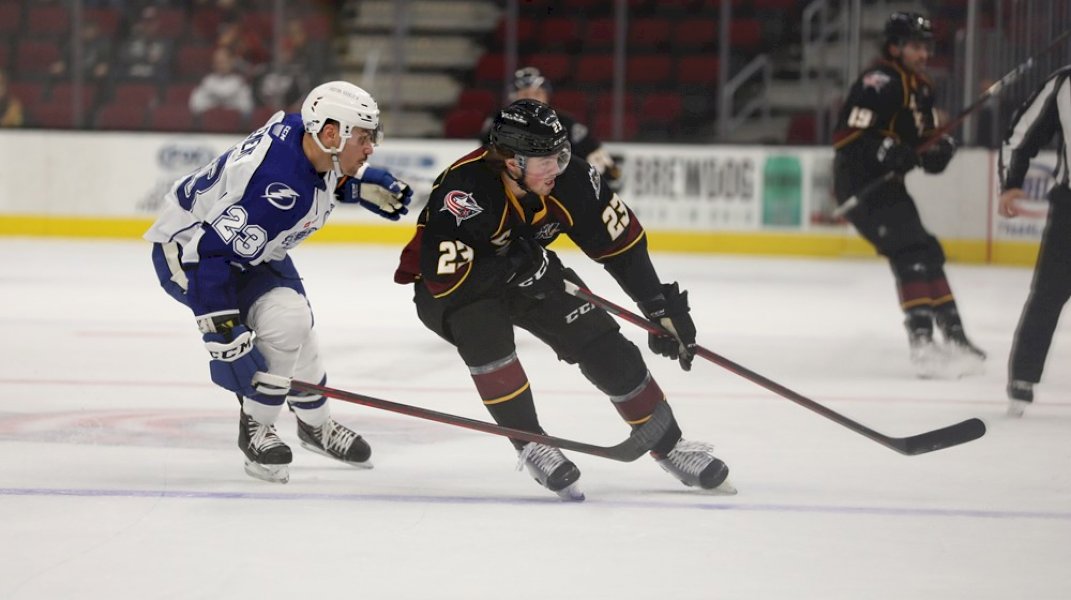 The Crunch lost two games to the Cleveland Monsters in Week 6, seeing their 12-game head-to-head point streak against the Monsters end. Syracuse’s winless streak is up to a season-long five games (0-3-1-1) and the Crunch are now 1-4-1-1 in November.

Syracuse has dropped to 5-6-2-1 this season and the Crunch rank sixth in the North Division with a 0.464 points percentage.

The opening game of last week’s two-game series between the Crunch and Monsters went to overtime Wednesday night. Shawn Element netted his first pro goal to open the scoring for the Crunch, but the Monsters tied the game a minute later in the first period and eventually won in overtime, 2-1.

Friday saw the Crunch’s 12-game head-to-head point streak (8-0-3-1) against the Monsters end in a 5-1 regulation loss at Rocket Mortgage FieldHouse. Gabe Fortier netted the lone Crunch goal in the defeat.

Syracuse returns to Upstate Medical University Arena and hopes for some home cooking with three home games on the docket in Week 7.

Forward Gabe Fortier was the only Crunch skater to record a point in both games last week. He picked up a primary assist on Shawn Element’s goal Wednesday night then notched the only Crunch marker in Friday’s loss.

The second-year pro has points in back-to-back games for the third time this season; he has not eclipsed a streak of two games in his career. The Lachine, Quebec native has eight points (3g, 5a) in 14 games this season, which is tied for fourth on the team. He produced 10 points (6g. 4a) in 30 games as a rookie last season.

Goaltender Amir Miftakhov made his fifth consecutive start Wednesday at Cleveland. He made a season-high 34 saves on 36 shots, but suffered an overtime loss in a 2-1 defeat.

Defenseman Evan Wardley collected an assist on the Crunch’s lone goal Friday night to record his first AHL point in his fourth AHL game. The 27-year-old joined the Crunch on a PTO Nov. 3 after starting the season with the ECHL’s Idaho Steelheads.

The Crunch aim to get back on track with three home games in four days in Week 7.

The appetizer for the weekly feast comes Wednesday night as the Crunch host the Belleville Senators for the first of eight head-to-head meetings. It’s the first time the Sens come to Syracuse since Dec. 20, 2019. Belleville won three of the four meetings during the 2019-20 season. Belleville occupies seventh place in the North Division with a 6-8-0-0 record this season. The Senators played just once last week and picked up a 5-2 win against Laval to finish a three-game homestand.

Following Thanksgiving, the entrée for the week is Friday when the Crunch finish their two-game season series with the Lehigh Valley Phantoms. Syracuse captured the first match, 3-2, in overtime at PPL Center Oct. 30, rallying from two one-goal deficits in the win.  The Phantoms are in eighth place in the Atlantic Division at 3-8-4-1 and they are winless in five straight games (0-2-2-1).

For dessert, the Crunch host the Rochester Americans for the first time this season Saturday night. It is the second of 12 head-to-head meetings scheduled for 2021-22; the Amerks defeated the Crunch, 5-3, at Blue Cross Arena Oct. 22 in their home opener. The Amerks enter the week following a 5-3 loss to Utica and face the Comets again Wednesday before hosting Hershey Friday. Rochester currently sits in fourth place in the North Division with an 8-6-0-0 record, including identical 4-3-0-0 marks at home and on the road.