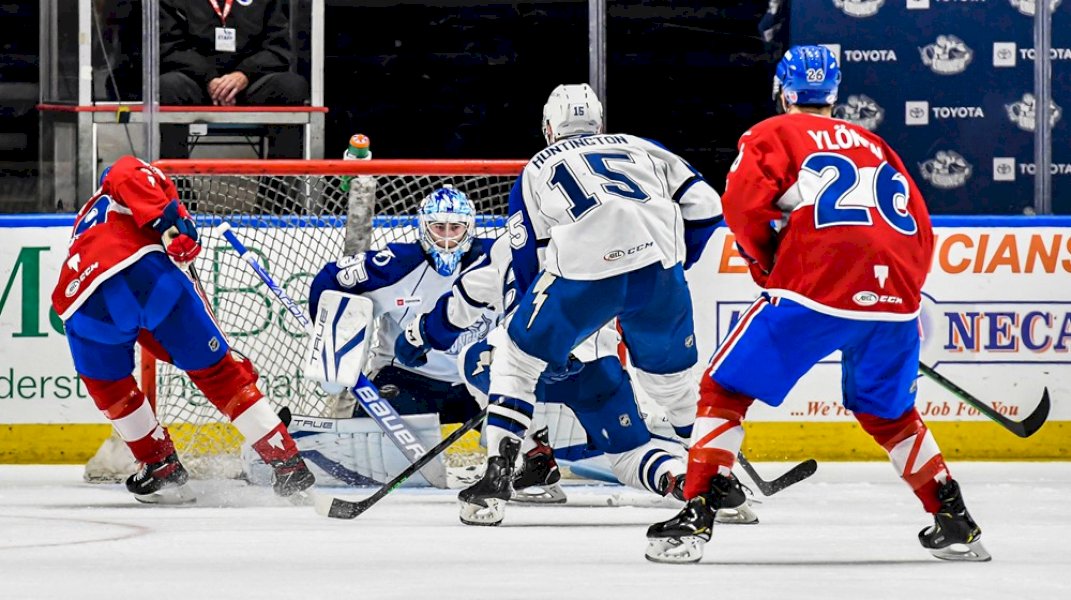 The Crunch earned one win in two games at Upstate Medical University Arena in Week 4.

In the first game of the week, the Crunch dropped a 6-3 decision to the Utica Comets, snapping the Crunch’s three-game winning streak.

The Crunch rebounded on Saturday with a 4-0 shutout victory over the Laval Rocket in their first head-to-head match since the 2019-20 season.

The Crunch hit the ice three times in Week 5, including a pair of home games against Atlantic Division foes.

Rookie goaltender Amir Miftakhov earned his first shutout in North America by making 29 saves in Saturday’s 4-0 win over the Laval Rocket. With that performance, Miftakhov became the first Russian-born Crunch goaltender to post a shutout since Andrei Vasilevskiy in a 4-0 win over Binghamton Dec. 18, 2015.

Rookie Cole Koepke found the hot hand in Week 4 with back-to-back multi-point games. He collected a pair of assists in Friday’s loss to the Comets. Saturday, he posted another helper on the game’s opening goal and then he tallied his second goal of the second to give the Crunch a 3-0 lead in the second period.

The Minnesota-Duluth product is scoring at a point-per-game pace, with seven points (2g, 5a) in his first seven games this season. After finishing his college career last season, Koepke joined the Crunch and produced three points (2g, 1a) in nine games.

The Crunch’s 4-0 shutout was the team’s first over Laval since the Rocket joined the AHL prior to the 2017-18 season.

Laval is the 32nd different AHL city to be shut out in a game by the Crunch since 1994.

Forward Tristin Langan scored his first AHL goal in his 15th AHL game Saturday against the Rocket. The 22-year-old is with the Crunch on a PTO and netted a power-play goal, which held up as the game-winning goal, against the Rocket. He added an assist later in the game for his first career multi-point performance. He has three points (1g, 2a) in six games with the Crunch this season.

Defenseman Sean Day appeared in his 100th AHL game Saturday. Now in his second season with the Crunch, Day is tied for the team lead with eight points and paces the Crunch with seven assists. The 23-year-old has 41 points (8g, 33a) in his first 100 AHL games.

The Crunch face three opponents in four days in Week 5.

The Crunch host the Bridgeport Islanders Wednesday night in the first of two head-to-head meetings. The Crunch last faced Bridgeport in 2019-20 when they took three-of-four from the Sound Tigers, including a 3-2 win Feb. 5, 2020 in their final meeting. The Islanders are 4-5-0-2 with a conference-high 11 games played. They are in seventh place in the Atlantic Division as one of two teams with a points percentage below 0.500.

The next afternoon, the Crunch travel to Utica for a 3 p.m. Veterans Day faceoff against the Comets. It’s the third of 14 meetings in the Galaxy Cup series. Utica has won the first two matches and is the lone unbeaten team in the AHL with a 7-0-0-0 record, including a 5-0-0-0 mark at the Adirondack Bank Center. The Comets lead the league with 4.29 goals per game and rank second with 1.86 goals allowed per game.

Syracuse returns to Upstate Medical University Arena Saturday night for the second of four games against the Hershey Bears. The Crunch rallied from a 2-0 deficit against the Bears Oct. 27 to win, 3-2, in overtime at Giant Center. At 5-2-2-1, the Bears are in third place in the Atlantic Division, sporting a 0.650 points percentage. They are 1-1-1 in three road games this season.