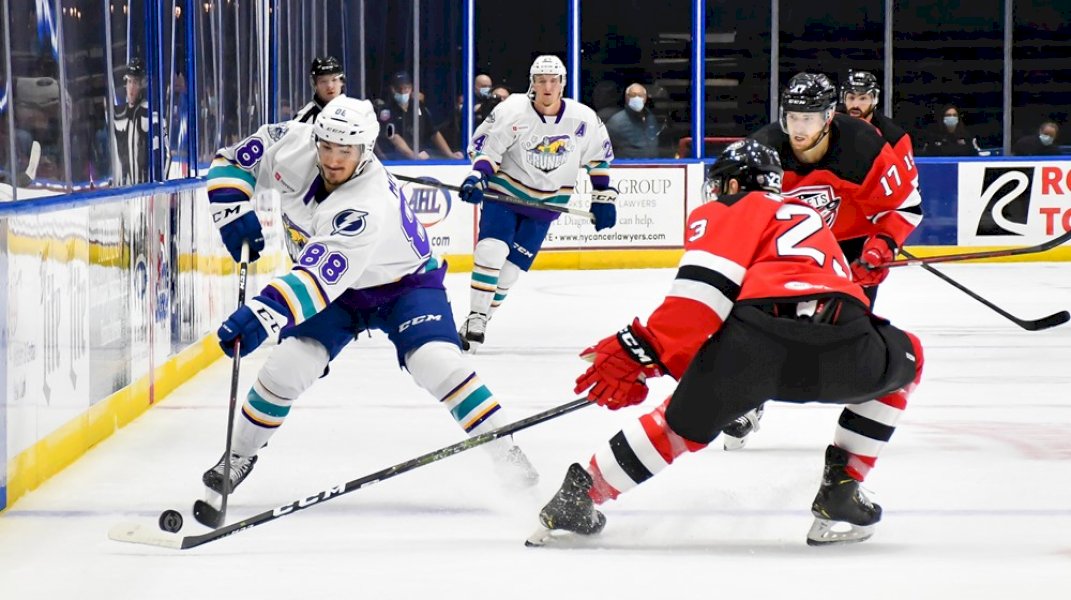 The Crunch played well, but came up empty in a pair of games in Week 2.

They started the week Friday in Rochester for the Amerks home opener and lost, 5-3, at Blue Cross Arena. The following night, the Crunch welcomed fans back to Upstate Medical University Arena for the first time in 603 days. Despite scoring first for the second straight game, however, the Crunch fell to the Utica Comets, 2-1, in the first game of the 14-game season series.

The Crunch have their first three-game week of the season coming up. They make two trips to Pennsylvania—Wednesday in Hershey and Saturday at Lehigh Valley—while facing the Cleveland Monsters at home on Friday.

Rookie Gage Goncalves scored the Crunch’s first and only goal in Saturday’s loss to the Comets. He staked the team to a 1-0 lead with an early first-period tally for his second goal of the season. The 20-year-old joins Jimmy Huntington as the only two Crunch players with more than one goal through the team’s first four games of the season.

Goncalves saw action in two games last season for the Crunch recording one assist. He finished his junior career with the Everett Silvertips, where he played for three seasons. Last season he logged 34 points (12g, 22a) in just 23 games and ended with 120 points in 151 career WHL games.

Despite taking a loss, rookie goaltender Hugo Alnefelt had a strong home debut for the Crunch. He stopped 28-of-30 shots faced against the Comets in a 2-1 defeat.

The 20-year-old Swede has appeared in all four games to begin the season; he relieved an injured Max Lagace in the season opener and has started the last three games. He is 1-2-1 with a 3.39 goals-against average and an .870 save percentage.

The Crunch hit the Upstate Medical University Arena ice Saturday night in their home opener. It was the team’s first regular season game with fans since Feb. 29, 2020, a span of 603 days.

The Crunch’s return to home ice was played in front of a sellout crowd of 4,973. It marked the third consecutive home opener (excluding 2020-21) in which the Crunch played to a sold out crowd dating to 2018-19.

Despite their two losses, the Crunch saw several milestones reaches in Week 2.

Jaydon Dureau opened the scoring for the Crunch in their 5-3 loss to the Rochester Americans. It was Dureau’s first professional goal and it came in his third pro game. Dureau, with the Crunch on an amateur try-out, is a fifth round pick by the Tampa Bay Lightning in the 2020 NHL Entry Draft.

Forward Simon Ryfors also scored his first goal of the season Friday night. It was the Swede’s first North American pro goal after he signed a two-way contract with the Tampa Bay Lightning over the summer.

In Saturday’s home opener, defenseman Jesse Lees logged his first AHL point with an assist on the Crunch’s lone goal in his AHL debut.

The Crunch match up against three different opponents in four nights in Week 3.

First up is a Wednesday tussle at Giant Center against the Hershey Bears, a team the Crunch haven’t faced since Nov. 3, 2019. It will be the 126th all-time matchup between the clubs; Syracuse has faced Hershey more than any other current AHL franchise except Rochester and Wilkes-Barre/Scranton. The Bears are off to a 3-1-0-0 start in 2021-22.

They return home Friday to host the Cleveland Monsters in the teams’ third match this month. The Crunch collected three of four points in their season-opening trip to Cleveland; the Monsters are 3-0-0-1 since their home-opening loss to the Crunch.

The Crunch dip back into Pennsylvania to visit the Lehigh Valley Phantoms Saturday in their lone trip to PPL Center. They last squared off Feb. 22, 2020, a Crunch win that earned a split of their two-game season series; both games were decided by one goal. The Phantoms enter the week as the lone winless team (0-3-1-0) in the Eastern Conference. They have two cracks at a win this week prior to facing the Crunch.

DiGirolamo Repeats as CHA Defenseman of the Week