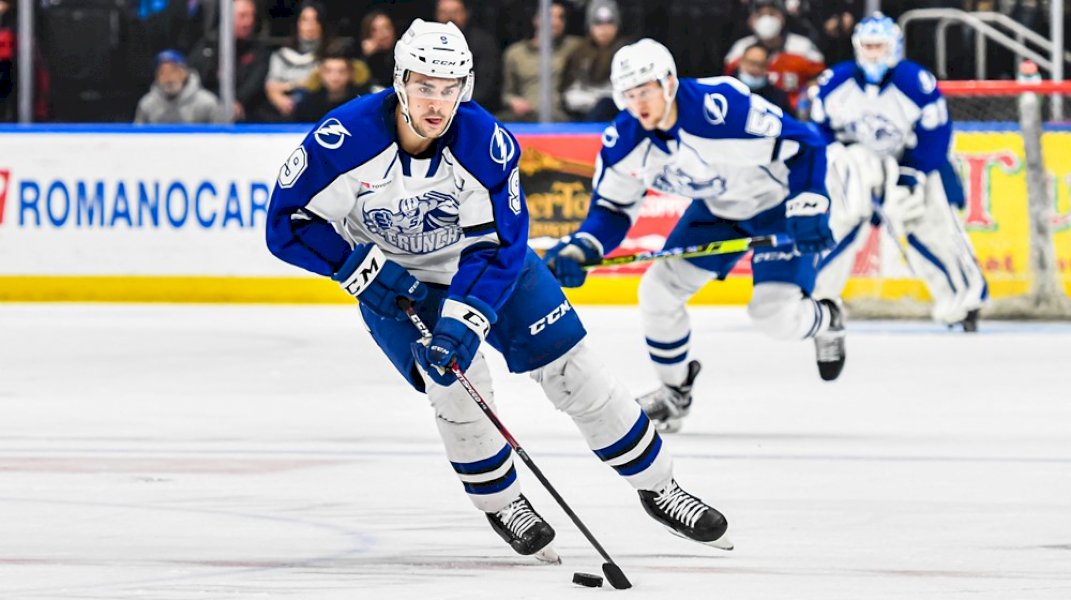 CRUNCH HAVE UP AND DOWN WEEK

The Crunch finished off January with a win and two losses, including a last-second heartbreaker in Rochester. Syracuse ended the month with a 7-5-1-0 record to jump up from seventh place in the North Division to fifth place.

Syracuse opened the week with a strong 3-1 win over the Cleveland Monsters at Upstate Medical University Arena Wednesday night. Friday in Rochester, the Amerks broke a 1-1 tie with 6.7 seconds remaining in regulation to knock off the Crunch, 2-1, at Blue Cross Arena. The final game of the week ended with Charlotte defeating the Crunch, 6-1, to give the Crunch a 5-2-0-0 record on home ice in January.

The Crunch look to continue their climb up the division standings as they open February.

Gabriel Dumont led the Crunch with three points over three games in Week 16. He notched his sixth multi-point game of the season Wednesday against the Monsters, scoring what turned into the game-winning goal with a power-play strike, plus assisting on the insurance empty-net goal. His goal was the 15th of the season and tied him for the most he’s scored in his Crunch career. His assist late in the third period was the 200th of his AHL career.

The captain leads the Crunch in scoring with 30 points (15g, 15a) in 34 games. He is one of three Crunch players who have appeared in every game this season, joining Ryan Jones and Simon Ryfors. His six multi-point performances are tied with Alex Barré-Boulet and Charles Hudon for the team lead.

The Crunch spend most of February in Canada battling Belleville and Laval. Syracuse makes three different trips north of the border to play seven games this month, starting with a two-game series this week against the Senators. They take on Laval three times in four nights next week and then cap the month with games on back-to-back days in Belleville.

These trips knock out the remainder of their scheduled matches in both Belleville and Laval; the Crunch have one other game in Canada slated for April 6 at Toronto.

BATTLE FOR THE NORTH

With the playoff race in the North Division heating up as teams hit the halfway mark of the season, the Crunch prepare for 11 intra-divisional matches in February.

Out of the 11 scheduled games within the division, the Crunch have four games—all on the road—slated against Belleville, four against Laval, two versus Rochester and one head-to-head with Utica.

The Crunch hit the road for the first of three Canadian trips this month as they face the Belleville Senators twice in three days at CAA Arena in Belleville. The teams are schedule for four matches in Belleville this month. This week marks the third and fourth games of their eight-game regular season series; the teams have split a pair in Syracuse with the Crunch winning with a late game-winning goal Jan. 17. The Senators (15-17-0-0) have only played once since that loss in Syracuse, dropping a 5-1 decision to Toronto last Friday. The Senators are one of two North Division teams with a below 0.500 record on home ice, going 6-9-0-0 in their first 15 homes games this season.

Syracuse returns home on Saturday to host the Charlotte Checkers for the second consecutive weekend. Charlotte thumped the Crunch, 6-1, this past Saturday to earn their sixth straight win in Syracuse since the 2017-18 season. The Checkers have outscored the Crunch, 32-12, over those six games, which included Syracuse home openers in 2018 and 2019. The Crunch’s last home win versus Charlotte is Nov. 11, 2017. The Checkers (21-15-2-0) are in the midst of a five-game swing through New York; they visit Rochester twice this week before taking on the Crunch.