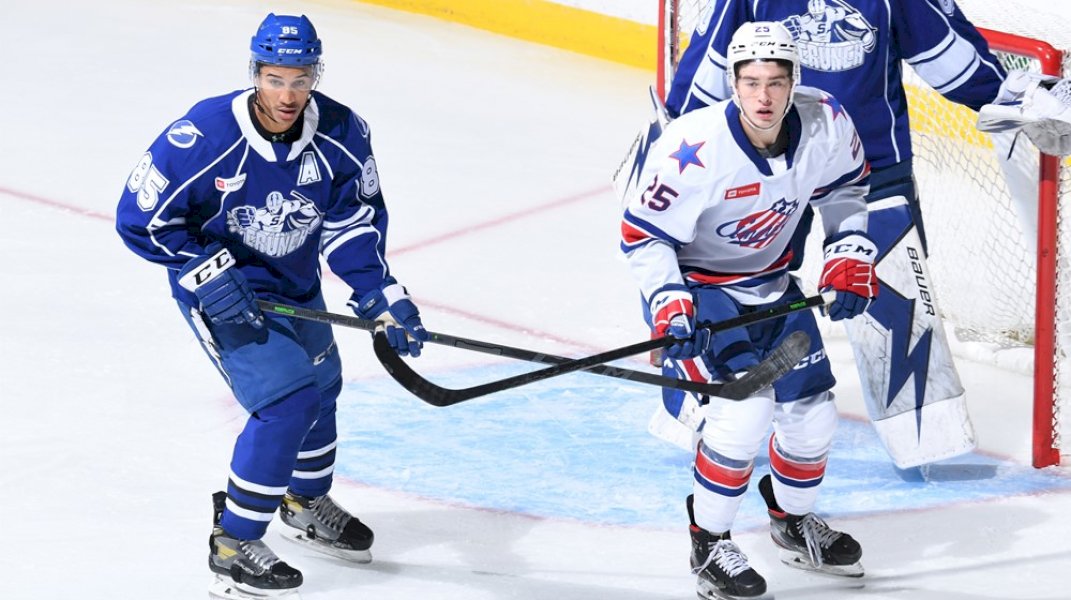 CRUNCH SET TO RETURN TO ACTION IN 2022

Following a three-week layoff due to AHL Covid-19 protocols affecting either the Crunch or their opponents, plus the holiday break, the Crunch are scheduled to play three games in four nights to open 2022.

After playing just four games (2-2-0-0) in December, the Crunch have played a league-low 21 games during the 2021 portion of their schedule. Syracuse now has 55 games to play over the remaining 116 days of the regular season.

With that, the TampaCuse pipeline grew by five players and is up to 75 total players going from Syracuse to Tampa Bay since the start of the affiliation in the 2012-13 season.

Lagace posted a 1-1-0 record in two starts while Alnefelt relieved him and made his NHL debut Dec. 30 at Florida.

Day and Raddysh also made their NHL debuts for the Lightning, skating in two games apiece. Elie dressed in one game for the Bolts.

Nine players have now been added to the TampaCuse pipeline this season, which is tied for the second-most in a single season since the affiliation began. The most in a season was the first year of the affiliation when 18 players saw action for the Crunch and the Lightning during the lockout-shortened NHL season.

Lagace, Alnefelt, Day and Elie have all returned to the Crunch in advance of the Crunch’s return to action this week.

The Syracuse Crunch have announced five rescheduled games and one time change for the 2021-22 season.

AHL Game #400 (Providence at Syracuse), originally scheduled for Dec. 22, has been rescheduled for Wednesday, April 27 at 7 p.m.

Additionally, the April 6 game in Toronto originally scheduled for 11 a.m. will now start at 7 p.m.

The American Hockey League Board of Governors has approved the extension of the 2021-22 calendar by six days. The regular season will now conclude on April 30, 2022.

“Nearly all of our 31 teams have seen their schedules impacted by COVID-related postponements,” said AHL President and Chief Executive Officer Scott Howson. “Adding time to the end of the regular season will give our clubs more opportunities to reschedule these games.”

The 2022 Calder Cup Playoffs are expected to finish before June 30.

The Crunch face the Rochester Americans twice and the Hershey Bears once in their first game action since Dec. 15.

Syracuse travels to Rochester Wednesday before hosting the Amerks Saturday night. The teams have played just twice so far this season; the Amerks defeated the Crunch 5-3 Oct. 22 and 4-2 Nov. 27. Rochester enters the week in second place in the North Division at 17-9-0-0. While the Crunch have not played a game since Dec. 15, the Amerks have played five games (4-1-0-0) and most recently won at Hartford Jan. 2.

Syracuse hosts Hershey for the final time this season Friday night. It’s the third of four meetings between the teams this season; both previous matches went past regulation with the Crunch winning, 3-2, in overtime in Hershey before the Bears responded with a 5-4 shootout win in Syracuse.