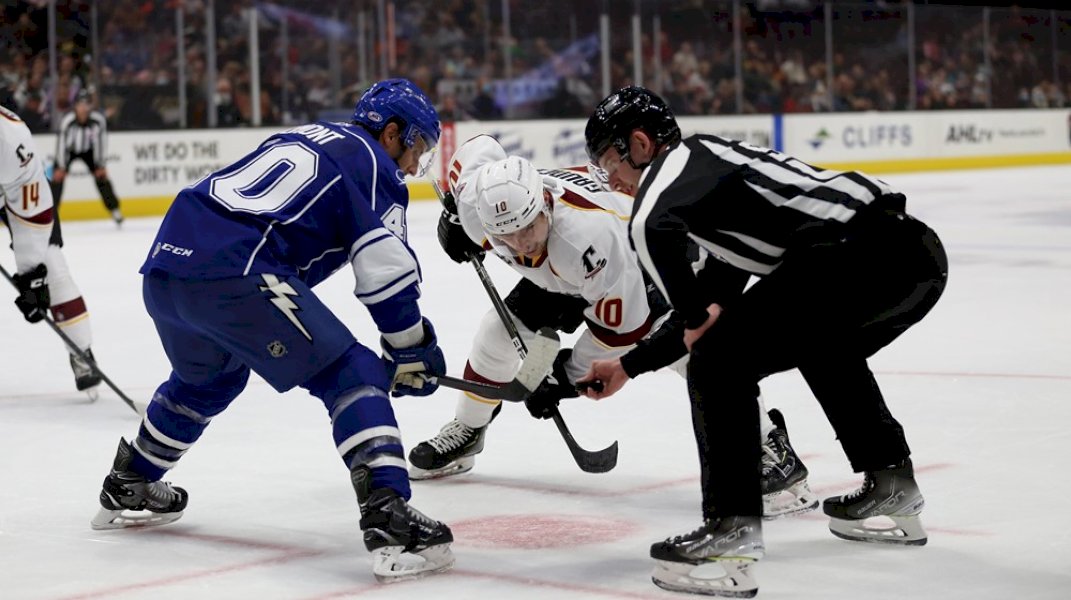 The Crunch began their 28th regular season in franchise history by splitting a pair of games against the Cleveland Monsters to collect three of four possible points on the road trip.

The Crunch rallied back from a 2-0 deficit in the season opener to win, 6-4, Friday night on the strength of six different goal scorers. In the rematch on Saturday, Syracuse faced a 3-0 deficit before Jimmy Huntington logged a hat trick to tie the game. Eventually Cleveland prevailed with a 5-4 overtime win.

The Crunch prep for another two-game week, including their home opener Saturday night.

Jimmy Huntington paces the AHL with four goals heading into Week 2. He notched the 69th hat trick in franchise history in Saturday’s overtime loss to Cleveland. He also ranks second in the AHL in scoring, only one point off the league lead after one weekend.

Huntington is now one goal shy of his career high, which he set last season with five goals in 28 games.

Gabriel Dumont had a strong first two games in his return to the Crunch after spending two years in the Wild organization. The veteran recorded a multi-point game in the season opener, with a goal and an assist. He followed that up with an assist on Jimmy Huntington’s hat trick goal Saturday.

Crunch forward Jimmy Huntington was named AHL Player of the Week after scoring four goal in two games. He recorded a natural hat trick, the AHL’s first hat trick of the season, to rally the Crunch back from a 3-0 deficit Saturday night.

It’s the first time Huntington has been named AHL Player of the Week in his career. He becomes the third Crunch player to win the award in the last six weeks it has been awarded, dating to the week ending April 18, 2021; he joins Taylor Raddysh and Boris Katchouk.

So far in 2021-22, two Crunch alumni have made their NHL debut with the Tampa Bay Lightning, bringing the total to 68 players who have come through Syracuse on their way to the Lightning during this affiliation.

Taylor Raddysh made his NHL debut in the Lightning’s season opener and has played two games. In three seasons with the Crunch, Raddysh totaled 110 points (49g, 61a) in 159 games.

Boris Katchouk also spent three seasons with the Crunch before making his NHL debut with the Bolts Oct. 16. He produced 89 points (36g, 53a) in 164 Crunch games, including a team-leading 34 points in 29 games last season.

Both players were named to the 2020-21 North Division All-Star Team.

The Crunch face another two games in Week 2, squaring off against Rochester and Utica-two of the three opponents they played in the truncated 2020-21 season.

They travel to Rochester Friday night for the Amerks’ home opener. It’s the seventh time the Crunch have served as Rochester’s home opening opponent, including three times in the last five years. The Amerks are 5-1-0-0 all-time in home openers against the Crunch; Syracuse’s lone win in the series was in 2008. Rochester began it’s season with a 6-2 loss on the road against the Utica Comets.

The Crunch face those Comets on Saturday in the franchise’s 28th home opener. It’s the second straight season the Crunch’s first home game will be contested against Utica. Prior to the game, the Crunch will hold a ceremony to honor local front-line and essential workers. The Stanley Cup® will also be in the building as the Crunch celebrate their parent club Tampa Bay Lightning winning back-to-back Stanley Cups.

On the ice, it will be the first of 14 regular season matches in the Galaxy Cup series. The Comets won their season opener against Rochester to debut their new affiliation with the New Jersey Devils.

Come on out to Laker Women’s Ice Hockey this Season … It’s Free!