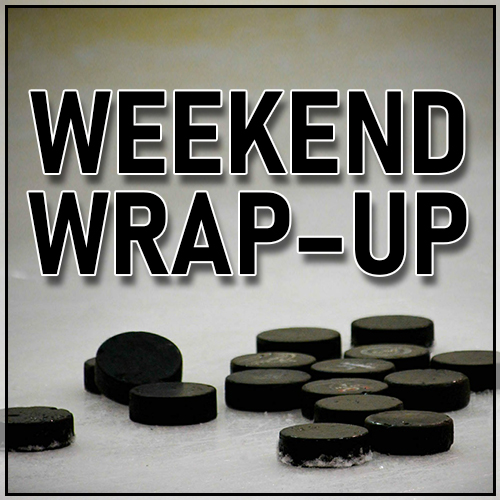 Scott Wedgewood made 20 saves for Rochester as the Americans downed the Comets 4-0. Rochester was led by 3 assists from Lawrence Pilut.

Toronto received goals from Rasmus Sandin and Chris Mueller to take a 2-1 lead into the first intermission and never looked back. The lone Syracuse goal was scored by Taylor Raddysh with 1:45 left in the first.

Charlotte came out of the gate flying and scored the two first goals of the period before Raddysh tallied a power-play marker 12:40 in to cut the Checkers lead to 2-1.

Eric Cernak scored a power-play goal of his own just 29 seconds into the second to tie the game at two. Julien Gauthier and Aleksi Saarela both scored for the Checkers regaining a two-goal advantage heading into the final frame.

Martin Necas increased that lead to three goals less than a minute into the third. Ross Colton scored for Syracuse three minutes later to cut the deficit back to two. Charlotte’s Clark Bishop had an empty net goal to seal the win for the Checkers.

The Crunch host North Division foe Belleville at 7:00pm Friday and Saturday night at the War Memorial. Utica heads to Laval to take on the Rocket who currently sit one point behind them in the standings. Puck drop is scheduled for 7:30pm Friday and 3:00pm Saturday. The Rocket will be in Utica on Wednesday night as the two teams play each other for the third time in six days.

Colgate was on the road continuing non conference play over the weekend against a very good Miami team. The first period was back and forth with both teams registering over 10 shots on goal, but Miami was the only team that found the back of the net.

Phil Knies put the RedHawks up 2-0 in the second before Colgate sophomore Josh McKechney scored his first goal of the season while on the power-play. Miami added two more en route to the 4-1 victory.

Andrew Farrier stopped 35 shots in his collegiate debut for the Raiders. Colgate dominated much of the second period, but two late goals by Miami deflated the Raiders sails heading into the third.

Colgate returns to Class of 1965 Arena in Hamilton, NY this weekend. They open ECAC play Friday night against Brown before welcoming Yale for another conference game Saturday evening.

Nine different players had point for Colgate as they opened their ECAC schedule against Dartmouth. Delani MacKay and Malia Schneider scored power-play goals in the first and second to give Colgate a 2-0 lead. Just over 3 minutes later Rosalie Demers extended the lead to 3-0. Coralie Larose, Olivia Zafuto (PP) and Jessie Eldridge added goals in the third to end the game 6-0 in favor of the Raiders. Liz Auby was only tasked with making 14 saves to record her sixth career shutout.

Colgate dominated this game from the drop of the first puck, but couldn’t find a way to beat Crimson goaltender Lindsay Reed. After two periods the Raiders held an astounding 38-18 shot advantage, but the score remained tied 0-0.

The Raiders were finally able to get on the board on a bit of a broken play. A Schneider shot bounced off the leg of Nemo Neubauerova and right back to Schneider. Schneider passed the puck to a wide open Eldridge who scored her fifth goal of the year giving the Raiders a 1-0 win.

While the men are hosting Brown and Yale, the women will travel to Rhode Island to face Brown at 6:00pm Friday. From there they will make their way to Connecticut for a 3:00pm Saturday face-off against Yale.

The #6 nationally ranked Utica College men’s team hosted #3 Adrian College over the weekend. Both games were a great test after facing a fairly easy opponent last weekend in Endicott College.

Tyler Dill scored his first collegiate goal midway through the second period to give the Pioneers a 1-0 lead. Gianluca Baggetta stood tall in net through the first two periods not allowing anything to get past him.

However, the Bulldogs finally broke through 3:25 into the third to tie the game at one goal apiece. Adrian found the back of the net again seven minutes later to take a 2-1 lead halfway through the final period. Baggetta was injured on the play and his night came to an abrupt end after making 36 saves. He was replaced in goal by freshman Sean Dickson who stopped all five shots he faced. Adrian added an empty net insurance marker to seal the victory.

Adrian’s special teams was the difference in this game. They scored two power-play goals and a short handed goal to take a 3-0 lead with 17 minutes to play in the second. However, the Pioneers would not go down without a fight.

Gregg Burmaster got UC on the board with 4:55 to play in the second with assists from Brett Everson and Conor Landrigan. While on the power-play :08 into the third Landrigan got Utica back within one. Despite outshooting Adrian 30-21 in the final 40 minutes, the Pioneers couldn’t find the equalizing goal. Dickson stopped 32 shots in his first collegiate start in the loss.

Utica is back on the ice Tuesday evening as they host Manhattanville in their UCHC season opener. Tuesday night is Express Employment Feed our Vets night. Please bring canned foods and non-perishable items to donate to the Feed Our Vets program.

Rebecca Brown and Lexi Stanisewski scored a minute and a half apart to give the Pioneers a 2-0 lead in the first period. Becker would score a power-play goal later in the first to cut the lead to one. Brown scored her second of the night followed by a Katrina Cornick power-play goal two minutes later that put the Pioneers up 4-1. Becker scored a goal late in the third, but UC took this one 4-2.

Utica will travel to Wilkes College in Pennsylvania to open UCHC play this weekend. Games are scheduled for 7:15pm Saturday and 2:00pm Sunday.

Mathieu Gervais scored two goals and Dominik Bogdziul had two assists, but a late Islanders goal with only 37 seconds left tied the game at three and forced overtime. Halfway through the extra period the Islanders snuck one past Stars goaltender David Otter for the 4-3 victory. Otter finished with 20 saves.

Nick Wiencek stopped 24 and Zach Sprys-Tellner scored his first of the season in the loss.

With 5:40 to play in the game, PAL was called for tripping. It was only the second penalty called in the entire game and the Stars made them pay. Dylan Rallis found the back of the net only 23 seconds into the power-play to end the Stars skid and end the weekend on a high note.

The Stars NCDC team will host the Islanders Hockey Club in a rematch this Saturday (2:30pm) and Sunday (10:30am) at the Adirondack Bank Center in Utica.

Yaroslav Tatarenko and Tyson Rohrer scored for the Stars while Aleksandr Solovev stopped 34 shots to lead Syracuse to the 2-1 victory in a penalty filled game.

A big game from goaltender Tripp Clarke (39 saves) and a goal and two assists from both Dalton Blundell and Morgan Clarke-Pizzo led the Stars to another victory over North East division opponent Niagara Falls. The win was the sixth in a row for Syracuse.

The Thunder struck first 3:32 into the game, but Austin Buck scored on a slap-shot from the blue line with 5:20 left in the first to knot the game at 1 heading into intermission.

The Thunder scored two power-play goals less than a minute apart to take a 3-1 lead to open the second period. Three minutes later Ole Henrik Arnesen scored a power-play goal of his own to pull the Stars within one. Niagara Falls added one more in the final minute of the period.

Down 4-2 heading into the final period Syracuse came out flying and avoided the penalty box for the first time all game. Clarke-Pizzo and Tyler Knicley scored in the first ten minutes to tie the game 4-4. Rohrer scored the go ahead goal on an innocent looking shot with 5:19 to go in the game. Blundell added an empty netter to seal the victory for the Stars.

The Premier team is on the road this weekend when they travel to New Hampshire to take on the 10-1-1 Northern Cyclones.

The Whitesboro Jr. Warriors 18U Wrap team traveled to Niagara Falls over the weekend to participate in the Gene Harrington Niagara Showdown. They advanced to the championship game against a strong Cheektowaga team that ended in a 1-1 tie after regulation. The game went to overtime to determine a winner, five overtimes actually. After nearly 8 periods Whitesboro finally scored in the 5th OT to secure the 2-1 win and the championship trophy.