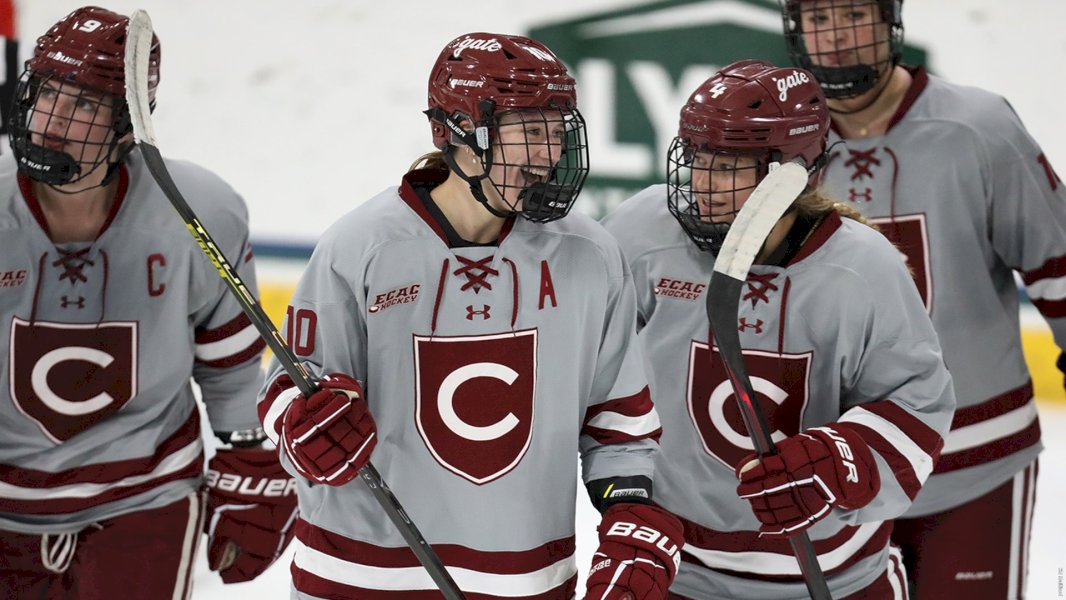 ERIE, PA. – The Raiders took to the ice Saturday afternoon in a defensive showdown against the Lakers of Mercyhurst University. Colgate completed the weekend sweep by a score of 2-0.

Kayle Osborne secured her second shutout of the season, stopping all 18 of the Lakers shots. Danielle Serdachny netted the game winner early in the third off passes from Kaitlyn O’Donohoe and Kristýna Kaltounková.

Kaltounková registered two points, scoring an empty net goal in the final seconds of the third and securing an apple on Serdachny’s game winner.

“Mercyhurst came out with more fight tonight, they blocked a bunch of shots and their goalie stood tall. Our group was up for the challenge and there was a lot to like. The easy thing to do would’ve been for our team to let frustration seep in, but we didn’t.” Said Head Coach Greg Fargo

Four minutes into the second, Dara Greig drew the first penalty of the game, forcing the Lakers to go on the penalty kill. Colgate’s power play unit controlled the pace of play but couldn’t find the back of the net.

Colgate controlled a majority of puck possession throughout the second period but struggle to get one past the keeper.

The Lakers found themselves in penalty trouble throughout the period, making three trips to the sin bin.

The Raiders outshot the Lakers 18-7 in the second period.

The third period started out hot for the Raiders, as penalty trouble caught up to the Lakers. Serdachny ripped one to the back of the net off a pass from Kaltounková and O’Donohoe. The Raiders led 1-0 with 17:29 left to play in the third.

Colgate found themselves short handed early in the third, as Allyson Simpson and Tanner Gates both made trips to the sin bin. The Raiders battled on the penalty killing off a 5-3 power play in favor of the Lakers.

Simpson made her way to the box late in the third, as she was addressed a five minute major for cross-checking. Sydney Bard and Sammy Smigliani came up big on the kill, using their sticks and bodies to deny any scoring opportunities for the Lakers.

Kaltounková secured the last second goal to secure the Raiders weekend sweep over the Lakers.

“We played the third period with great focus and energy and  took advantage of the 5 on 3 power play. We also had to kill a 5 on 3 and a five minute major to close out the game.

“There were moments of adversity and I’m pleased with how we responded to those instances collectively as a team.

“We get to go back on the road next weekend in another important series against a team we haven’t seen in a few seasons.”

The Raiders hit the road again next weekend for a two-game series against No. 11 Penn State. The Nittany Lions come into the matchup 2-2 after defeating ECACH opponents St. Lawrence 4-2 on Saturday, Oct. 1.