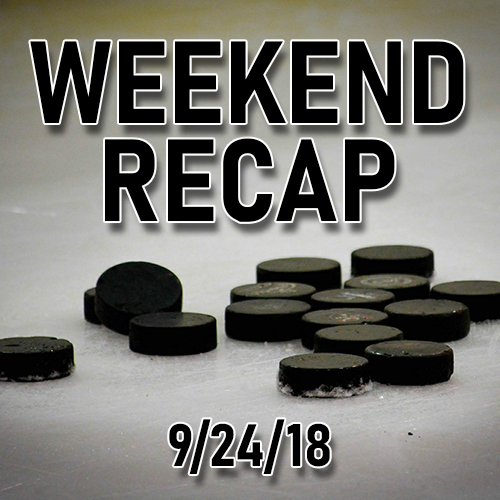 Seniors Olivia Zafuto and Shae Labbe combined for 3 goals and an assist en route to a 4-4 tie against the Vanke Rays at Class of 1965 Arena yesterday afternoon.

The Rays play in the Canadian Women’s Hockey League and are based out of Shenzen, China. Some notable players from their roster include Noora Raty who has played in multiple international tournaments for Team Finland, including 4 Olympic games. Another Olympian and International Hockey standout Kelli Stack also plays for the Rays. Stack has won 6 IIHF medals and 2 Olympic silver medals playing for the United States of America.

Both the NCDC and Premier teams spent a long weekend in Massachusetts playing in the Junior Bruins Shootout. The NCDC returned to Utica after going 1-2-0 on the weekend. The Premier team didn’t do much better and finished the weekend 1-2-1.

A hat-trick from Matias Arppe and a goal and two assists from Everett Wardle helped lead the Stars past the Jr. Monarchs in their first game of the Junior Bruins Shootout Showcase. The first period was back and forth with the teams trading goals until Mitchell Shaheen scored his second of the period to put the Monarchs up 3-2 near the end of the period.

The Monarchs went up 4-2 half way through the second, but Dominik Bogdziul got the Stars back within 1 with about 4 minutes remaining. Patrik Peltola increased the Monarchs lead back to two 7 minutes into the third period. A couple minutes later Arppe would score his second goal of the night with assists from Bogdziul and Wardle to get the Stars within one. Wardle would add another assist on Arppe’s hat-trick, and game tying, goal with 12:34 left in the period.

The teams would remain deadlocked through overtime forcing the game into a shootout. Doug Connor from the Monarchs and David Otter from the Stars stood on their heads forcing the shootout to extra rounds. Wardle who already had a goal and assist under his belt ended the game in the seventh round.

The Stars got on the board first 4:30 into the game on a power play goal by Donald Borgula. The Bruins would score the following two goals before Wardle and Arppe would connect for the tying goal with 2:30 left in the opening period. Syracuse held a 3-2 lead for much of the second period after Mathieu Gervais netted his third goal of the season only 27 seconds into the period. However, the teams would end to intermission tied once again after a Matt Allen goal for the Bruins.

The first half of the final period saw both teams trading scoring chances, but the final 10 minutes would be a different story. The Bruins controlled the second half of the period and scored three goals en route to a 6-3 final.

Matias Arppe continued his dominant weekend scoring the first goal of the game to put the Stars up 1-0. The lead wouldn’t last long though. Mark Amatetti tied it up just 3 minutes later. The second period was all Rockets as they scored in the beginning and end of the second period to go ahead 3-1.

Not to be outdone by Arppe, Wardle added another goal (PP) to get the Stars within one goal of the Rockets. It didn’t last long because the Rockets buried two more goals within the next 4 minutes to go ahead 5-2. Gregory McGuingle scored his first of the season less than 20 seconds later to get one goal back, but it wouldn’t be enough. The Rockets added one more late and dropped the Stars by a score of 6-3

Tyler Knicley recorded a goal and an assist while Aleksandr Solovev stopped 30 of 31 shots en route to the Stars first victory of the season.

Hunter Litman and Dalton Blundell both scored their first goals of the season for the Stars. Dylan Giacin assisted on both goals, but it wouldn’t be enough to earn their second win in a row. The Stars were up 2-1 late in the game when Jeff Gross scored for the Skipjacks with only 30 seconds left on the clock. Henry McKinney scored the game winner half way through the extra period.

The Nighthawks had only lost one game, in overtime, heading into their matchup with Syracuse. The teams played a back and forth game deadlocked at zero through the first two periods. Unfortunately, the third was 100% dominated by the Nighthawks. Tucker Twardosky and Denis Kuzminov scored 22 seconds apart 7 minutes into the final period to put their team up 2-0. Three minutes later Kuzminov would add his second of the night and Austin Marini would score 19 seconds later to put the game out of reach for Syracuse. James Bone added a powerplay goal with just over 30 seconds left to seal the 5-0 win for the Nighthawks.

Just like Saturday morning, Tyler Knicley got the scoring started early putting the Stars up 1-0 only 4:28 into the game. The second period was all special teams. The Kings struck first on the powerplay tying the game at 1 while a boarding penalty to Dalton Blundell was seconds away from expiring.

The Stars picked up a 3 minute power play late in the period after coincidental penalties were handed out. Minutes later Danny Totten was given a major plus game misconduct for boarding. The Stars took advantage and Luke Olivo scored to put his team up by one. The Kings were able to get one back late in the period on a shorthanded tally from Tommy Giandomenico.

The Kings popped in two more in the third to take a 5-3 lead. Olivo potted his second of the game with 10 minutes remaining, but the Stars didn’t manage to get another past Kings goaltender Cal Wilcox.