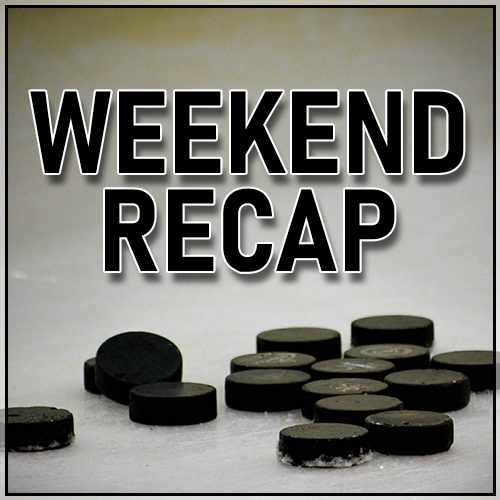 Both the Utica Comets and Syracuse Crunch opened their 2018-19 campaigns over the weekend.

Reid Boucher scored a minute into the game giving the Comets a 1-0 lead that lasted throughout the remainder of the period. Ex-Comet Jordan Subban began the Toronto onslaught 50 seconds into the second period when he tied the game 1-1. The Marlies scored the next three goals until Zack MacEwen recorded a power-play tally late in the period.

.@zmacewen11 shows some patience and puts the Comets within two heading into the final period.#TORvsUTI pic.twitter.com/AewAKs2gIY

Boucher scored his second of the game to open up the third period, but the Marlies buried three more, including two shorthanded goals 32 seconds apart, to seal the 7-3 victory.

Richard Bachman stopped 31 shots and Boucher scored a power-play goal to lead the Comets to a 3-1 victory over the Belleville Senators Saturday night.

The Comets are home Friday night at 7:00pm against the Charlotte Checkers before they head to Toronto for a pair of game Saturday and Sunday.

A first-period Carter Verhaeghe goal was sandwiched by two Bears goals leaving the Crunch down 2-1 heading into the first intermission. Taylor Raddysh tied the game up 14 minutes into the second period and a power-play goal by Alex Barre-Boulet scored 5:26 into the third stood up as the game winner. It was the first professional goals Raddysh and Barre-Boulet have scored.

The Crunch are back on the ice Wednesday in Rochester against the Americans before returning for their home opener on Saturday against the Charlotte Checkers.

The Colgate Women’s team travelled to Columbus for a two-game set against the Ohio State Buckeyes over the weekend. ECAC Player of the Week Shae Labbe struck first giving the Red Raiders 1-0 lead a little more than halfway through the first period. The Buckeyes answered only a minute and half later, but the tie wouldn’t last long. Two minutes later Bailey Larson scored on a semi-breakaway to put the Red Raiders ahead 2-1 heading into the intermission.

The first half of the second period were dominated by Ohio State who took a 3-2 lead in the first 7 minutes of the middle stanza. The lead wouldn’t last long as Colgate’s Jessie Eldridge scored a beautiful goal to tie the game up at three goals apiece.

Lauren Boyle from Ohio State responded two minutes later to give her team a 4-3 lead heading into the third period. Colgate peppered Ohio State goaltender Amanda Zeglen with 15 shots in the third period, but could not sneak one past her to tie the game up.

Colgate found themselves down 2-0 at the end of the first period, but came out ready to play in the second. Nemo Neubauerova scored only 36 seconds into the period to cut the deficit to one. Later, on the power-play, freshman Delani MacKay tipped a Malia Schneider point shot that found its way to the back of the net to tie the game at two. Labbe added her second goal of the weekend to put the Raiders up 3-2 heading into the third period.

Coralie Larose: not a fan of water bottles. 4-2 Raiders with 2:10 left in the third.#GoGate #WePlayFree pic.twitter.com/9Qv1j1NUvt

Coralie Larose and who else but Labbe added insurance markers in the last two minutes of the period. Junior goalie Liz Auby made 17 of her 38 saves (a career high) in the third period. She was named ECAC goalie of the week earlier today thanks to her stellar play.

The Women’s team will be back on the road this weekend for a pair games against Northeastern University Friday and Saturday.

The men’s team got on the ice yesterday afternoon and took on the Guelph Gryphons at Class of 1965 Arena. Colgate got on the board just 51 seconds into the game and never looked back. They headed into the first intermission with a 3-0 lead thanks to tallies by Jeff Stewart, Jacob Panetta and Trevor Cosgrove. The Gryphons scored the only goal of the second on a power play. Colgate followed up in the third with a power play goal of their own increasing the lead back to three goals. Guelph found the back of the net again halfway through the third cutting Colgate’s lead to 4-2, but that’s as close as they would get. Adam Dauda capped off his 3 point night with a goal 3 minutes later giving Colgate the 5-2 win.

The men officially start their season at home this weekend with a pair of games against the Wildcats of New Hampshire. Puck drop is scheduled for 7:00pm Friday and 4:00pm Saturday.

The Stars NCDC team participated in the Jersey Hitmen Classic over the weekend and dropped all three games.

The Stars received goals from Buster Larson and Griffen Sanom as they fell 4-2 to the Boston Bandits on Thursday night. Nick Wiencek stopped 26 in the loss, including a penalty shot late in the second period.

Syracuse again relied on their big guns to put the pucks in the net in game 2 of the weekend. After falling down 1-0 only 32 seconds into the game, Larson scored to tie the game back at 1 7 minutes later. South Shore scored the only goal in the second giving them a 2-1 lead. Finally, on their 4th consecutive power play opportunity the Stars were able to tie the game up. Sanom and Dominik Bogdziul were able to connect with Mathieu Gervais for the tying goal.

Both teams recorded 7 shots in the overtime period, but the goaltenders stood tall and it was on to a shootout.

Larson, Bogdziul and Sanom all scored in the first 5 rounds of the shootout, but so did three Kings players. The game was finally ended after Sebastian Janda snuck one past Stars goaltender Cole Hudson in the 8th round. Donald Borgula had a chance to score to extend the shootout, but he didn’t convert.

David Otter stopped an astounding 57 shots in the 2-1 loss to the Hitmen. The only Stars goal was scored by Gervais halfway through the second period which had tied the game at 1. The Hitmen scored what turned out to be the game winning goal with around 25 seconds left in the middle frame.

The NCDC team is home this weekend to face the Hitmen once again. They face-off at 5:30pm Saturday and 2:30pm Sunday at the Adirondack Bank Center.