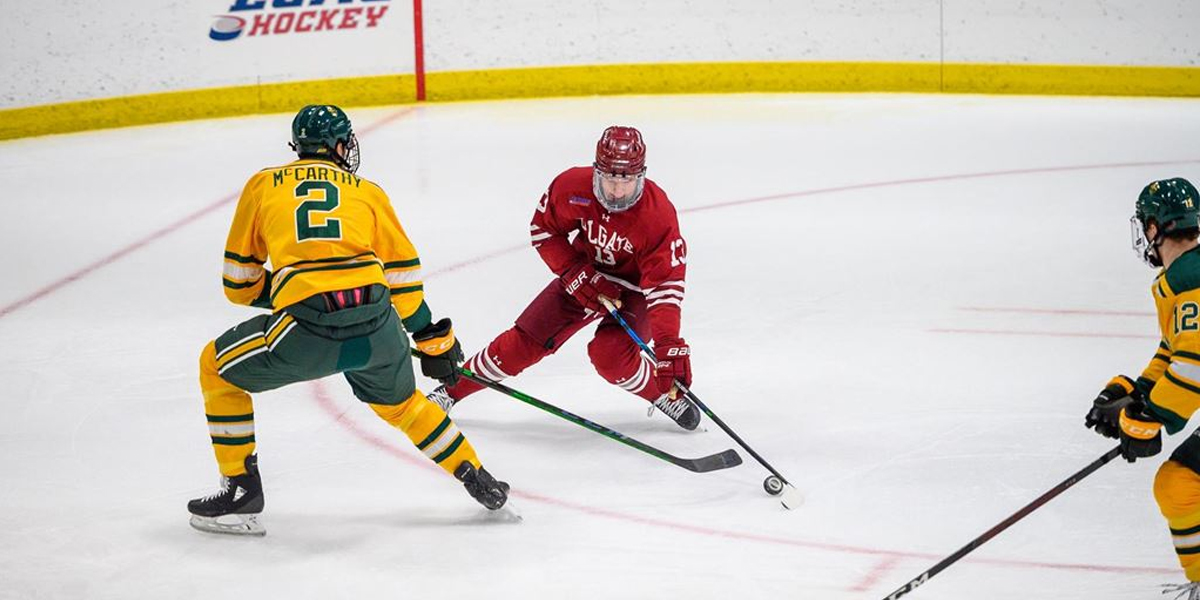 Two goals from Matt Verboon helped the Raiders upset #8 Clarkson 5-4 in overtime Wednesday night. It was only the second game of the season for Colgate. Their first game was a 2-1 loss to these same Golden Knights back on November 22nd.

Clarkson jumped out to a quick 1-0 lead scoring a power-play goal less than two minutes into the game. Just over 1:15 later Ethan Manderville scored his first goal of the season, and his career, to even the score. Tyler Jeanson and Nick Anderson picked up assists. It was also the first career point for Anderson who was playing in his first collegiate game.

Clarkson regained a one goal advantage midway through the period following a shot through traffic that beat Andrew Farrier. The Young brothers Alex and Colton teamed up to tie the game at two goals apiece with just over two minutes left in the period.

A minute later at 18:54, Griffin Lunn scored a goal assisted by Paul McAvoy to give the Raiders their first lead of the night. That lead didn’t stand for long. Clarkson popped one in at 19:42 of the period tying the score at three all after a wild twenty minutes of play.

Colgate found themselves with a 4-on-3 advantage following three penalties in a span of 1:20 early in the second period. Matt Verboon capitalized on the opportunity giving Colgate a 4-3 lead.

Clarkson answered two minutes later to once again tie the game and chase Farrier from the net. He finished with 9 saves.

The third period began with Colgate earning a 50 second 5-on-3 advantage in which it looked like Colton Young scored, but the officials waved the goal off immediately. The Raiders continued to up the offensive pressure throughout the remainder of the third period. Relief goaltender Carter Gylander made a couple of huge saves in the final minutes to force overtime. He would finish the game with 12 saves.

With 1:40 remaining in overtime Verboon picked up an Alex Young rebound and backhanded it in for his second goal of the night. The assist was Young’s third of the night.

🚨 Booner on the rebound!

Sophomore Matt Verboon scores his second of the night to lift the Raiders to a 5-4 overtime win at No. 8/9 Clarkson. pic.twitter.com/LJzq6xIDhT

Colgate travels to Worcester, Massachusetts on Sunday, December 27 to take the College of Holy Cross at 4:00pm.