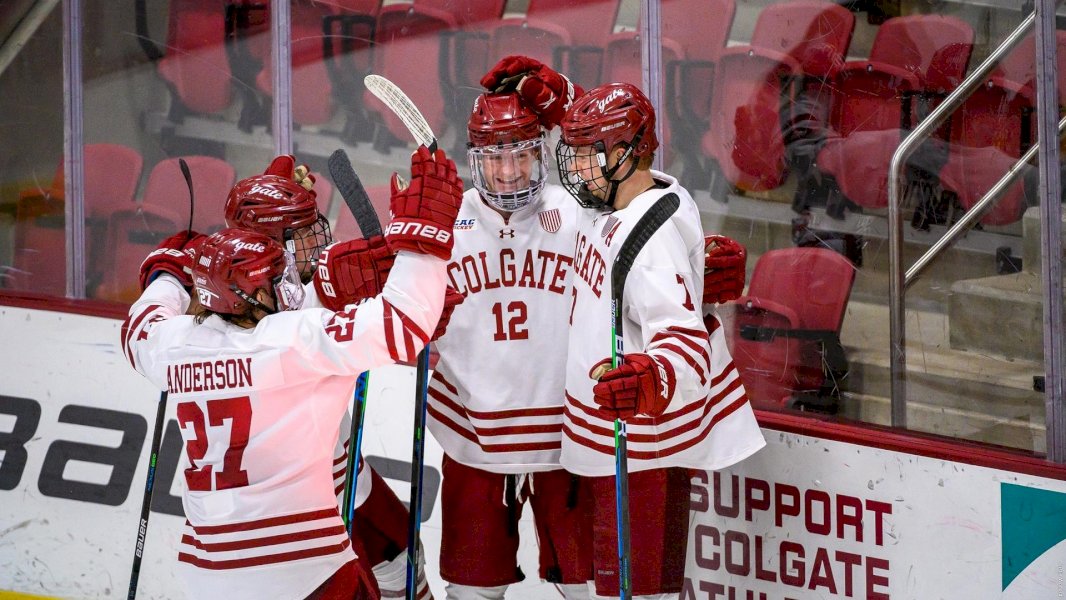 That’s because the Raiders will be without Head Coach Don Vaughan, who will be sidelined due to COVID protocols. It will be the first time he’s missed a game in his career at Colgate, which began in 1992.

As a result, a remarkable streak of 1,037 consecutive games behind the bench will be snapped.

Vaughan hopes to rejoin the team Monday after his period of isolation is completed. But even a temporary pause has not been easy for a coach whose life has become intertwined with those of his players.

“It has been a difficult week being away from the team,” Vaughan said. “We are together for long periods of time and much of that time is not directly related to playing hockey. So when that is taken away, it’s tough.

“We are so used to the routine and being together with practice and travel and meals etc., that at least for me it’s like something has been taken away, even if only temporarily. I have been coaching college hockey since 1985 and nothing like this has ever happened to me.”

Vaughan said he will be watching his team against the Wildcats, but he won’t be coaching remotely.

Associate Head Coach Dana Borges will be running the show, and he’ll be doing it with fewer people behind the bench. Assistant Coach Andy Boschetto will also miss both games against Northern Michigan.

“Dana is more than capable and he is the one who has been leading the team every day over the past week, so he has his finger on the pulse,” Vaughan said of Borges.

In these unique situations where a coach is unable to be present for in-person coaching activities, the NCAA allows for a temporary replacement to provide additional assistance to the team and coaches. As such, Colgate’s Director of Hockey Operations Liam Conway will be able to assist Borges on the bench for game-day coaching duties during the weekend, while a mix of student-athletes will assist with in-game video and team communications.

Ron Fogarty ’95 was a sophomore and member of the men’s hockey team when Vaughan took over behind the bench. A year after graduating, he joined Vaughan’s staff as an assistant coach.

“It’s quite an impressive feat to have the longevity that Vaughan has had in coaching,” said Fogarty, who is now the head coach of the men’s hockey team at Princeton.

“He’s always looking to enhance the student-athlete experience. As a coach, he has his teams very well prepared, competing at the highest level and demanding excellence.”

“His coaches will do a tremendous job without him behind the bench because everyone speaks under one voice,” he said.

The pandemic has affected the men’s hockey team — and Colgate Athletics — in a number of ways. The Raiders were on a memorable run during the 2019-20 season, sweeping Brown before the ECAC tournament was canceled. Last season, the team only played a partial schedule.

Like many teams across the country, Colgate has been navigating through changing COVID protocols over the past few weeks — in some cases postponing games or competing while some participants are unavailable.

Paul McAvoy ’21, a co-captain, said the Raiders will have to adapt to playing without their coach. He said Vaughan has prepared the team to compete and work hard under any circumstance.

“Coach Vaughan leads our team with his undeniable passion and energy,” McAvoy said. “He shows how much he cares about this program and each individual player on a daily basis. His impact on the team comes with the intense passion he brings to the rink, and all of the guys use that as a guide.

“Being his first missed game in 29 years, his exceptional streak shows how much he really loves the game and this team. Unfortunately, there are some things in the world we just can’t control right now.”

Vaughan is in his 29th season as head coach. He holds the most wins in program history with 443. The Raiders have made 26 appearances in the ECAC Hockey Tournament during his tenure. He’s a two-time ECAC Coach of the Year.

His name was endowed as the head men’s hockey coaching chair in 2007.

Vaughan said he’s lucky to never have missed a game until now.

“It’s really amazing that with all that we go through in life nothing prior to this interfered with me getting behind that bench on any given game day. I have been very fortunate,” he said.