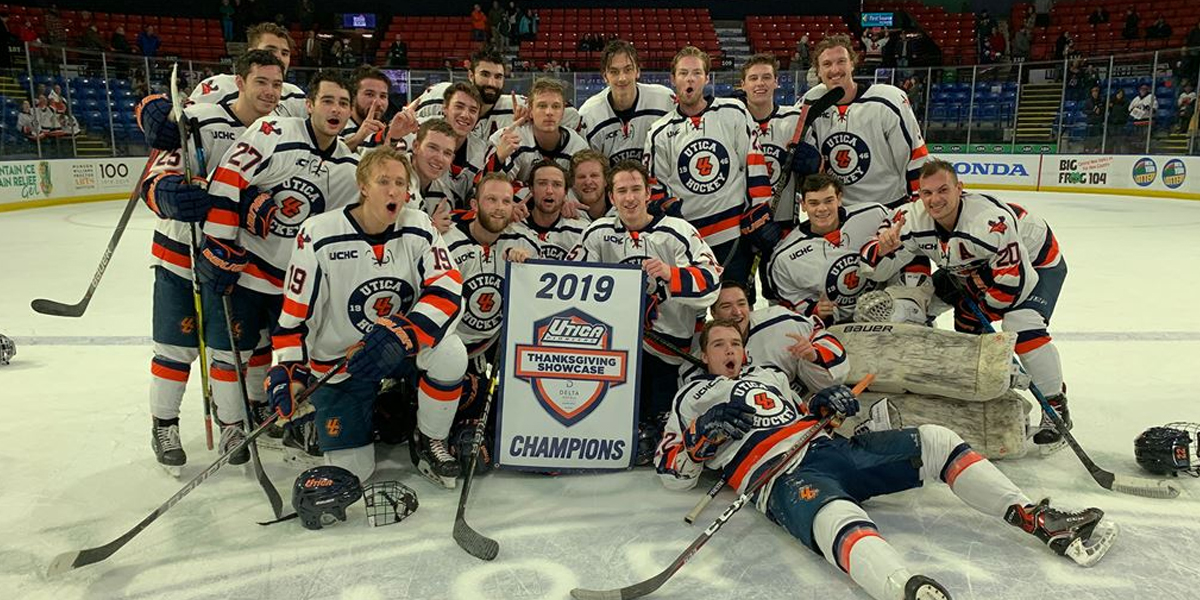 Gary Heenan’s Pioneers struck first at 7:11 in the first period. Buster Larsson (Syracuse Stars) fed a pass to Regen Cavanagh (Sioux Falls Stampede) whose shot went wide, but was able to regain control and get it to Justin Allen (Rochester Monarchs) whose shot did make it into the back of the net. That was the only score of the first period.

The second period was a defensive battle until Brandon Osmundson (Hampton Road Whalers) got the puck to Nick Yzaguirre (Charlotte Rush) whose shot missed, but Tyler Dill (Charlotte Rush) forced the turnover and got the puck to Rome, NY native, Joey Rutkowski (Smiths Falls Bears), for his first goal of the season. Rutkowski dangled the puck around the right side of Plymouth’s goalie, Andreas Pettersson (Ogden Mustangs) for the game winner.

The third period caused a scare for the Pioneers. Just 41 seconds into the third period, Gianluca Baggetta (North York) was injured during his 14th save of the night and had to leave the game. Sean Dickson (Hampton Roads Whalers) came into replace him. It didn’t take the Panthers long to strike. At 5:00 JR Barone (Philadelphia Flyers) was able to get Jarrett Slear’s (NH Avalanche) and Myles Abbate’s (Proctor Academy) rebounds past Dickson for his first goal of the season.

That was all Plymouth State would get past Dickson (5 saves); despite pulling Pettersson (42 saves) with a minute left and taking a time out at 19:44.

On Saturday night, Oswego State beat Plymouth State 8-0 in the consolation game. Then it was onto the main event, unbeaten Salve Regina taking on the home team. The Pioneers knew they had to strike first and often to have a chance. They did just that.

Utica did not let up on their attack in the second. National freshman scoring leader, Osmundson lit the lamp at 2:25 with a redirect from Tyler Dill (Charlotte Rush) and Ott. The Seahawks decided to pull goaltender Louis-Felix St. Jean (Islanders Hockey Club) after that goal. He had 16 saves in his first loss of the season. Three minutes later, Donovan Ott scored on the Seahawks’ replacement goalie, Tony Rehm University of Alaska Fairbanks) with a behind the back, between the legs shot that should make ESPN’s top 10 of the week recap. Osmundson and Jamie Bucell (Philadelphia) were credited with the assists. Salve Regina did get on the board with an unassisted short handed goal by Cayden Kraus (Bonnyville Pontiacs) at 13:05 in the second. However, that was the only Seahawk goal of the game.

Utica learned from watching the Oswego State/Salve Regina game the night before to not give the Seahawks any opportunities in the third. Bucell sniped over the right shoulder of Rehm (26 saves) at 2:44 in the third. Zapata and UC’s captain Jarrod Fitzpatrick (Northern Cyclones) assisted. Pioneer goalie Sean Dickson (22 saves) stood strong to hand Salve Regina its first loss of the season. As of December 1st, there are now only two unbeaten men’s college hockey teams in the nation.

Utica College continues UCHC play next weekend when they travel to Chatham and Stevenson.