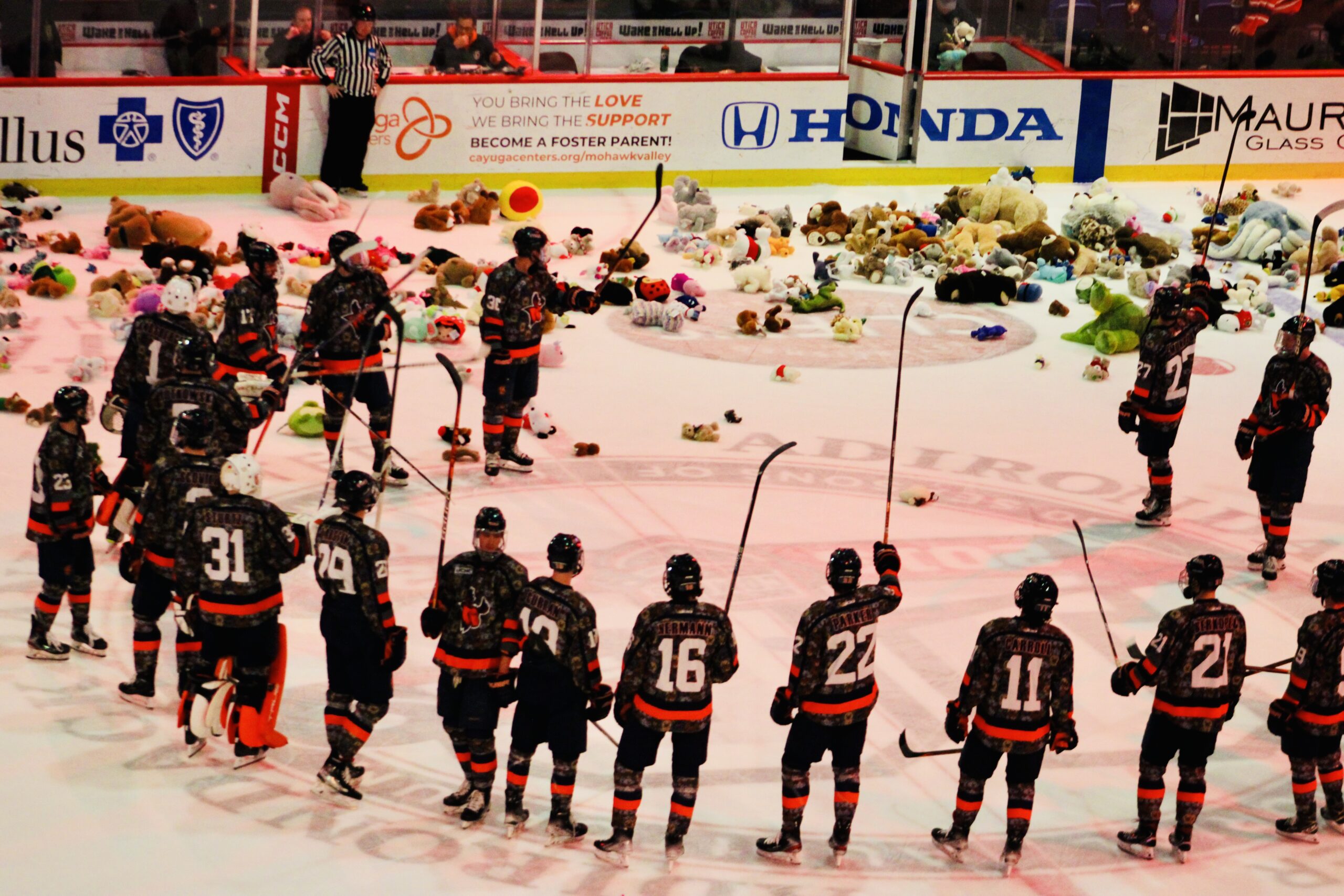 Saturday night was already going to be the biggest night of the regular season for the third-ranked Utica Pioneers (8-2-1 overall, 6-0-0 UCHC) as it was the annual New York Sash Teddy Bear Toss night. A sold-out crowd that filed into the Adirondack Bank Center was also going to get to see a game that had massive implications in the national rankings, as the Pioneer’s opponent was Central New York rival and seventh-ranked Oswego State Lakers (7-4-0 overall, 5-1-0 SUNYAC).

The Lakers entered Saturday night’s game in what must have been a grumpy mood. They hosted their own teddy bear toss on Friday night at the Deborah F. Stanley Arena, and while fans were able to throw their stuffed animals on the ice, the home team was upset by Central New York neighbor the Morrisville Mustangs by a score of 3-1. After the stunning loss to Morrisville, Oswego traveled to Utica needing to beat the Pioneers to snap a surprising two-game losing streak.

Utica took the ice on Saturday night on an eight-game unbeaten streak but skated to a 2-2 tie with the Trine Thunder the last time they played (the Pioneers won the shootout). Saturday night’s game was also the conclusion of a seven-game homestand for the Pioneers.

A raucous crowd at the Adirondack Bank Center would see both teams get early scoring opportunities that they did not convert. Utica goaltender Bryan Landsberger made an outstanding save on Oswego’s Matt McQuade on a point-blank chance in front of his net, while Lakers goaltender Cal Schell did all he could to spoil the festive mood by turning aside a barrage of Pioneers shots. The home team broke through with 5:55 left in the first period, however, as Lucas Herrmann sprung Mic Curran on a breakaway and Curran did the rest. He beat Schell with a wrist shot to the glove side spurring the crowd to rain down teddy bears and other assorted stuffed animals onto the Adirondack Bank Center ice.

Although the Pioneers dominated the puck possession and shots (17 to 5), Curran’s goal was the only goal of the period, and the team headed to the first intermission with the score 1-0. There was a sense that Oswego had weathered the storm and could turn things around in the second period.

The Pioneers, however, had other plans. After an early push from Oswego, Utica put the hammer down so to speak and it would pay off. At the 9:00 mark, Dante Zapata took a pass from Regen Cavanagh and snapped a shot past Schell from the top of the left circle to put the Pioneers up by two goals. Two and half minutes later, Khristian Acosta took a pass off the right side boards from Shane Murphy, skated into the Oswego zone, and wired a shot past Schell from the top of the circles to make it 3-0. With a minute and thirty-six seconds remaining in the frame, Utica’s John Moncovich got his third goal of the season when he beat Schell from the bottom of the left circle off of a nifty backhand cross-crease pass from Buster Larsson to give the Pioneers a 4-0 lead after forty minutes of play. By this point, Utica had outshot Oswego by a 32-13 margin.

There would be no scoring in the third period, but that’s not to say there were no fireworks. With about five minutes remaining, the teams came together for some confrontations near the Utica net which ultimately resulted in Oswego’s Matt McQuade getting ejected. When the final horn sounded, the Pioneers had defeated the Lakers by a score of 4-0 and Bryan Landsberger earned his first shutout of the season.

Notes: Utica outshot Oswego 45-23…Utica was 0 for 3 on the power play, and Oswego was 0 for 1…Khristian Acosta led the Pioneers in points with one goal and one assist. Acosta has four goals in his last three games…Lucas Herrmann was 10 for 10 in the faceoff dot for Utica…With the win, Utica goaltender Bryan Landberger’s record improves to 8-2-1…Oswego plays again on Friday night at Buffalo State…Utica plays again on Saturday night in Plymouth, Michigan for an exhibition game against the Team USA Under 18 Team.

Three Observations From The Game

This was Utica’s best game of the season so far

After being slowed down to a 2-2 tie in their last game by a stingy Trine Thunder team, the schedule did not get any easier for the Pioneers – as the Lakers entered this game ranked seventh in Division III. They responded by putting together their best and most complete game of the season thus far.

The offensive pressure from Utica was relentless for the vast majority of the game, and it began with the Pioneers being able to consistently break out of their own zone in the up-tempo style they like to play. With All-American defenseman Justin Allen expected to be back in a few weeks, the transition game should only get better.

Bryan Landsberger faced only twenty-three shots but made several big saves, that frustrated the Oswego State attack. He looked quick and sharp all night long, as certainly earned the shutout. Despite giving up four goals, Landsberger’s counterpart Cal Schell played a very good game as well. Schell was especially excellent in the first period, keeping his team in the game under heavy pressure from the Pioneers.

The Moncovich-Carroll-Larsson line was excellent tonight

All four Pioneers lines were excellent tonight, but the Moncovich-Carroll-Larsson really stood out. This was only the fourth game of the season for freshman Chris Carroll, but he played with speed and confidence all night long. Buster Larsson was a physical presence and had the backhand pass that set up the Moncovich goal (which Carroll had the secondary assist on as well). Speaking of Moncovich, not only did he score but he also led the Pioneers in shots with seven. This was his second goal in three games, and after a slow start to his season goals-wise, it seems like the big forward is heating up, and even more tallies will be coming soon.

Will the Pioneers move up in the poll?

It’s been a wacky past two weeks for upsets in the USCHO top fifteen, and that trend continued this weekend. The biggest one as far as the Pioneers are concerned was the second-ranked Augsburg Auggies falling to unranked St. Olaf on Saturday. With their big win over Oswego, Utica may just find themselves as the new number two team in Division III when the new poll comes out on Monday. 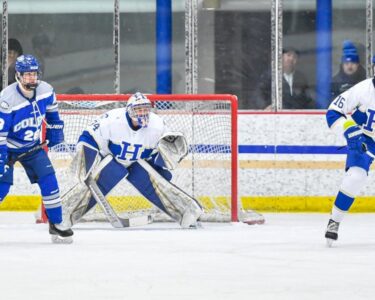 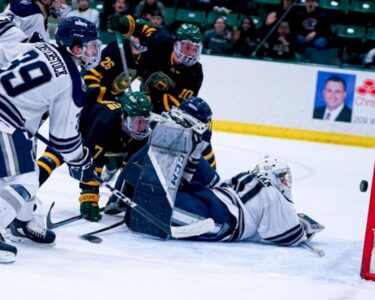 Lakers Use Dominant Second and Third Periods to…