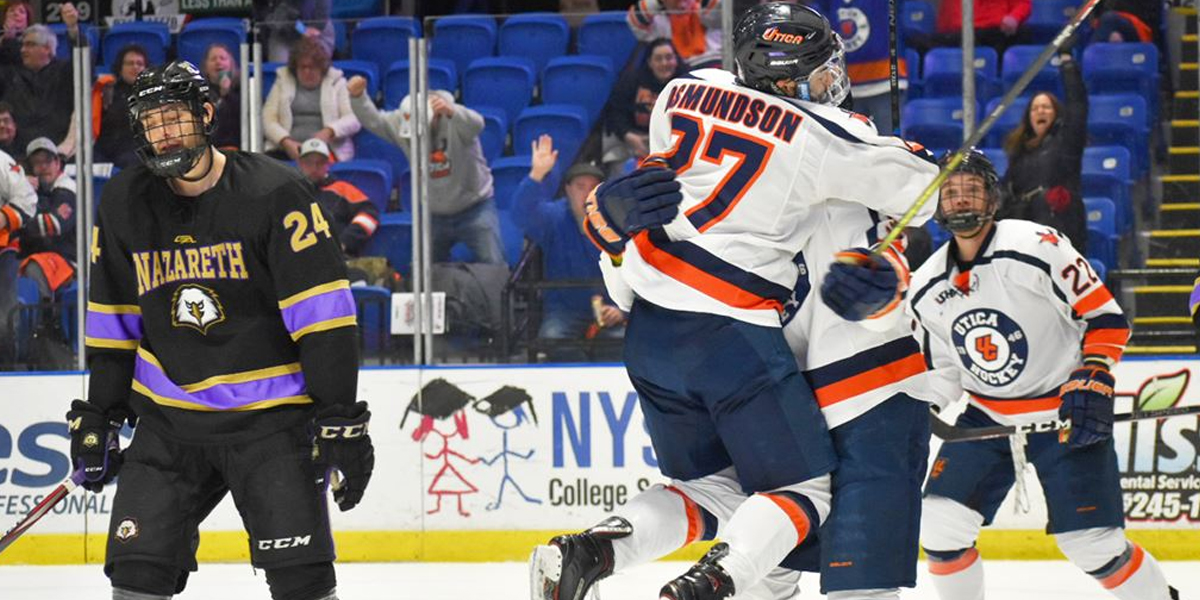 The 2019-2020 Utica College Pioneers made history on their home ice at the Adirondack Bank Center on Saturday afternoon with a 5-2 victory. The #3 Pioneers earned their 22nd win of the season to improve their record to 22-2-2 and broke the previous record held by the 2012-13 and 2017-18 teams. It was also the team’s 17th straight victory. The game was the first game of the UCHC semi-finals against the Nazareth Golden Flyers (12-12-3).

The win was not easy to come by. The first goal of the game wasn’t scored until 12:08 on a Pioneer power play. Conor Landrigan (Binghamton Jr. Sens) got the puck out of the open ice and to the tape of Donovan Ott (RPI). Ott found a fast charging Dante Zapata (Austin Bruins), who was able to bank his own rebound past the Flyers’ goalie, Michael Tiflord (Connecticut Oilers) to put Utica up by one.

The second period felt like the game’s momentum changed in Nazareth’s favor. On a power play, the Flyers’ tied it up, Zander Pryor (Stratford Cullitons) zipped along the boards down into the Pioneers’ zone and surprised Utica’s Gianluca Baggetta with a wrap around at 6:33. Within the last 10 seconds of the period the Pioneers thought that they had moved ahead when Daniel Fritz’s (Canisius College) shot lifted Tilford’s water bottle off the net. Since none of the officials were in a position to confirm it crossed the goal line, the goal was waved off. This lit a fire on the Utica bench and on the following faceoff, Ott quickly got the puck to Kasper Kjellkvist (Curry College) whose perfect pass allowed Landrigan to one touch it past Tilford at 19:59. The Pioneer were back up by one.

Once again, the Golden Flyers tied it up at 5:42 in the third. Pryor found Michael Houlihan (Philadelphia Jr. Flyers), whose shot somehow made it past Baggetta. The Pioneers quickly took back the lead at 6:08. The Hampton Roads Whalers’ line of Brandon Osmundson, Vaden McManus and John Moncovich got the job done. Moncovich earned the goal with assists from Osmundson and McManus. At 8:15 Fritz fired a rocket from the blue line to come within two points of tying Dalton Carter’s record of highest scoring defensive player for the Pioneers. This power play goal was scored with assists from Osmundson and Landrigan. On the last Pioneer goal scored by Moncovich at 13:45, Osmundson earned his 40th point of the season with an assist. He is the second rookie in Utica’s history to do so. Buster Larsson (Syracuse Stars) was also credited with an assist.

The #3 Utica College Pioneers (23-2-2) proved to everyone why they are ranked #1 in the UCHC playoffs by winning a nail biter of a game over the Golden Flyers of Nazareth College (12-13-3) with a score of 3-2. Sunday afternoon’s game at the Adirondack Bank Center was a must win for Nazareth if they wanted to force a mini-game to see who would go to the UCHC Championship game against Wilkes.

It looked like the second period would also end with scoreless. Tilford stood strong while the Pioneers tried to create confusion in front of him. Finally, at 11:50, the Pioneers slid one by him. On a power play, Dante Zapata (Austin Bruins) poked it up to Conor Landrigan (Binghamton Jr. Sens) on the left side, who found Donovan Ott (RPI). Ott’s shot from the left side got a lucky deflection off of a defender and into the net. Utica carried the momentum and scored its second goal two minutes later. Senior Captain Jarrod Fitzpatrick (Northern Cyclones) continued to be the team’s workhorse for creating scoring opportunities. Fitzpatrick found UCHC’s Player of the Week, Eric Holland (Brockville Braves), who somehow got it through traffic to the tape of Cameron Bartkoski’s (Amarillo Bulls) stick. His shot from the right side’top of the circle lit the lamp. Utica wasn’t done. Daniel Fritz (Canisius College) came within one of tying with Dalton Carter for the second most points scored in a season by a defensive player when he was credited with the assist on Vaden McManus’ (Hampton Roads Whalers) goal at 18:13. Fritz passed to Tyler Dill (Charlotte Rush) who pushed it on to McManus. McManus shot from inside the right circle over Tilford’s short side. Tilford did not see it coming. The Pioneers took a comfortable 3-0 lead into the locker room at the second intermission.

Nazareth was not going to be defeated without a fight. The Golden Flyers seized their own opportunities when the Pioneers’ defense seemed to break down. Grant Gallo (Charlotte Rush) entered the Pioneers’ zone with Casey Kubara (Philadelphia Junior Flyers). They were able to pass it back and forth before Kubara’s shot went top shelf over Baggetta at 5:12. James McDonald (Vermont Lumberjacks) was credited with the secondary assist. Four minutes later, McDonald and Kubara were able to capitalize on another defensive breakdown for the Pioneers. Kubara saw Skaneateles, NY native, Owen Kuhns open. Kuhns passed it to McDonald who was in an open lane and shot the puck from the left circle. His shot hit the top right corner and went bar down behind Baggetta. Sensing blood in the water, the Golden Flyers pulled Tilford (30 saves) with 1:17 left to play for an extra attacker. Despite many attacks, Baggetta (15 saves) and his team were successful at keeping the puck out of the net. With their 23rd win of the season, the 2019-20 Pioneers continue to set records.

Utica College will play Wilkes for the UCHC Championship on Friday, March 6th and Saturday, March 7th at the Adirondack Bank Center. Both games begin at 7pm.

Utica Men Have Game Suspended While Looking for…