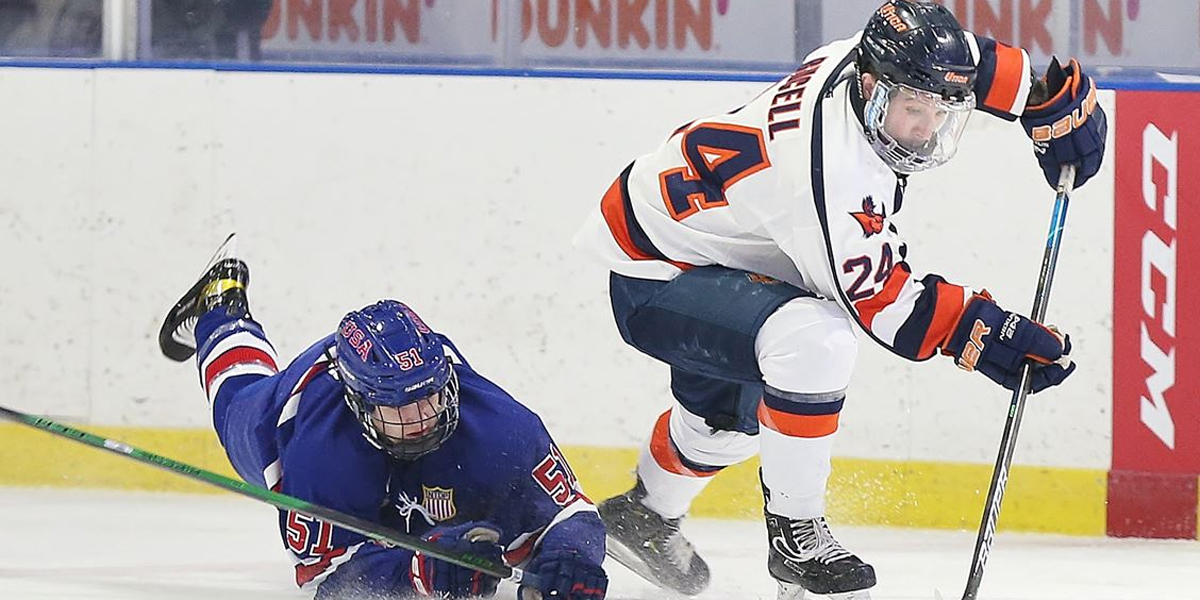 The last time the Utica College Pioneers played the Wilkes University Colonels was in the 2019-2020 UCHC Finals. Utica won that series and went on to earn a berth to the NCAA DIII Tournament. One year later, the Colonels were not only able to claim victory over the Pioneers, they also broke the NCAA DIII longest active win streak. Utica saw its school record twenty wins streak stopped in Wilkes-Barre, Pennsylvania on Friday night.

It was clear that Wilkes had revenge on the mind. The pace of play was very quick and they were able to get on the board first. Donald Flynn (New Jersey Rockets) caught the puck in the neutral zone while Phil Erickson (Northern Cyclones) was able to skate around a fallen defender to dangle and out maneuver UC goalie Sean Dickson (Hampton Roads Whalers) at 18:47. That was the only goal of the first period.

Gary Heenan’s crew came out for the second period ready to score. However, the Colonels were very aggressive on the penalty kill and the Pioneers went 0/3 on the power play. The Pioneers were able to even the game at one apiece at 16:08. Blake Holmes (Minnesota Wilderness) and Conor Landrigan (Binghamton Jr. Sens) were able to get the puck from the blue line to John Moncovich (Hampton Roads Whalers) whose second shot got past Baldwinsville, NY native and Wilkes goalie, Michael Paterson-Jones (Charlotte Rush). This was Holmes’ first collegiate career point and was the only goal of the second period.

A turnover in the neutral zone caused by Dylan Kuipers (PAL Islanders) allowed former Pioneer Tyler Dill (Charlotte Rush) to pull Dickson to one side while shooting the puck into the other side of the net at 5:12 to give Wilkes the lead once again. A couple of penalties caused Utica to be on the wrong end of a 5 on 3 penalty kill. Dickson took as many shots as college students on spring break, but was able to stop them. Unfortunately, the Colonels’ Tyler Barrow (Charlotte Rush) took advantage of a 5 on 4 power play to weave through some traffic and light the lamp at 11:08 to double their lead. He was unassisted. It looked like the Pioneers were ready to come back when Jamie Bucell (Philadelphia) found Nick Yzaguirre (Charlotte Rush) in confusing traffic for Paterson-Jones to score short handed at 13:17. The Pioneers tried to even it up with a minute left in the game when they pulled Dickson, but the extra attacker didn’t help and the Pioneers suffered their first UCHC loss since 2019.

Dickson had 18 saves on the night and Paterson-Jones had 24.

The Pioneers took advantage of their home ice and had revenge on their minds at the Adirondack Bank Center in Utica, NY on Saturday night. Even though there were no fans in attendance, it was a strong home opener that showed the Colonels whose house it is.

The first period looked like it was going to be a case of deja vu. At just 5:23 Barrow slid the puck past Joseph Giacobbo (Rockland Nationals), who was in between the pipes for Utica, with assists from Dill and the alliterative Billy Berry (Charlotte Rush). While Buster Larsson (Syracuse Stars) and Dante Zapata (Austin Bruins) were passing it around the offensive zone, they got it back to Brett Everson (Hawkesbury) who shot a rocket from the blue line to get by Paterson Jones at 10:53. To avoid another loss, the Pioneers added a go ahead goal at 16:39. Landrigan got the puck to Cameron Bartkoski (Amarillo Bulls). Bartkoski’s shot was deflected into the net by Moncovich.

The Colonels came out strong in the second. At just 1:39 Angelo Marquart (New Jersey Rockets) scored on a quick entry with assists from Flynn and Paul Cimilluca (WBS Knights). Two minutes later the Colonels took advantage of the power play with Flynn scoring this time with assists from Barrow and Nick Fea (New Jersey Rockets) to take back the lead. That was the last time, though. At 9:39 Bucelll continued his point streak with assists from Vaden McManus (Hampton Roads Whalers) and Brendan Schultz (Topeka) to earn their first points of the season. Seventy seconds later Larsson scored his first goal of the night with assists from Zapata and Everson. At 14:49 the Pioneers were able to take advantage of the power play for the first time all weekend. This time Larsson and Regen Cavanagh (Sioux Falls Stampede) assisted Bucell to put the Pioneers up by 2. Yzaguirre added a late period goal at 18:58. He was assisted by Bucell and Schultz.

Another opening period goal was scored at 1:44. This time it was Wilkes’ Devon Schell (Connecticut Rangers) assisted by Erickson and Dill to bring the Colonels within 2. Even though Zapata scored within two minutes, it was Brandon Osmundson’s (Hampton Roads Whalers) assist that started his point streak. Everson’s assist on Zapata’s goal increased his point total to three. Osmundson scored his first goal of the year at 8:54. He was assisted by Landrigan and Cavanagh. The Colonels decided that Paterson-Jones’ time in the net was done after Osmundson’s goal. He had 17 saves on the night. It didn’t matter to Osmundson. At 11:06 he scored against Wilkes’ new freshman goalie, Luc Fox (Charlotte Rush). Landrigan and Cavanagh were credited with the assists. Thirty seconds later, Everson showed Fox what DIII hockey in Utica is about when he lit the lamp with assists from Bucell and Yzaguirre. Dylan McMahon (Kanata) scored his first collegiate goal at 15:36. His short handed goal was assisted by Brandon Young (Johnstown). The Pioneers may only have 22 players on its roster this year, but it’s deep. The Colonels didn’t give up though. While on a power play, Fea scored at 17:16 to bring the final score to 11-5 in favor of the Pioneers. He was assisted by Barrow and Nick Godfrey (Corpus Christi Ice Rays). Both teams are now 1-1 in the UCHC.

The Pioneers don’t have to worry about a split next weekend. They host Chatham for a matinee on Saturday, February 27th and then they travel to Manhattanville to face the Valiants. The puck drops at 5:30.