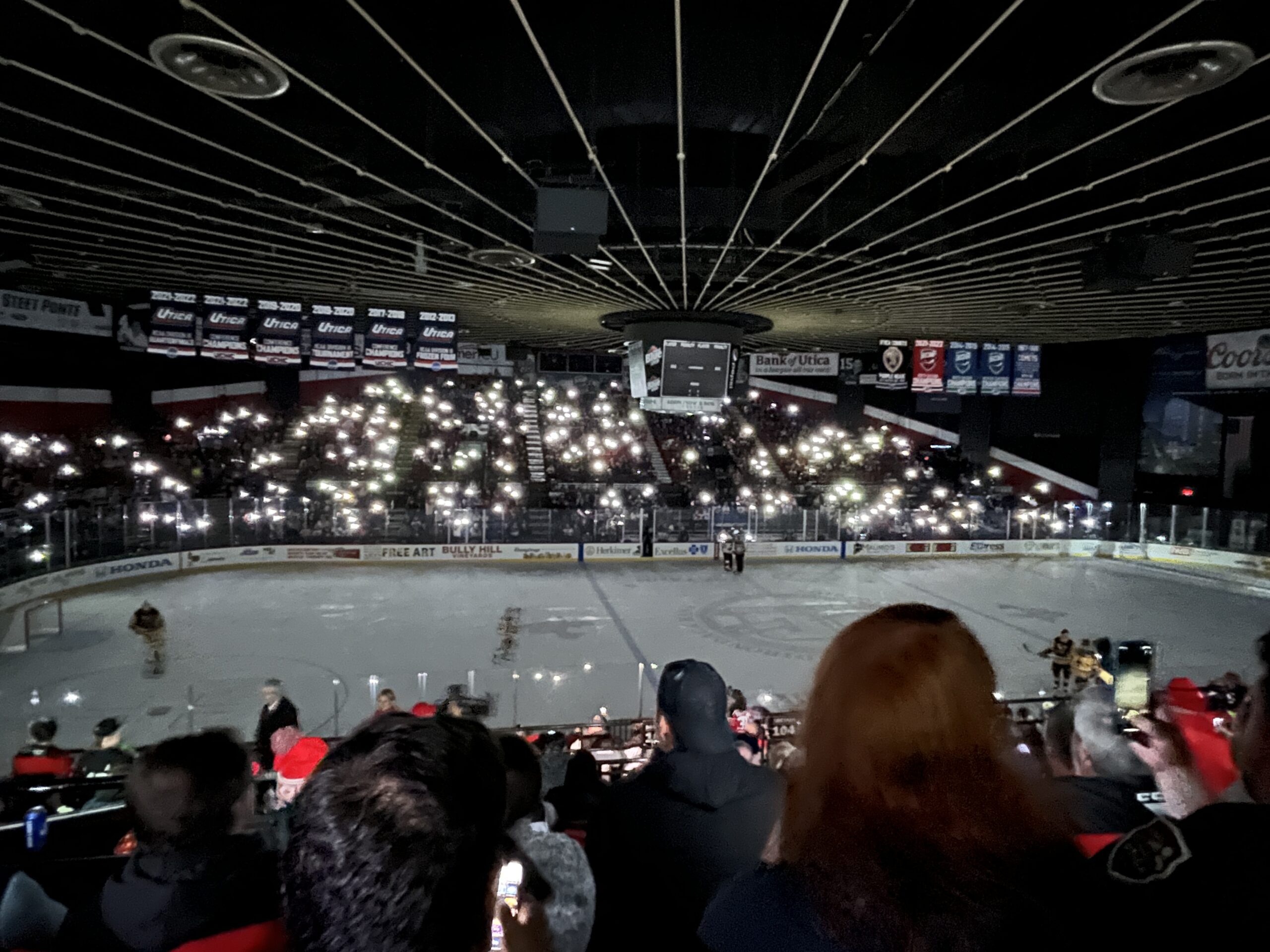 It was a festive atmosphere in the City of Utica on Monday as the hometown Comets returned for their first game at home of the 2022-23 season. This season marks the tenth season of Utica Comets hockey, and it was thirty-five years to the day the team’s AHL predecessor, the Utica Devils, played their first game. Monday night would be a night no one will ever forget, however, for a very surprising reason.

To kick off the celebration, the team held a meet-the-players event at the 72 Tavern and Grill adjacent to the Adirondack Bank Center. Beginning at 4 pm, several Comets made their way through to the delight of the crowd gathered, as they met fans and signed autographs. Naudie (the Comets mascot) also helped get the crowd fired up for the game against the Wilkes-Barre/Scranton Penguins that was soon to take place.

A packed house at the Adirondack Bank Center roared in approval for the team as they were introduced. After the coaches, staff, and players were introduced, the team’s 2021-22 North Division regular season championship banner was unveiled – taking its place among the banners the team has previously won.

After the opening night ceremonies were over, it was time to play the game. The first period would prove to be wide open for the most part, as a total of twenty-three shots on goal were registered between the two teams (twelve for Utica and eleven for Wilkes-Barre/Scranton). It was the home team, however, that would score the goals. The first Comets goal came at the 9:03 mark when newcomers Jack Dugan and Nick Hutchison hooked up to open the scoring, as Dugan sent a centering pass from the left side boards to Hutchinson, who snapped a shot over Penguins goaltender Filip Lindberg and into the for his first goal of the season. Just over six minutes later, Utica’s Robbie Russo stepped into a loose puck at the right point of the Penguin’s zone and blasted a slapshot into the top left corner of the net to extend the Comet’s lead to two – a score that would hold through the rest of the period.

It was a role reversal in the second period, as Wilkes-Barre/Scranton pushed the pace of play in their favor right from the opening faceoff. Their efforts would pay off at the 9:38 mark, with the Penguins on the power play, Ty Smith snapped a wrist shot from the top of the left circle through a screen and past Utica goaltender Nico Daws to get his team on the scoreboard.

After the Smith goal, Wilkes-Barre/Scranton continued to control the pace of play, limiting the Comets to just two shots on goal through seventeen minutes of the period. Despite the possession domination, Daws was able to hold off the Penguins with several big saves. It looked like the visitors would have a golden opportunity to tie the game, as Utica’s Mason Geersten took an unsportsmanlike conduct penalty as a result of a skirmish in front of the Penguin’s net. Before the power play could happen, however, the ultimate penalty killer showed up.

The lights went out at the Adirondack Bank Center.

As the teams and fans alike waited for the lights to come back on, it was becoming obvious that wasn’t going to happen anytime soon. After approximately twenty to twenty-five minutes after the initial power outage, officials ordered the Adirondack Bank Center to be evacuated, and soon after that, the game was officially suspended at the 2:43 mark. The remainder of the game will be made up at later date, according to Comets officials.

Although it wasn’t a complete game, here are three observations from the portion of the game that was played.

The defense is definitely involved in the offense.

One of the questions for the Utica Comets entering this season was how would they make up for losing their top four scorers from last season.

The answer might very well be in their defense corps. The Comets had fourteen shots on goal when the game was suspended, and eight of them were taken by their defensemen. It was a defenseman (Robbie Russo) who also has the go-ahead goal for the time being, so it could be the defense that ends up driving the offense this season for the Comets. Getting offense from your blue line is never a bad thing, especially if it can help take some scoring pressure off of the young Comets forwards until they get acclimated to the AHL game.

Mason Geersten might quickly become a fan favorite in Utica.

Geersten, who was assigned to Utica from the New Jersey Devils last week, is known for his physical play. That physical play was on full display on Monday night, as I counted five hits he threw in just one shift. It was his drive to the net that sparked a skirmish right before the lights went out as well, and it is obvious from his two games played for Utica this season that opponents will need to be well aware of when he is on the ice – and what fanbase doesn’t love a big physical player?

At least this game will never be forgotten.

Was anyone else reminded of game four in the 1988 Stanley Cup Final?