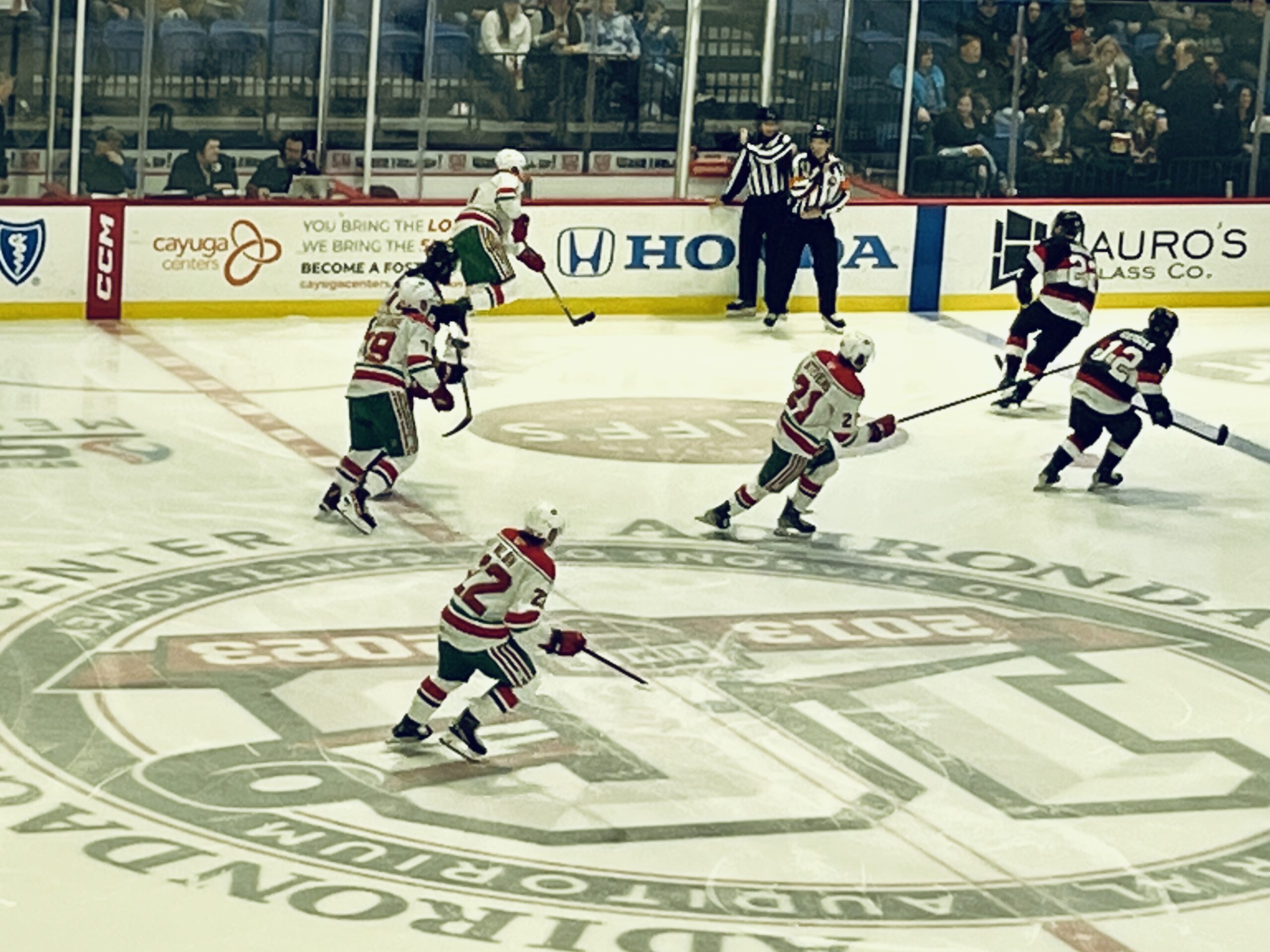 For the first ten minutes of the game, it looked like both teams had already had their Thanksgiving dinner as they registered a total of three shots on goal between them. That would change as the Comets turned up the offensive pressure in the latter half of the frame, and would be rewarded with two goals. The first came on the power play when Comets captain Ryan Schmelzer fired a shot at Belleville goaltender Kevin Mandolese stopped but Nolan Stevens put the rebound in the back of the net for his goal of the season.

A look at how the teams matched up against each entering the game: Utica Comets Vs Belleville Senators Game Preview 11-23-2022.

With forty-eight seconds left in the period, another Comet got his first goal of the season when defenseman Robbie Russo beat Mandolese with a backhand shot into the top of the net off a slick backhand pass from Schmelzer to send the home team into the first intermission with a 2-0 lead. After registering only one shot on goal through the first ten minutes of the period, the Comets ended up outshooting the Senators by a ten to three margin after twenty minutes of play.

In the second period, it was the Senators who put the Comets on their heels, as they fired thirteen shots on Utica goaltender Nico Daws. This was helped by the two power plays they had in the period, but the Comets weathered those storms as they killed both advantages for the visitors. Although they were unable to capitalize on their power play chances, the Senators were able to get one back when Jarid Lukosevicius tipped a Dillon Heatherington shot from the left circle past Daws and in to cut the Utica lead to one goal heading into the third period.

The Comets regained their two-goal advantage at about six and a half minutes into the third period, when Joe Gambardella drove into the Senator’s zone and slid a pass to Graeme Clarke, who snapped a shot past Mandolese from the right circle to make the score 3-1. Belleville made it interesting with just over two minutes remaining, as former Comet Cole Cassels scored with the extra attacker on the ice (Mandolese has been pulled) to make it 3-2. That would be all they would get, as Utica would put the clamps down for the rest of the game and secure a much-needed two points in the North Division standings.

Notes: Belleville outshot Utica by a 28-27 margin…Utica was 1/1 on the power play, and Belleville was 0/2…Graeme Clarke (1 goal and 1 assist) and Ryan Schmelzer (2 assists) led both teams in points…Clarke also led the Comets in shots with 4…The Comets play again on Friday at Charlotte with a start time of 4 pm EST.

Three Observations From the Game

Coming into this season, Graeme Clarke was one of the players the Comets hoped would fill the goal-scoring void left by the departures of AJ Greer, Chase DeLeo, Fabian Zetterlund, and the now returned (for now) Alexander Holtz. Now in his third AHL season, Clarke scored his first goal of the season on October 21st but none since until this game. It certainly hasn’t been from a lack of trying, as he leads the Comets in shots thirty-seven.

Clarke’s goal on Wednesday night proved to be the game-winner and could be the boost he needs to get his goal-scoring on track. He is obviously willing to shoot the puck, so more goals should be coming Clarke’s way.

I mentioned in the preview for the game that the return of Kevin Bahl will help the Comet’s penalty kill units which were ranked in the bottom half of the AHL. Overall, the Comets are ranked twentieth in the league with a 76.9% success rate.

The penalty kill has been steadily improving over the past five games. On Wednesday night, the Comets would be put to the test, facing a powerful Senators power-play that was fourth in the league entering the game with a success rate of 25.9%. Utica passed with flying colors, holding the Senators to no goals and only three shots with the man advantage. Over the past six games (including tonight), the Comets have killed thirteen of fifteen opponents’ power plays for a success rate of 86.7%. Continued special teams’ success will be key if the Comets are to climb up the standings in the North Division.

The Utica Comets Are Far From Out Of It

A quick look at the standings will show the Comets in last place in the North Division standings with twelve points, but it’s not as bad as it seems.

Utica has also played at least three fewer games than everyone else in the division and five less than the Laval Rocket – whom they trail by one point for sixth place. Toronto and Rochester are off to good starts but once again five teams will qualify for the playoffs from the North Division (on a basis of points and not winning percentage), so there is a lot of time left for Utica to get back in the thick of things. After this weekend’s two-game series in Charlotte, the next six opponents for the Comets are from the North Division – certainly, a great opportunity to gain traction in the standings.

A Statistical Preview of the Utica Pioneers Thanksgiving Showcase