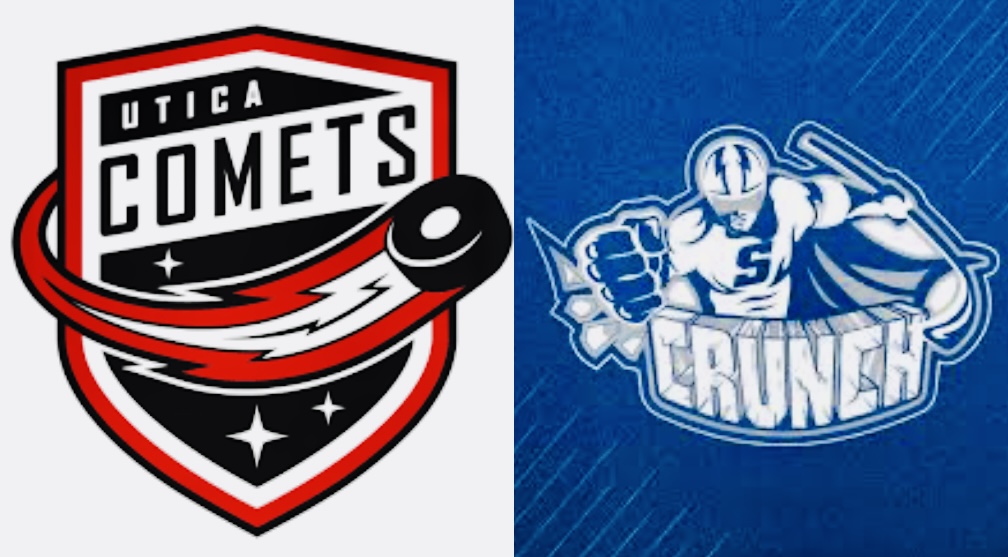 The Utica Comets visit Salt City on Monday afternoon for a matinee game against the Syracuse Crunch. This is the third of fourteen regular-season meetings between the teams with the Crunch winning both games that have been already played. The teams will get plenty used to (or irritated) each other this week, as they will play one another on Friday and Saturday as well.

The Comets and the Crunch are among the most bitter rivals in the American Hockey League, driven by close proximity to each other geographically and usually in the standings as well. As of Monday’s game, the Comets are in second place in the North Division and have been playing very well since the start of December. Although their twelve-game points streak was snapped on Friday against Providence, they rebounded with a 5-1 thrashing of the Bridgeport Islanders on Saturday night. Utica is 7-1-2 in their last ten games, and are still missing their second-leading goal scorer, Nolan Foote, who is with the New Jersey Devils.

The Crunch trail the Comets in the North Division standings by nine points, but have two games in hand on their rival from Utica. Syracuse has an explosive offense that is fourth overall in the league in goals scored per game. That offense is led by defenseman Darren Raddysh and forward Alex Barré-Boulet. Raddysh has been having an incredible season, as he is fourth in the AHL in points and is tied with Barré-Boulet for second in the league in assists. He leads all defensemen in goals and points, is second in assists, and is tied for second in shots among players at that position.

Both the Crunch and the Comets do a lot of damage in the third period. Syracuse leads the league in third-period goals scored with fifty, while Utica is outscoring their opponents by a 40-23 margin in the third frame.

With an intense rivalry renewing on Monday afternoon, let’s take a look at how the teams match up against each other.

Monday afternoon’s game is scheduled to begin at 1 pm EST. Radio coverage will be on K-Rock and the television broadcast will be on AHLTV. For more information about the Utica Comets visit https://uticacomets.com and for more about the Crunch visit https://syracusecrunch.com.