Utica Claims Sole Possession Of Second Place in the UCHC 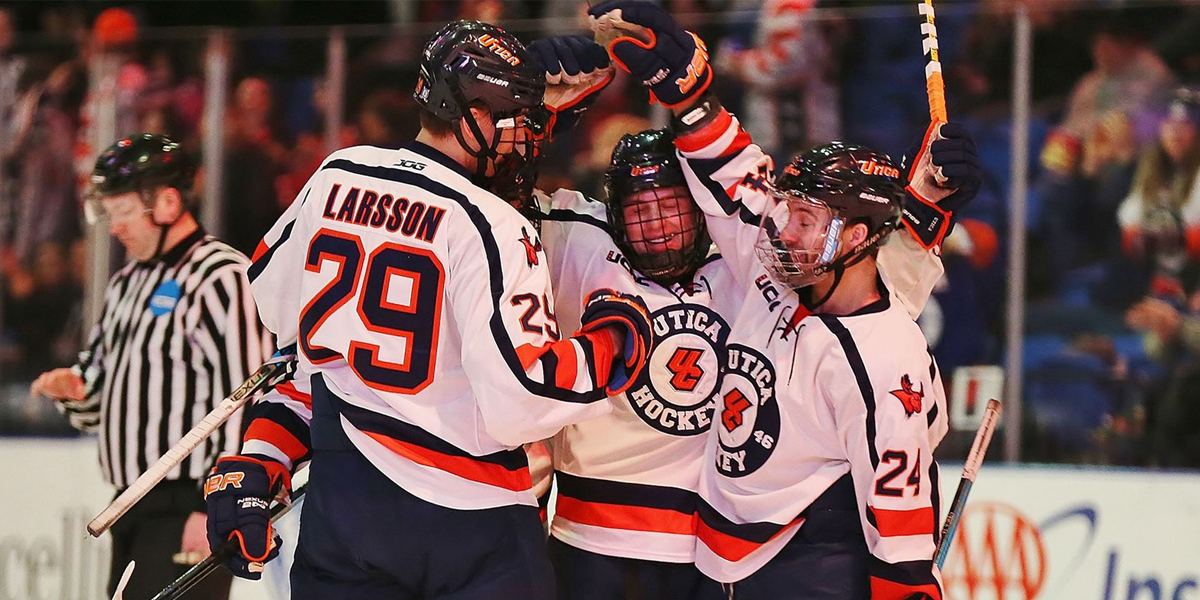 The #4 nationally ranked Utica College Pioneers (17-2-2, 11-2-1 UCHC) brought their twelve game win streak back to home ice on Friday night to take on the Chatham University Cougars (3-18, 2-12 UCHC). As expected, the Pioneers rolled to an easy 6-0 victory to increase their win streak to 13.

It didn’t take Utica very long to get on the scoreboard. At 1:58, Regen Cavanagh (Sioux Falls Stampede) got control of the rebound from Kasper Kjellkvist’s (Curry College) shot and found a wide open Cameron Bartkowski (Amarillo Bulls). Bartkowski’s shot found the back of the net to take the Pioneers up by one. Justin Allen (Rochester Monarchs) found Conor Landrigan (Binghamton Jr. Sens) waiting for the puck. His shot was deflected by John Moncovich (Hampton Roads Whalers) to make it a two goal lead at 13:19. Ninety seconds later, Brendan Schultz (Topeka) passed the puck to Buster Larsson (Syracuse Stars), who found the tape of Tyler Dill’s (Charlotte Rush) stick at the blue line. Dill fired a rocket over the shoulder of Chatham’s goalie, Ricardo Gonzalez (Toledo Cherokee).

The Pioneers were able to double their lead in the second period. While on a penalty kill, Daniel Fritz (Canisius College) was able to monopolize on Gonzalez’s mishandling of the puck. Fritz’s pressure caused a turnover that he was able to poke to Landrigan while Gonzalez was trying to get back into the crease. Landrigan found Jarrod Fitzpatrick (Northern Cyclones) in front of the open net. Gonzalez was off balance and watched as the puck trickled over the goal line behind him at 3:19. The next Utica goal was at 8:02. Again, Fritz and Landrigan worked together to find Brandon Osmundson (Hampton Roads Whalers) in the lane. The freshman’s shot was so hard that Gonzalez couldn’t handle it and the puck fell through his five hole. The Cougars’ head coach, Michael Callan, decided that Gonzalez (15 saves) had been through enough and replaced him with freshman goalie, Karl Zodda (Butte Cobras). Fritz earned his third point of the night with a beautiful one-timer at 17:42. Vaden McManus (Hampton Roads Whalers) and Larsson were credited with the assists.

No goals were scored in the third period. After saving 14 shots in the first two periods, Gianluca Baggetta (North York) was replaced by Sean Dickson (Hampton Roads Whalers) in between the pipes for the third period. Dickson would save all five shots sent his way. Zodda ended his night with 26 saves. The Pioneers outshot the Cougars in the game with a ratio of 47 to 19.

Utica College was able to sweep the series with Chatham University this season.

The always helpful staff of the Adirondack Bank Center at the Utica Memorial Auditorium should make sure their Automated External Defibrillators are charged if Saturday night’s game between #4 Utica College (18-2-2, 12-2-1 UCHC) and Stevenson University (15-5-2, 12-3 UCHC) is any indication of what the excitement level for next Saturday night’s game against Wilkes will be. Perhaps that night’s give away can be paper bags to help fans fight off hyperventilation.

Sole ownership of second place in the UCHC was at stake on Saturday night as Gary Heenan’s Pioneers looked to tame Utica native, Dominick Dawes’s Mustangs. The Pioneers brought a thirteen game win streak to the ice, while the Mustangs brought the speed. The wild ride began with the Pioneers getting on the board first. Brandon Osmundson (Hampton Roads Whalers) deflected a blue line shot from fellow former Whaler, Vaden McManus at 6:07. Daniel Fritz (Canisius College) was also credited with an assist. Team goal leader, Kasper Kjellkvist (Curry College) added a goal at 7:55 with a beautiful wrist shot on Stevenson’s goalie, Ryan Kenny’s (Islander Hockey Club) blocker side. Conor Landrigan (Binghamton Jr. Sens) and Regen Cavanagh (Sioux Falls Stampede) assisted. The Mustangs did not give up. Ryan Patrick (Philadelphia Rebels) stole a mishandled puck in the Pioneers’ zone and went top shelf over Utica’s Gianluca Baggetta (North York) at 9:06. At 19:17, the Mustangs silenced the crowd when Chris Javens (Skidmore College) pushed Nick Gray’s (Johnson and Wales) rebound past Baggetta. Patrick was credited with an assist.

The second period got off to a slow start. Referee Paul Maciejewski’s skate blade broke in half. He had to leave the ice; which delayed the game for several minutes. Jacob Cuffley (Smiths Falls Bears) got the crowd back into it when he scored the first goal of his college career at 4:30. Osmundson and Landrigan passed the puck around the offensive zone until they found Cuffley at the blue line whose shot lit the lamp.

A one goal lead is not enough of a cushion when second place is on the line. In an almost identical play from Friday night, while on a penalty kill, Fritz poked the puck away from a Mustang in the neutral zone. This time it was McManus who found senior captain Jarrod Fitzpatrick (Northern Cyclones) ready to fire a rocket at 16:26.

After eighteen and a half minutes of scoreless action, the Mustangs pulled Kenny (29 saves) for an extra attacker. It worked. At 18:47 Aaron Murray (Merritt Centennials) passed it to Gray, who went top shelf on a screened Baggetta (17 saves). The Pioneers were able to hold off the extra attacker for the last 73 seconds of the game to earn a 4 to 3 victory and sole possession of second place in the UCHC. For the second consecutive season, no UCHC team will sweep Utica College. The Pioneers’ 14 game win streak is the longest in DIII this season.

The Pioneers will finish their regular season when they take on Kings College at the ADK on Friday at 7pm. If Utica wins and Wilkes beats Nazareth on Friday night, their Saturday night match-up will be a “winner takes first place” game. The top two spots in the UCHC get a bye into the semi-finals and a two game home ice advantage in the playoffs.