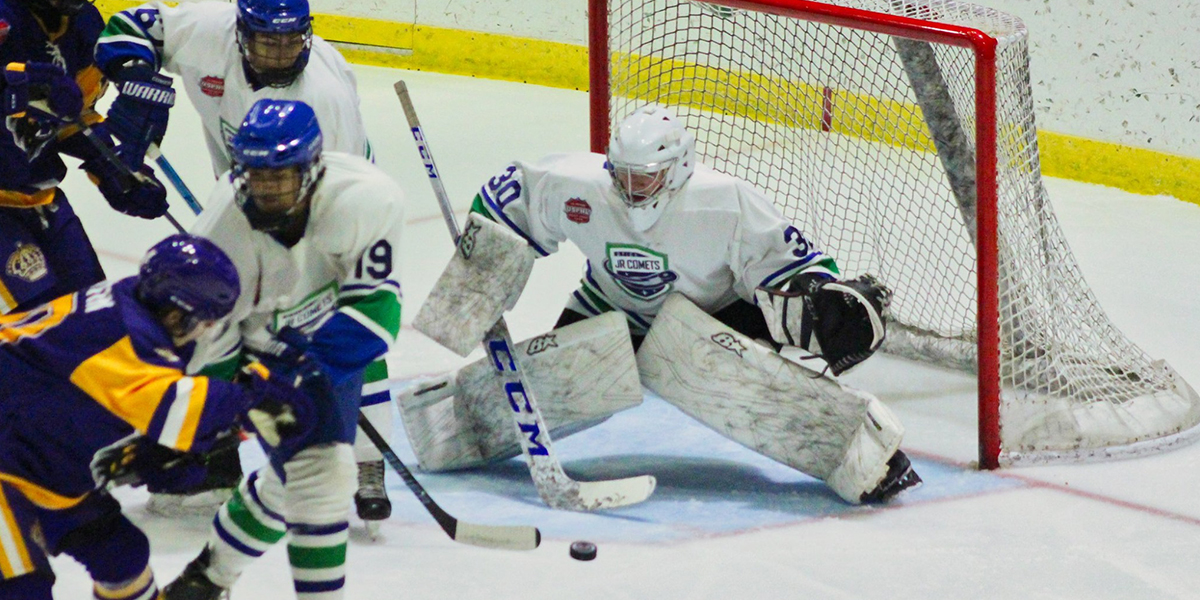 The NCDC team continued to struggle while the Premier team keeps tearing it up!

The pucks were flying in this one with a total of 86 shots on goal. Unfortunately five of those found their way behind Comets goalie Isak Johansson who finished with 41 saves in the loss.

The undefeated Hitmen were up 2-0 after the first 20 minutes. Maj Tavcar pulled Utica within one on his goal at 17:28 of the second. Assisting on the even strength goal were Lucas Kucera and Andy Antiles. Jersey went on to score three more in the third and put this one out of reach.

Utica once again found themselves down 2-0 after Jersey Hitmen goals at 1:12 and 1:36 of the period. In goal for the Comets was newcomer Tyler Bost who just joined the team after playing 2 games for Topeka in the NAHL early this season. After shaking off the nerves Bost was strong in net for the remainder of the period. Mikey Giampapa scored a power-play goal at 16:15 to bring Utica back within a goal heading into the second. Christopher-Robin Ericson and Lucas Kucera assisted on the score.

The Comets were down 3-1 heading into the third but battled back to tie the game up with goals at 6:31 and 9:42. Trevor Bollinger scored the 3-2 goal while on the power-play assisted by Donny Borgula and Radek Prosek. Borgula potted his third of the season to tie the game. Ryan Brandt and Antiles assisted.

Jersey scored 31 seconds into overtime on the first and only shot of the extra period to skate away with a 4-3 victory and keep their undefeated season intact.

Bost finished with 33 saves in his NCDC debut.

The NCDC team hosts the P.A.L Junior Islanders Saturday at 5:00pm and Sunday at 3:30pm.

The Premier team hosted the New Hampshire Jr Monarchs in a rare weekday series on Wednesday & Thursday. The Jr Monarchs are first place in the New England division while the Jr Comets are fist in the North East division.

Utica’s Josh Kalinowski got the home team out to a 1-0 lead at 7:09 of the first period. Assists on that goal went to Michal Biben and Jeff Ransom. The Monarchs tied the game 101 on a power-play at 9:11. While on a power-play of their own, Utica regained a one goal lead thanks to a Bryce Grennan tally at 17:00. Kalinowski and Tyler Morin assisted.

New Hampshire peppered Comets goalie Tripp Clarke with 22 shots in the third period as they tried even the score at two. It was Utica, however, who found the back of the net. Tyler Morin scored at 5:42 assisted by Anthony Morin and Coby Smith to seal the 3-1 victory. Clarke finished with 35 saves and remains undefeated in regulation this season. His only loss came in a shootout against the Springfield Pics.

Utica outshot the visitors in all three periods and finished with a game total of 44 shots on goal. 18 of those shots came in the first period, and not surprisingly the Comets capitalized 3 times in the first 20 minutes.

At 7:17 of the period Brennan Ash scored his first of the season assisted by Andrew Martino and Michal Biben. Just over two minutes later Mike Hererra scored with assists going to Kalinowski and John Gutt. Finally, at 16:26 Grennan scored his second power-play goal of the weekend, assisted by A. Morin and T. Morin.

Neither team found the back of the net in the second, but the Comets would add two more in the third. Morgan Clarke-Pizzo scored 1:05 into the third with assists going to Gutt and Drazen Medich. Michal Biben added the fifth Comets goal at 6:19 assisted by JD Speer and Smith.

Tripp Clarke was in net again and stopped all 31 shots en route to his first shutout of the season.

The Premier team is back home again October 5th and 6th as the P.A.L. Junior Islanders come to town. This series is their last home games until November 9th. 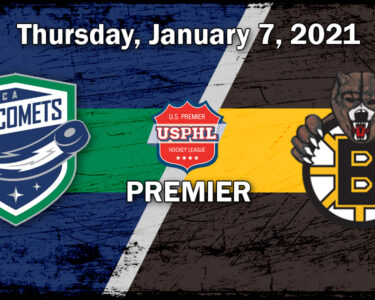