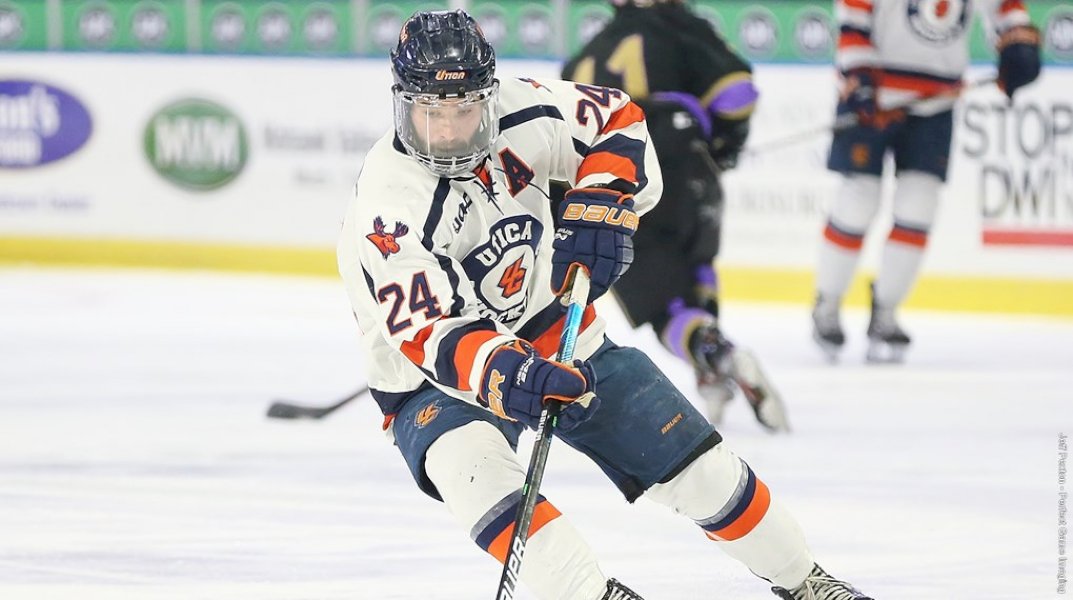 UTICA, NY – The Utica College men’s ice hockey team gets one step closer to opening regular season play on Saturday, October 23rd as it hosts SUNY Cortland in its second of two preseason contests. The Pioneers and Red Dragons are slated for a 7 p.m. puck drop at the Adirondack Bank Center at the Utica Memorial Auditorium.

Before You Go:  As it presently stands, Utica College home games will follow the same COVID-19 policies in place in the arena for Utica Comets home games at the Adirondack Bank Center at the Utica Memorial Auditorium. Fully vaccinated guests are encouraged to wear a face covering. Guests who are not fully vaccinated are required to wear a face covering when not eating or drinking. Please note that these policies may be subject to change in the future. Limited tickets may be available at the door, and are also available online at empirestatetix.com.

Follow Along: Live Video and Stats are available for all UC home games are available at portal.stretchinternet.com/utica/, and video is also available on the FREE Empire 8 app available for a multitude of streaming devices. Additionally, the game will be on local radio at WPNR 90.7 FM and PioneerRadio.org. Sports Information Assistant Ray Biggs ’13 is back for an eleventh season of play-by-play with the team and will take you through Saturday’s game.

A Sharp Start: Utica opened the pre-season with a bang by disposing of longtime national power Oswego State in a 6-4 exhibition win over the Lakers on Saturday, October 16th. The Pioneers overturned a 3-2 second period deficit with a string of four straight goals that lasted into the third period, then defused any chance of a comeback by the hosts. UC finished 4-for-8 on the power play in the game and outshot Oswego 26-23 on the road. Dante Zapata (Huntington Beach, CA/Austin Bruins (NAHL)) scored two goals to pave the way to the win, while Mic Curran (Arlington, MA/Curry College (CCC)) had four assists in his debut wearing blue and orange. John Moncovich (Wilmington, NC/Hampton Roads Whalers (USPHL)), Khristian Acosta (Port Monmouth, NJ/Mercyhurst University (NCAA DI)), Buster Larsson (Malmo, Sweden/Syracuse Stars (NCDC)), and Mattias Dal Monte (Nanaimo, BC/Amarillo Bulls (NAHL)) also scored for UC. Sean Dickson (San Francisco, CA/Hampton Roads Whalers (USPHL-Premier)) went the distance with nineteen saves to grab the win. The two sides will meet again in a regular season game at the Aud in January.

Top of the Table: Utica has been picked to repeat as regular season champion by the UCHC’s head coaches in the conference’s preseason poll released earlier this week. Utica led the way with 78 points and six first place votes. Stevenson, Wilkes, Chatham, and Lebanon Valley round out the top five.

Past History with Cortland: In nine regular season games against the Red Dragons, Utica leads the series with a 6-2-1 record. Utica won the last outing 3-0 in January of 2019. Conor Landrigan (New Tripoli, PA/Binghamton Jr. Sens (NAHL)) scored one goal, while Zach Borsoi potted the remaining two. Gianluca Baggetta recorded a shutout in goal. Utica has won the last two against Cortland.

The Graduates: With the NCAA’s eligibility guidelines concerning COVID-19, Utica is pleased to welcome back three graduate students for an additional year with the team. Forwards Jamie Bucell (Garfield Heights, OH/Philadelphia (EHL)) and Brett Everson (Mississauga, Ontario/Hawkesbury (CCHL)), and defenseman Vaden McManus (Fayetteville, NC/Hampton Roads (USPHL)) form  Bucell returns for his fifth season, and is fresh off his strongest season yet. The native of Ohio ripped United Collegiate Hockey Conference opposition to shreds during the abbreviated campaign, as he rattled off career highs in goals (8), assists(7), and points (15).  He impressively accomplished those high water marks in just ten games, and is Utica’s leading returning scorer from the 2020-21 season.  He was fourteenth in the nation at an average of 1.50 points per game on his way to a second team All-Conference selection. Everson also had himself a sharp season with thirteen points on eight goals and five assists in just nine games played. He was thirteenth in the nation in goals per game, and tied for seventh in the nation with four power play goals. McManus has 31 points in 60 career games, and had an outstanding nineteen points from the blue line during the 2019-20 season. That group has won 74 games in four years, won two UCHC postseason tournament titles, and four straight regular season championships during their tenure. With the spare year available to them, they will have the opportunity to set a new standard for wins by a single class in program history.

Juniors Ready to Roll: While the Pioneers are lucky to have an abundance of graduate-level experience, the team’s junior class features a quartet of explosive forwards. Brandon Osmundson (Virginia Beach, VA/Hampton Roads Whalers (USPHL)) and Dante Zapata (Huntington Beach, CA/Austin Bruins (NAHL)) both built off their remarkable rookie seasons with sizzling sophomore efforts, as each of them posted fourteen points on five goals and nine assists while appearing in all ten games. Osmundson now has 56 points in his first 39 games played. Buster Larsson (Malmo, Sweden/Syracuse Stars (NCDC)) and John Moncovich (Wilmington, NC/Hampton Roads Whalers (USPHL)) weren’t far behind their classmates last season, as Larsson had six goals and seven assists for 13 points, and Moncovich had twelve points on five goals and seven assists. Larsson and Moncovich were two of the five players on the team last season with multiple power play goals.

The Cavanagh File: When senior forward Regen Cavanagh (Chesapeake, VA/Sioux Falls Stampede (USHL)) is at the top of his game, he can make a huge difference for the Pioneers. He was one of nine skaters averaging a point a game or better for Utica in the shortened ten-game season last year, and had a goal and nine assists. In 53 games, he has performed at a reliable clip with 44 points on 19 goals and 25 assists. During the team’s magical 2019-20 season that saw the program win 25 games for the first time, he was responsible for the game-winning goal in five of those games.

The Transfer of Power: The Pioneers will be bolstered by a faction of four transfer students this season, including one of Division III’s best skaters and two others with Division I experience. Forward Mic Curran (Arlington, MA/Curry College (CCC)) could be the most interesting prospect of the bunch as he joins the team from Division III Curry College. During a five-game junior season, he led the Colonels with seven points. During the 2019-20 campaign, he was as good as it gets nationally in Division III, with a team-high 46 points on his way to being named to the Commonwealth Coast Conference first team. He was fifth in the nation with 1.77 points per game, and has compiled 70 points in his first 52 career games. Forward Khristian Acosta (Port Monmouth, NJ/Mercyhurst University (NCAA DI)) checks in from Division I Mercyhurst, and had nine points in 33 games over two seasons with the Lakers. He had two seasons with 20 points or more with the USHL’s Tri-City Storm. Defenseman Brian Scoville (Agawam, MA/Alabama-Huntsville (NCAA DI)) joins the Pioneers after playing in all 22 games as a freshman with the now-dormant Division I program at Alabama-Huntsville. Also set to play in his first season with the team is goaltender Louis-Felix St. Jean (Montreal, Quebec/Salve Regina (CCC)), who transferred last Fall from Salve Regina, but sat out the shortened Spring season. He started 16 games for the Seahawks during his time there.

The Battle in Net: Senior Sean Dickson (San Francisco, CA/Hampton Roads Whalers (USPHL-Premier)) enters preseason camp as the man to beat between the pipes after a spectacular spring. In his first season as the full-time starter, Dickson swatted away 96.2 percent of opposing shots, had a GAA of just 0.75, and had a school single-season record four shutouts on his way to a 6-2 record. He was second nationally in goals allowed average, third in save percentage, and tied for the national lead in shutouts. He was named second team All-Conference, and will be looking to maintain his established high ground against the talented newcomers St. Jean and Landsberger as camp progresses. The new duo possesses tremendous height, with St. Jean standing at 6’5, and Landsberger at 6’6.

Averages That Are Anything But: Utica led the nation last year in scoring offense at an average of 5.90 goals per game. The Pioneers had nine players in the top 100 nationally in points per game. The team has been either first or second in the nation in goals per game in three of the last four seasons. Fueling that effort was an impressive power play that clicked at a Division III-best 39.1 percent. On the defensive end, Utica was sixth nationally this spring with an average of 1.80 goals per game allowed. The Pioneers were 18th on the penalty kill.

Up Next: Utica opens the regular season with a two-game set against Adrian on Saturday, October 30th, and Sunday, October 31st, in what is sure to be a battle between nationally-ranked teams. The preseason USCHO poll has yet to come out. Game times are 5 p.m. on Saturday, and 3 p.m. on Sunday.