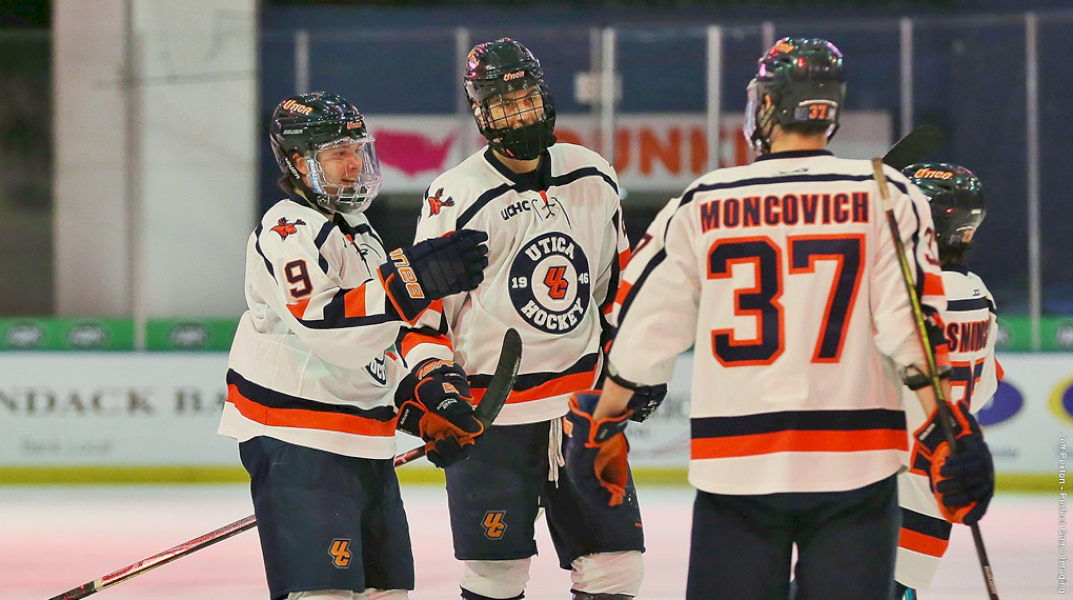 NYSCOPBA Halloween Night: Sunday’s game is on Halloween, and UC Men’s Hockey and NYSCOPBA want to celebrate in a fun and safe way with fans. All children dressed in costume will receive free admission on Sunday, and the Theta Phi Alpha sorority will hand out candy at the game.

Follow Along: Live Video and Stats are available for all UC home games are available at portal.stretchinternet.com/utica/, and video is also available on the FREE Empire 8 app available for a multitude of streaming devices. Additionally, the games will be on local radio at WPNR 90.7 FM and PioneerRadio.org. Sports Information Assistant Ray Biggs ’13 is back for an eleventh season of play-by-play with the team and will take you through both games.

The Series: This weekend will mark the sixth and seventh matchups with Adrian all-time. All seven meetings will have taken place within a four season window from the 2017-18 season to this weekend. Adrian leads the series 3-2, but Utica notably won the last two in an incredible weekend sweep in January of 2020. The Pioneers won the first game in a 7-6 barn burner in overtime, and erased a 3-0 deficit to force overtime en route to a 4-3 win the following day. That weekend, Regen Cavanagh (Chesapeake, VA/Sioux Falls Stampede (USHL)) had three goals including both overtime game-winners. The wins were a key launching point to a perfect second half of the season as Utica won 20 straight games en route to the conference title. Brandon Osmundson (Virginia Beach, VA/Hampton Roads Whalers (USPHL)) had a four point weekend for the Pioneers. Adrian won the first three meetings, including both to take place at the Aud at the start of the 2018-19 season.

Please Note: There was no USCHO pre-season poll for the 2021-22 season. The poll will return on Monday afternoon next week. In the most recent edition conducted in March 2020, Utica was third and Adrian was fifth.

Going for the Big One: Head Coach Gary Heenan and the Pioneers currently sit at 298 wins over the life of the program. A sweep this weekend puts the Pioneers and their only head coach at the 300 win mark. Heenan, the 2020 USCHO Division III National Coach of the Year, would become just the 93rd men’s ice hockey coach in any division of the NCAA to reach 300 wins. He is also just six wins away from tying his college coach and mentor, Phil Grady, who has 304 wins.

A Clean Sweep: Utica polished off a pair of preseason wins against opponents from the SUNYAC heading into this year’s season opener. The Pioneers opened up preseason play with a 6-4 win at Oswego. Mic Curran (Arlington, MA/Curry College (CCC)) had four assists while Utica’s power play finished 4-for-8. UC then returned home to defeat Cortland by a 5-1 score. Five different Pioneers scored, including a one goal, one assist effort by Justin Allen (Hilton, NY/Rochester Monarchs (USPHL-NCDC)). Regen Cavanagh (Chesapeake, VA/Sioux Falls Stampede (USHL)) scored a goal on a team-best five shots. Utica out-shot the Red Dragons 30-22 and were 1-for-8 on the power play. The Red Dragons were 0-for-6 with the man advantage. Louis-Felix St. Jean (Montreal, Quebec/Salve Regina (CCC)) and Bryan Landsberger (Montreal, Quebec/Nepean Raiders (CCHL)) combined to get the win in goal with 21 saves.

Locked and Loaded: Utica returns thirteen of its top fourteen scorers from last season as part of the nation’s highest scoring 2020-21 offense at 5.90 goals per game. Graduate student Jamie Bucell (Garfield Heights, OH/Philadelphia (EHL)) is the team’s highest scoring returner. He rattled off career highs in goals (8), assists(7), and points (15). He was fourteenth in the nation at an average of 1.50 points per game on his way to a second team All-Conference selection. Juniors Brandon Osmundson (Virginia Beach, VA/Hampton Roads Whalers (USPHL)) and Dante Zapata (Huntington Beach, CA/Austin Bruins (NAHL)) were tied for second amongst returners with fourteen points on five goals and nine assists each. Osmundson now has 56 points in his first 39 games played. He was the 2020 USCHO National Rookie of the Year. Graduate student Brett Everson (Mississauga, Ontario/Hawkesbury (CCHL)) and junior Buster Larsson (Malmo, Sweden/Syracuse Stars (NCDC)) had thirteen points each, with Everson recording 8 of his 20 career goals this Spring. Utica had nine players at a point per game or better, including graduated All-American forward Conor Landrigan (New Tripoli, PA/Binghamton Jr. Sens (NAHL)).

Defense to Offense: Defensemen Justin Allen (Hilton, NY/Rochester Monarchs (USPHL-NCDC)) and Joey Berkopec (Hamilton, Ontario/Coquitlam Express (BCHL)) had outstanding offensive outings in Utica’s 5-1 exhibition win over Cortland. Both of them had a multi-point outing, with Allen notching a goal and an assist, and Berkopec logging two assists. For Allen, it’s the continuation of an already sparkling career and a tremendous Spring season earlier this year. He was the team’s top scoring defenseman with eleven assists in ten games on his way to First Team All-Conference honors. He was eleventh among all skaters nationally in assists per game, and seventh in points per game amongst defensemen. With Allen leading the way, the Pioneers led the UCHC in scoring defense at 1.80 goals allowed per game. He has not missed a game in his time at Utica. Berkopec had just one assist in 10 games last season.

Options in Goal: Utica has no shortage of options concerning its goaltending for this upcoming weekend. Returning starter Sean Dickson (San Francisco, CA/Hampton Roads Whalers (USPHL-Premier)) is coming off a season in which he recorded a program-record four shutouts, which also led the nation. Louis-Felix St. Jean (Montreal, Quebec/Salve Regina (CCC)) did not play last season. In the 2019-20 season, he was 8-8 with a Goals Allowed Average of 3.12, and a save percentage of 91 percent for a team that was very offense-oriented. Bryan Landsberger (Montreal, Quebec/Nepean Raiders (CCHL)) won nineteen games between the Dauphin Kings and Ottawa Junior Senators organizations during the 2019-20 season. He stands as the tallest goaltender in program history at 6’6.

About Adrian: The Bulldogs played the longest schedule in Division III last season at 23 games. They were 16-6-1, and were 16-2-1 when playing Division III competition. With limited scheduling options last Fall, Adrian played four games against Division I opposition with weekends against Lake Superior State and Bowling Green. Adrian’s season ended with a 3-3, 1-3 series loss to the Milwaukee School of Engineering in the NCHA Semifinals. Junior Alessio Luciani had 36 points on 14 goals and 22 assists to lead the team offensively. Rex Moe and Andrew Bellant had 27 points apiece, and both players return this season. They averaged 4.35 goals per game and had a conversion rate of 23.7 percent on the power play while outscoring opponents 100-53. In goal, starter Cameron Gray returns after logging a 12-5-1 record and tying for the national lead alongside Sean Dickson (San Francisco, CA/Hampton Roads Whalers (USPHL-Premier)) with four shutouts.