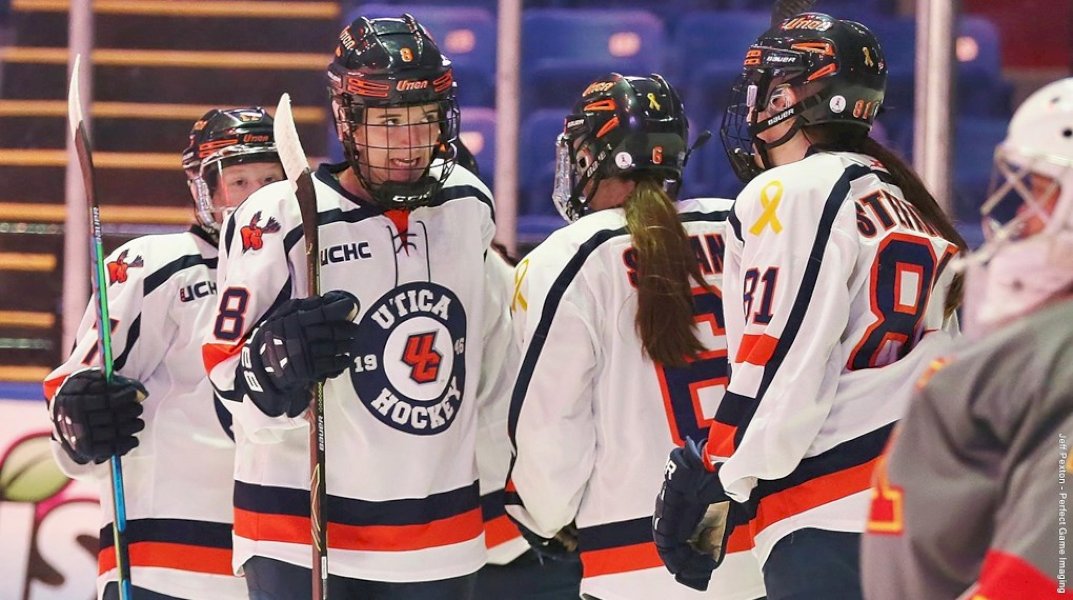 UTICA, NY – The Utica College women’s hockey team will embark on its longest road trip of the season against the Stevenson University Mustangs in a weekend series. Friday’s game will faceoff at 7 p.m. while Saturday’s game will start at 3 p.m.

Last Time Out: Utica is coming off another weekend sweep, this time over King’s College, downing the Monarchs 13-0 on November 12 and 5-0 on November 13. A total 11 different players found the back of the net in the first game, highlighted by a five-point outing by Georgiana Santullo (Woburn, MA/Boston Shamrocks/Woburn High School) (three goals, one assist), and a breakout four-assist game by freshman Callie McLaughlin (Centerport, NY/New Hampton School).  The Pioneers followed the first meeting up with a 5-0 victory the following day off of goals by Santullo, Abby Lillis (West Seneca, NY/Buffalo Bisons), Alexa Carlon (Lakewood, NY/Niagara Jr. Purple Eagles), and Erica Sloan (Potsdam, NY/St. Lawrence Steel).

Going for Seconds: Another week, another UCHC Player of the Week award for Santullo after a monstrous eight-point weekend against the Monarchs of King’s College. Santullo is currently on pace to have the most goals in UC program history as she leads not only the team, but the nation with 2.2 goals per game. Ranked second in the nation in points per game with 3.4, Santullo already has three hat tricks through the early goings of the season. To put Santullo’s astonishing start into perspective, the rest of the UCHC has just one hat trick combined which came from Morgan Miller of Manhattanville.

Shutout Times Four: The Pioneers have not allowed a goal in the last 263 minutes and 40 seconds of game time, outscoring opponents 35-0 in that stretch. Angela Hawthorne (Santa Clara, CA/Meijer), Savannah Gutierrez (Huntington Beach, CA/Anaheim Lady Ducks), and Maddie Esposito (Ashburn, VA/Boston Shamrocks) all have contributed in goal as Utica ranks fourth in the nation with four shutouts. So far, Hawthorne and Esposito have yet to allow a goal while Hawthorne’s efforts have allowed her to sit atop the national ranking tied for first with a 1.000 save percentage off of 32 saves.

Pass the Puck: UC sits second in the nation with 63 team assists. There have been 21 different members of the team that have registered an assist as well. The biggest playmaker is Sloan who leads the team with eight assists. Already tying her single season high achieved in both Freshman and Sophomore year, Sloan ranks sixth in the NCAA and first in the UCHC with 1.6 assists per game. Following suit, the Pioneers have five players (Santullo, Stefanini, Callie McLaughlin (Centerport, NY/New Hampton School), Maggie Rylott (Cobourg, Ontario/West Northumberland)) ranked in the top 50 for assists per game.

Meeting History: This weekend will mark the ninth and tenth times the two teams have met with UC currently leading the all-time series 4-2-2. The last time they squared off was February 2020 when the teams battled back-and-forth in what turned out to be a deadlock. In the 4-4 tie that couldn’t be decided in overtime, the Pioneers out-shot the Mustangs 37-25. Lexi Stanisewski (Lawrence, MA/Boston Shamrocks) led the charge for Utica with two goals while Carolyn Whitney (Raleigh, NC/Milbrook School) was able to knock in another one while also dishing an assist. Additionally, Santullo, Sloan, Lillis and Sirena Fitzery (Hamburg, NY/Buffalo Bisons) were able to put one in the assist column.

Scouting the Mustangs: The Mustangs (2-2, 2-0 UCHC) enter this matchup coming off of a pair of wins over Neumann. Leading the charge for the Mustangs is their two-headed monster at forward, Trinity Barcless and Karly Aguirre. Both players have scored a goal twice this season with Barcless also leading the team in assists with three. Anchoring the defense will be one of two netminders fighting for the starting spot. Olivia DeGuire (2.89 goals allowed per game on a 88.2 save percentage) and Ainsley King (5.78 goals allowed per game with an 84.3 save percentage) have shared time in goal for the Mustangs this season. Regardless of who plays between the two, they will share a common goal of slowing down the potent Utica offense.

Up Next: Following this matchup, the Pioneers will continue their six-game road trip with a brief matchup against Hamilton College at 3 p.m. on Sunday, November 28.