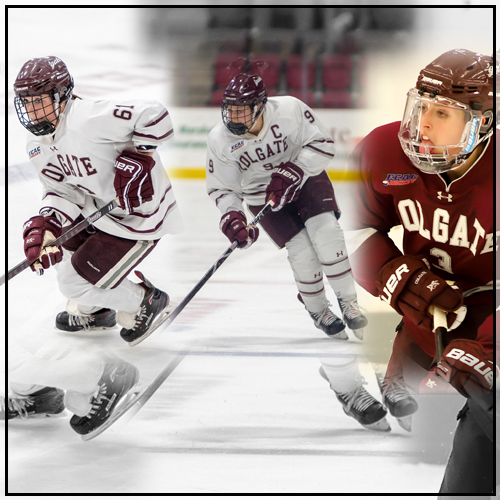 The National Women’s Hockey League just wrapped up their 2018 draft. Rounds one and two of the draft were Wednesday afternoon while three through five wrapped up the draft Thursday.

In the second round, 10th overall, the Boston Pride selected Colgate University senior forward Bailey Larson. Larson has accumulated 5 goals and 8 assists through 18 games so far this season. She is currently a career 0.79 points per game player with a total of 105 points in 133 games over her Colgate career. Larson had this to say about being drafted:

“This is something I’ve always dreamed about. When I was asked what I was going to be when I grew up in kindergarten I said a professional hockey player, and it’s indescribable that I have the chance to.” -Bailey Larson pic.twitter.com/l2gBOeh3En

Larson wasn’t the only Raider to be drafted this year, although she was the only one to go in the first two rounds. During round 3 on Thursday the Buffalo Beauts selected forward Jessie Eldridge 13th overall. Eldridge is a senior captain at Colgate and has scored 57 goals and 75 assists good for 132 points in her 133 game career thus far.

“I'm honored to be drafted by the @BuffaloBeauts and so excited to see what the future holds. I would like to thank the people who have worked tremendously hard to grow the women's game, which has allowed my dream of being drafted to a pro league become a reality." -Eldridge pic.twitter.com/aWxRzre3GV

Finally, in the fourth round Buffalo also selected Olivia Zafuto 18th overall. Zafuto is a defender from Niagara Falls, NY who has recorded 82 points through her 131 game career with Colgate.

“It’ll be awesome to compete against some of the best players in the world. Having the opportunity to play at such a high level is really exciting. Seeing how far the NWHL has come since it started, it’s cool to be a part of it and continue to grow the game.” -Zafuto pic.twitter.com/hnizmukG4i

Eldridge and Zafuto will be joining former Colgate forward, and New Hartford native, Annika Zalewski who is playing her first year with the Beauts. Zalewski has 1 goal and 4 assists in 7 games this season.

Colgate is currently on holiday break. Their next game is January 5, 2019 at Mercyhurst.