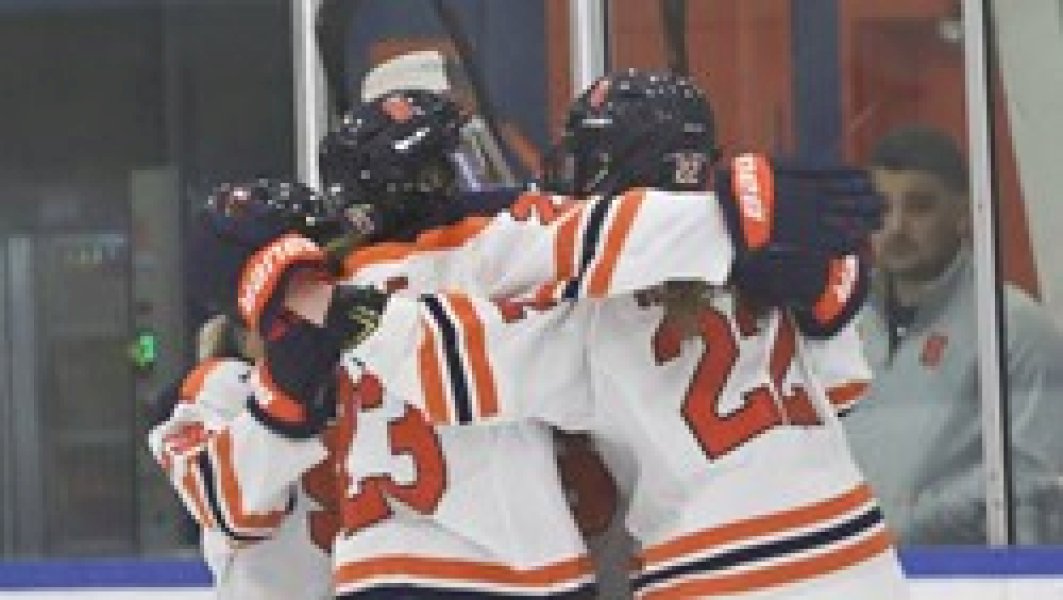 Junior Sarah Thompson scored her first collegiate hat trick and had four points in Syracuse’s 10-0 win against Post University on Friday at Tennity Ice Pavilion. The Ottawa, Ontario native scored one goal in each period and tallied her assist in the third period.

Sophomores Madison Primeau and Erin Brousseau each had three points for the Orange (6-9=-1 overall, 4-0 College Hockey America). Primeau netted two goals and had an assist, while Brousseau scored her first collegiate goal and had the first two assists of her career. Defensemen Hannah Johnson and Maya D’Arcy each contributed three assists. Syracuse and Post will play the second game of the series on Saturday at 2 pm at Tennity Ice Pavilion.

“Our focus was 60 consistent minutes and I felt that each period we definitely kept to our game and making sure we were playing the right way, which is important to us,” said head coach Britni Smith. “Tomorrow same game, same hockey, making sure we are coming back for another 60 minutes. We celebrate the firsts tonight with Sarah’s hat trick, Erin and Gabby scoring their first collegiate goals, and Ari getting her first career shutout. They are all big things. The team being very happy for each other’s success and understanding that our individual success comes from team success are important. Playing the right way as a team is what provided those people with the opportunity.”

Syracuse jumped out to a 2-0 lead in the first six minutes. Primeau scored at the 1:15 mark when she took a rebound save and buried it in the back of the net. Brousseau set up the goal with a shot on goal which Post (1-12, 1-8 NEWHA) goalie Hannah Saunders knocked aside. The assist was the sophomore’s first career point. Four minutes later, Thompson put the Orange up 2-0 when she scored on a rebound shot. Primeau and D’Arcy assisted on the goal.

Brousseau and freshman Gabby Dougherty scored their first collegiate goals to put Syracuse ahead 4-0. Brousseau scored with 8:13 remaining in the first period, on an assist from D’Arcy, and then Dougherty fired a shot from the blue line into the back of the net for the 4-0 advantage. Freshmen Charlotte Hallett and Heidi Knoll assisted on Dougherty’s goal.

Primeau closed the scoring in the opening period taking a pass from Brousseau in the left circle and sending it into the back of the net with 42 seconds remaining to put the Orange ahead 5-0.

In the second period, Thompson scored her second goal of the game tipping the puck past Saunders for a 6-0 Syracuse advantage. Johnson and Kambel Beacom assisted on the play. Forward Sarah Marchand gave the Orange a 7-0 lead when she gathered a pass from Mae Batherson just across the blue line and took it in for the score with 11:26 remaining in the second period.

Four minutes later freshman Rhea Hicks made it 8-0 Syracuse when graduate student Lauren Bellefontaine fed a pass from the left side to Hicks as she came down the center of the ice and one-timed the puck into the net.

Junior Rayla Clemsons scored her second short-handed goal of the season to make the score 9-0 just more than two minutes into the third period. Thompson won a faceoff in the Orange defensive zone getting the puck to Johnson who sent a pass to Clemons at mid-ice and then Clemons beat all skaters down the ice for the score. Thompson completed the hat trick with less than 10 minutes remaining in the game on a shot from the left circle. Johnson and D’Arcy assisted on the play.