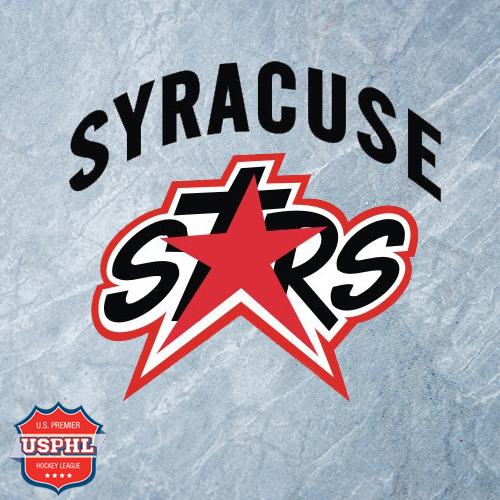 The Syracuse Stars NCDC and Premier teams kicked off their respective seasons over the weekend with back-to-back home games Saturday and Sunday. The NCDC team split the weekend with the Northern Cyclones. The Premier team didn’t fare as well and dropped two games to the New Hampshire Jr. Monarchs.

The Cyclones went ahead 1-0 on a goal scored by Eduard Malakyan 8:06 into the opening frame. It took only eight seconds for the Stars to respond as Dylan Rallis tied the game up with assists from Griffen Sanom and Cole Gibbs. The rest of the period was all Syracuse and they would head to the intermission up 3-1 behind additional goals from Mathieu Gervais and Blake Tosto.

All of the games eight penalties came in the middle stanza. These penalties included matching roughing minors to start the period and another set as the horn sounded. Gervais added his second of the night in the third period to secure the win in their debut at the Adirondack Bank Center.

The Cyclones came out flying Sunday afternoon and Jake Sutton got his team on the board just 46 seconds into the game. Goals from Kevin Sadovski and Matt Gruber would give the Cyclones a commanding 3-0 lead heading into the first intermission. The second period saw the exact opposite happen with Griffen Sanom scoring just 23 seconds in to cut the Cyclones lead to two. Dominik Bogdziul and Everett Wade would add two more to even things up at three. Soon after a Cyclones time-out David Hill would regain the lead for the Cyclones and they didn’t look back. They went on to score four more goals and the 8-3 win over Syracuse.

Unfortuantely, there isn’t much to say about the Premier team. They were walloped 6-2 and 7-0 by the New Hampshire Jr. Monarchs over the weekend. Henry Froass and Tyler Knicley scored the only two goals on the weekend.

The NCDC travels to Marlborough, MA to participate in the Junior Bruins Shootout where they will play against the New Hampshire Jr. Monarchs, Junior Bruins and New Jersey Rockets.

Next up for the Premier team is the Connecticut Jr Rangers back at the ADK Center September 29th and 30th.