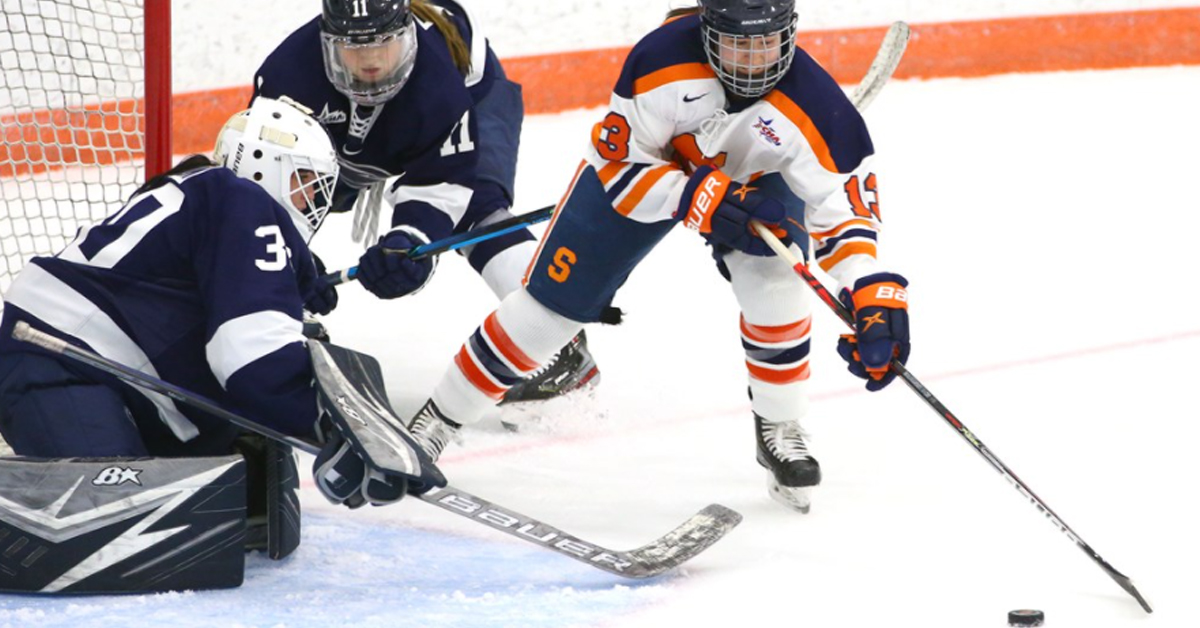 The Syracuse Orange Women’s Hockey team was looking to turn the tables this weekend against the Penn State Nittany Lions at Tennity Ice Pavilion. The two teams played last weekend and the Nittany Lions came out on top 2-1 Saturday, December 5th before the teams skated to a 2-2 tie on Sunday, December 6th.

In the second consecutive overtime game between the teams, Penn State emerged with the 4-3 victory. The Nittany Lions opened the scoring late in the first period before Syracuse scored three unanswered to take a 3-1 lead into the third period. Abby Moloughney scored at 6:09 and 18:03 of the second with a Jessica DiGirolamo goal in the middle at 13:38.

Penn State came out in the third scoring at 0:44 and 9:30 to tie the game at three all. Penn State had a chance to end the game in regulation when they were awarded penalty shot with two minutes left. Allison Small thwarted the opportunity to make one of her 32 saves on the evening. Unfortunately in the overtime period Penn State found the back of the net at the 3:47 mark to earn the win.

Penn State once again jumped out to a 1-0 lead in the first period, but Sarah Thompson responded a minute and a half later tying the game at one. Emma Polaski and Victoria Klimek picked up assists on the tying goal. The teams traded goals once again in the second period. Moloughney scored her third of the weekend to even the score 2-2 with help from Anna Leschyshyn and Lauren Bellefontaine.

The third period was all Syracuse as they scored twice to secure the 4-2 victory. Polaski scored at the 4:02 mark before Klimek secured the victory with an empty net goal as time wound down.

Allison Small finished the game with 34 saves. Small has now amassed 828 career saves which moves her into fifth all-time among Orange goaltenders. Her save percentage of .917 currently ranks second in Orange history behind Kallie Billadeau’s save percentage of .918. Billadeau played for the Orange between 2010 and 2014.

Syracuse is now on break until after the holidays. With the ongoing pandemic they are not currently any games scheduled.