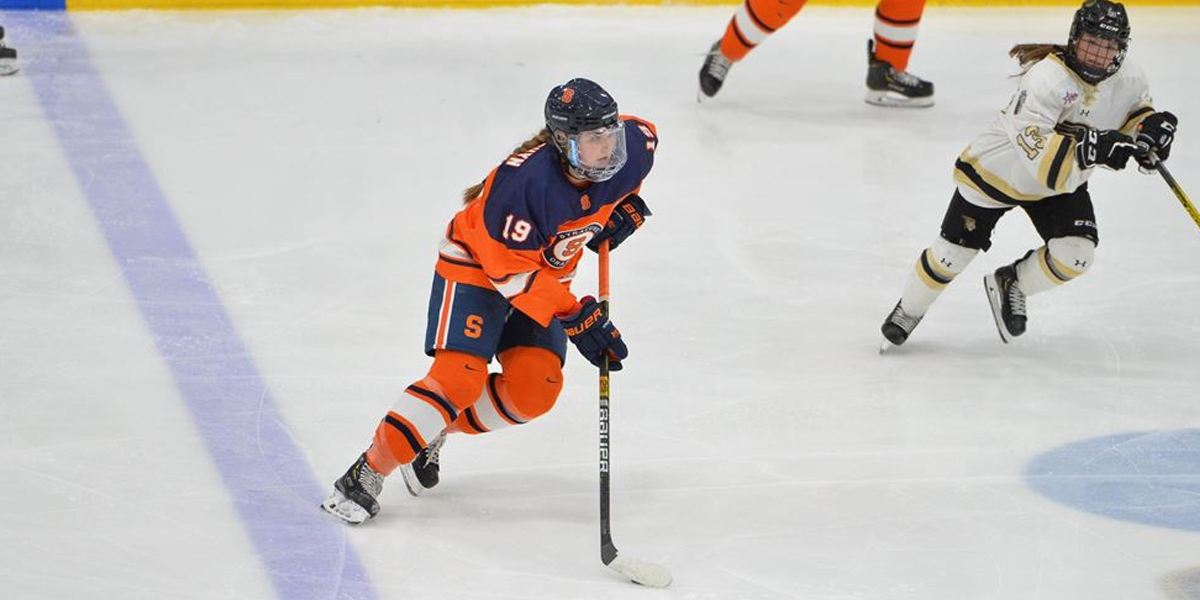 And with that win, Syracuse now has 100 conference victories! 🍊🏒 pic.twitter.com/7r7QI3ZPAY

The Orange opened the scoring just two minutes into the game when Jessica Digirolamo scored on a shot from the right point. The 1-0 lead was doubled thanks to a Shelby Calof goal at the 8:06 mark of the period. Digiroloamo added her second of the period while on the power-play at 12:15. Emma Polaski capped off the first period scoring at 14:28 giving the Orange a 4-0 lead after twenty minutes of play.

Koocher scored her first career goal at 18:37 of the second assisted by Lindsay Eastwood and Calof. Anna Leschyshyn scored a buzzer beater with one second remaining to give Syracuse a comfortable 6-0 lead heading into the final period. Koocher added another goal midway through the period.

Syracuse picked right up where they left off the night prior in a 13-1 route of Lindenwood. Eleven different players scored for the Orange who improved to 4-1-1 in the College Hockey America Conference.

Kelli Rowswell began the onslaught at 11:05 of the first period and the flood gates immediately opened. Lauren Bellefontaine scored at 13:23 to double the lead to 2-0.

There were seven goals scored in the second period including two power-play goals and one short-handed. Eastwood (PP) and Bellefontaine scored at 6:08 and 7:55 (SH) before Leschysyn made it 5-0 with another power-play goal. Other goals were scored by Victoria Klimek, Calof, Koocher, and a second from Leschyshyn.

The third period began with Syracuse ahead 9-0. At 6:18 Abby Moloughney scored to increase the lead to double digits. Madison Beishuizen scored at the ten minute mark assisted by Mae Batherson and Digirolamo. Lindenwood spoiled the shutout for Ady Cohen at 14:58 when they scored to make it 11-1. Cohen finished with 13 saves.

Polaski and Amanda Backebo added third period goals for the 13-1 final. Lindenwood was forced to dress freshman forward Madilynn Hickey in goal due to a string of injuries to the teams goaltenders. She made 32 stops in the effort.

The Orange are now off for a month and return to action on Tuesday, January 7th when St. Lawrence comes to town.