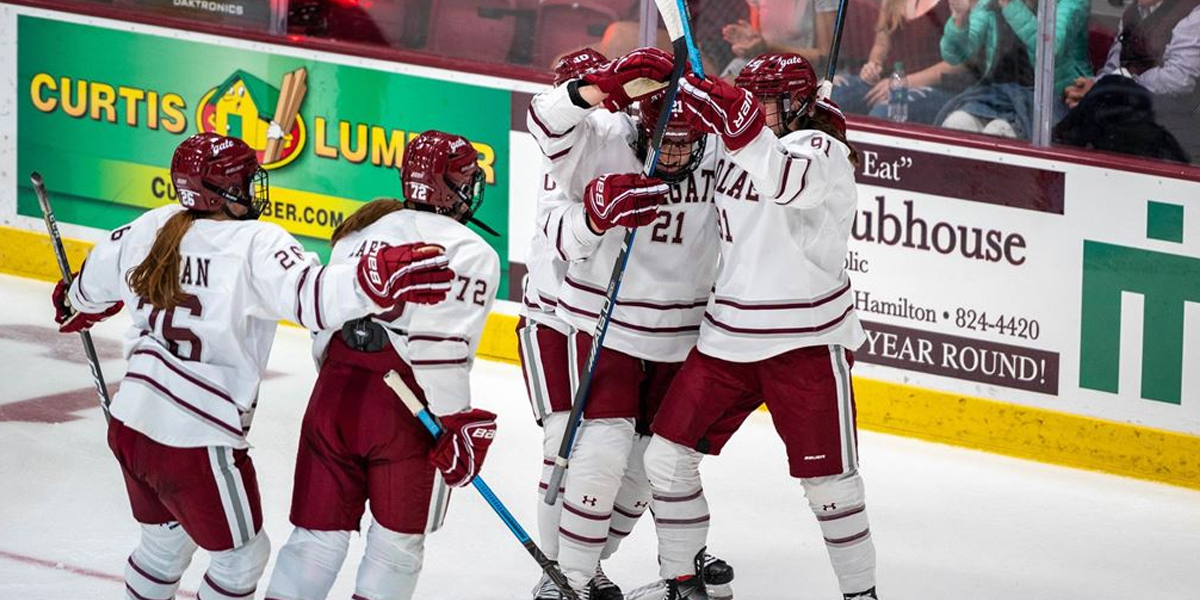 Colgate won their third straight game to open the Ice Breaker tournament in Buffalo, NY Friday night. Only five minutes into the game Sydney Bard (New Hartford) set up Kendall Williamson for her first goal of the season. The assist was the first collegiate point for Bard. Allyson Simpson scored a power-play goal at 12:28 to double the Raiders lead. Maggie MacEachern and Danielle Serdachny assisted.

The one timer by Allyson Simpson in the first that gave us a 2-0 lead!#WePlayFree #GoGate pic.twitter.com/n5Bk6KTtjR

The Huskies scored only 30 seconds into the second to make it a 2-1 game, but Darcie Lappan regained the 2 goal Raiders lead before the break. Malia Schneider scored another power-play goal 9:28 into the third to help Colgate pull away. Eleri MacKay scored an empty netter before Serdachny added one more before the final buzzer. Colgate senior Liz Auby finished with 23 saves for her fifth win of the season.

Colgate advanced to the Ice Breaker Championship game against Minnesota-Duluth who defeated Mercyhurst.

The Raiders fell 3-1 to place 2nd in the Ice Breaker tournament in Buffalo, NY. Colgate had several first period opportunities, but it was the Bulldogs who scored the only goal of the period. Duluth continued to add to their shot advantage in the second period and scored another goal taking a 2-0 lead into the final period of the championship game.

Darcie Lappan finally got Colgate on the board at the 10:44 mark. Sammy Smigliani skated out from behind the net and slid the puck across the low slot to Lappan who one-timed the puck home pulling the Raiders within a goal. Minnesota Duluth added an insurance goal with a shorthanded empty netter late in the period. Colgate goaltender Liz Auby finished with 24 saves.

Following the conclusion of the game Smigliani and Simpson were named to the all-tournament team.

Colgate hosts a pair of ECAC conference games this weekend. The Princeton Tigers will be in town Friday evening (6:00pm) followed by Quinnipiac Saturday afternoon at 3:00pm.