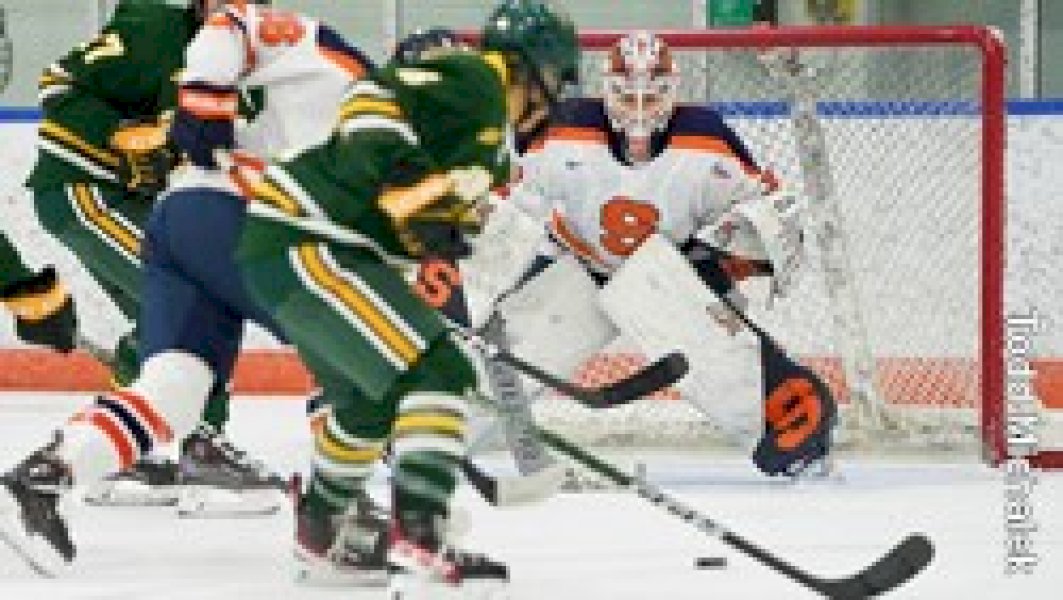 Syracuse lost to #11 Clarkson, 5-2, in the first game of a home-and-home series on Thursday at Tennity Ice Pavilion. The Orange capitalized on special teams for the second game in a row, scoring a shorthanded goal and a power play goal.

“Special teams is an area we have really been focusing on,” said head coach Britni Smith. “That is an area where you can win games, or you can lose games, so that has been a huge focus in practice. It is nice to see that we are seeing that result in-game.”

Syracuse goaltender Arielle DeSmet moved into the fourth spot on Syracuse’s career saves record list with 20 saves in the game. She has 1,582 since 2018-19. Orange goalie Jenesica Drinkwater (2010-14) was fourth with 1,573 stops.

Clarkson scored a pair of goals in the first period to take a 2-0 lead into the intermission and then scored again in the second period to open a 3-0 advantage. Syracuse’s special teams sparked its offense when junior Tatum White scored to cut the Clarkson lead to two, 3-1, on a shorthanded goal at the 7:46 mark in the second period. Freshman Maya D’Arcy cleared the puck from the Syracuse zone to Lauren Bellefontaine at mid-ice and the forward took the puck up the left side before feeding White who was streaking down the right side for the goal. The goal is Syracuse’s second shorthanded tally in the past two games and the assist was D’Arcy’s first collegiate point.

In the third period, after the Knights Gretchen Branton extended Clarkson’s lead to three, 4-1, with just more than six minutes left in the game, Syracuse junior Sarah Thompson scored a power play goal, on assists from sophomore Sarah Marchand and Bellefontaine, to make the score 4-2. Bellefontaine fed a pass to Marchand in front of the net that bounced out to Thompson who put the puck into the back of the net. Bellefontaine’s two assists give her 85 career points, which ties for 10th on Syracuse’s career scoring list. She has 30 goals and 55 assists in an Orange uniform. Julie Rising had 85 points in her Syracuse career from 2008 through 2011.

Clarkson scored an empty net goal with 11 seconds remaining for the 5-2 final.

The teams will play the second game of the series in Potsdam on Friday, October 14th at Cheel Arena (ESPN+).