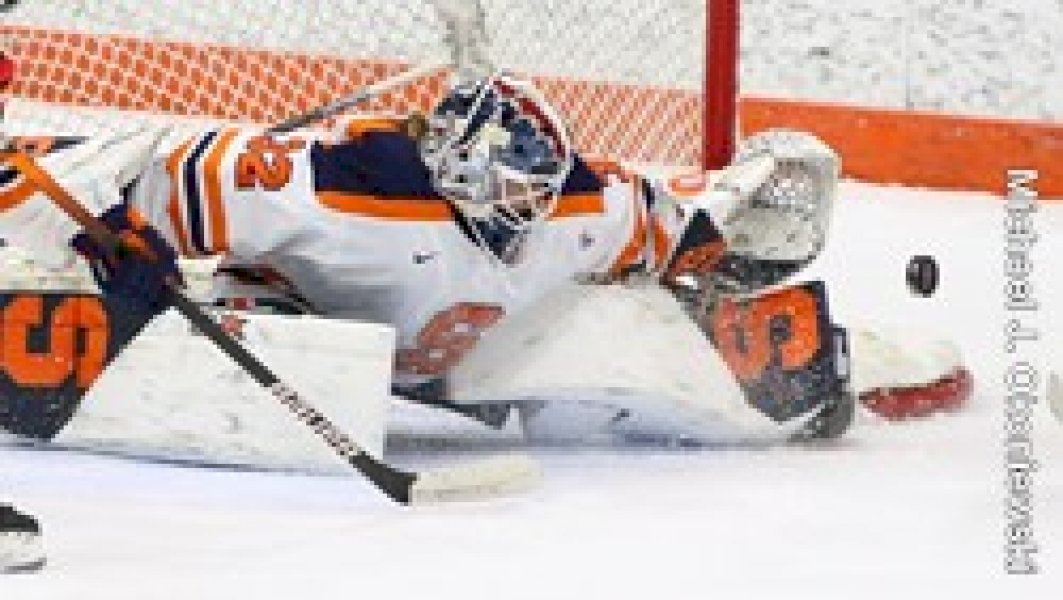 The 2022 College Hockey America regular season champions Syracuse Orange will host the 2022 CHA Championship from February 24 to 26 at Tennity Ice Pavilion. The #1 seed Orange will play the winner of the quarterfinal game between fourth-seed Lindenwood and fifth-seed RIT on Friday at 12 pm. The game will be streamed on Stretch.

Tickets for the 2022 CHA Championship can be purchased on game days at the Tennity Ice Pavilion box office. Daily tickets are $10 for adults and $5 for children and students. Parking is available, free of charge, in the lots around Tennity Ice Pavilion, including the Softball Stadium Lot, 621 North Skytop Lot and 621 South Skytop Lot.

DiGirolamo is a two-time CHA First Team selection and was also named to the all-rookie team in 2017-18. The defenseman from Mississauga, Ontario led the Orange and ranked third in the CHA in blocked shots (65) and recorded 16 points (six goals and 10 assists). DiGirolamo owns the Syracuse career records for points, goals and assists by a defenseman. During the season she earned three CHA Defenseman of the Month awards, was the CHA Defenseman of the Week five times, and earned a spot on the Battle at the Burgh All-Tournament Team.

A native of Charlotte, Vt., DeSmet earned CHA First Team honors. She posted a .939 save percentage, which is second on the Syracuse single-season record list, and recorded a 2.01 goals against average, which ranks fourth on the Orange single-season record ledger. She tallied a career-high 54 saves at Penn State, which is second on the Syracuse single-game record list and had four games with more than 40 saves. She was named Battle at the Burgh Most Valuable Player and earned All-Tournament Team honors.

Moloughney is a four-time All-College Hockey America postseason honoree. The Ottawa, Ontario native earned all-rookie team honors in 2018-19, first team honors in 2019-20 and second team honors last season. She forward earned 2021-22 CHA Second Team honors after leading the Orange in scoring with 28 points (13 goals and 15 assists). The forward tallied her 100th career point at Penn State, becoming the fourth member of the Syracuse 100 Point Club. Moloughney was named to the Battle at the Burgh All-Tournament Team.

A fourth-year forward, Bellefontaine earned CHA Second Team honors. In 2021-22 she ranked 12th nationally and third in the CHA with 373 faceoff wins. She ranked ninth in the CHA with 22 points (eight goals and 14 assists). The Kemptville, Ontario native had seven multi-point games, including three with two assists. She earned the CHA Forward of the Month Award in January. Bellefontaine was a 2018-19 CHA All-Rookie selection.

Marchand garnered a spot on the CHA All-Rookie Team after finishing eighth in the CHA in scoring with 24 points (nine goals and 15 assists). She tied for the Syracuse lead in assists and was second in points. The Belle River, Ontario native posted seven multi-point games and had a pair of assists against Princeton and RIT. She earned the CHA Rookie of the Week Award three times in her freshman campaign.

A native of Etobicoke, Ontario, Primeau secured a place on the CHA All-Rookie Team for her 12-point season. Her 10 goals tied for second on the Syracuse team and her .34 goals per game ranked ninth in the CHA. She scored a career-best two goals against Lindenwood. Primeau was named CHA Rookie of the Week two times in 2021-22.

Women’s hockey goes into postseason on a high note