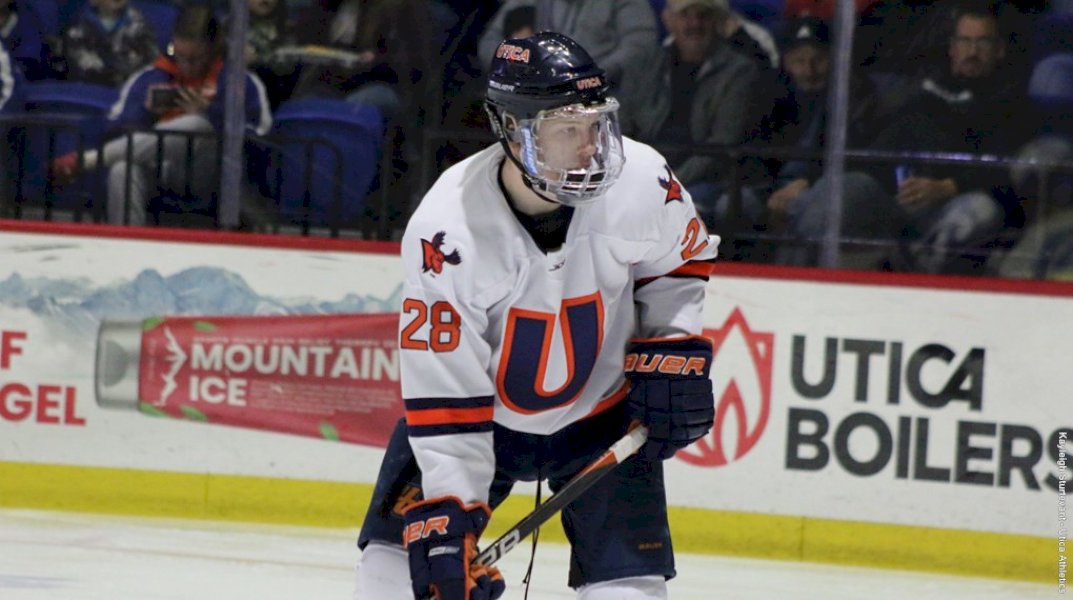 UTICA, NY – The Utica University men’s ice hockey team won a fourth straight game, and notched a second straight weekend sweep in the process on Sunday. The Pioneers busted open a 2-2 score at the end of the first period with four straight goals in the second en route to a 6-3 win over visiting Chatham at the Adirondack Bank Center at the Utica Memorial Auditorium.

The Pioneers had a season-high 50 shots on goal compared to Chatham’s 29. Utica saw improvement on the power play at 2-for-4, while Chatham was 3-of-7 with 16 of their shots coming on the power play.

Andrew Warhoftig, Caden Smith, and Carson Grainer scored for the Cougars, who cap off a lengthy road trip to start the year.

In goal, Bryan Landsberger (Montreal, Quebec/Nepean Raiders (CCHL)) had 26 saves to earn the win, while Ricardo Gonzalez and Nick Bernstein combined for 44 saves in defeat.

As with Saturday’s game, the Pioneers opened with a sizzling start to build an early 2-0 lead. With Chatham’s Chris Dusek boxed for tripping, the Pioneers produced a beautiful goal to get the lead, and generate some momentum for their power play unit. With the clock approaching 3:47 of the first, Buster Larsson (Malmo, Sweden/Utica Jr. Comets (NCDC)) made a sharp play under pressure and spun the puck down to Kimball Johnson (Coppell, TX/University of St. Thomas (NCAA DI)) on the left wing. Johnson sent it to the corner to Dante Zapata (Huntington Beach, CA/Austin Bruins (NAHL)), who made the one touch pass to Jakob Breault (Acton Vale, QC/Alaska-Fairbanks (NCAA DI)) on the opposite circle. Breault fluidly wristed the puck to the back of the net for a 1-0 lead.

The 1-0 lead became 2-0 at 5:30 of the first period as Brandon Osmundson (Virginia Beach, VA/Hampton Roads Whalers (USPHL)) shot the puck from just inside the blue line, and it ramped off the stick of Zapata for the deflection goal. Brian Scoville (Agawam, MA/Alabama-Huntsville (NCAA DI)) picked up the second assist on the play. It was Osmundson’s 99th career point, and the third goal of the season for Zapata.

The Pioneers had a comfortable early lead, but a five minute major gave the visitors life and provided an unexpected plot twist. With Blake Holmes (Apple Valley, MN/Minnesota Wilderness (NAHL)) done for the night on the penalty, the Cougars capitalized on a pair of goals from the left circle to tie the game. Andrew Warhoftig scored just moments into the advantage at 7:10, and Carson Grainer netted his second goal of the season at 7:40 for a 2-2 score that held until the buzzer. Utica outshot Chatham 17-11 in an eventful first period.

The second period took the action of the first, and ramped up the intensity as the Pioneers rattled off four straight goals to compound their lead.

Utica’s second period blitz began with Cameron Patton’s (Truro, Nova Scotia/Yarmouth Mariners (MJAHL)) second goal of the weekend at 3:32, as he lit the lamp on a power play marker. Josh Kagan (Winnipeg, Manitoba/Powell River Kings (BCHL)) joined the fun as he capitalized on a 3-on-2 rush to score his first of the season at 7:05. Patton canned his second of the afternoon at 7:32, with assists from Zapata and Dobay for a 5-2 lead. Five goals became six at 9:38 as Shane Murphy (Oriskany, NY/Danbury Hat Tricks (NAHL)) potted his first career intercollegiate goal.

Chatham offered up a response late in the second period on Caden Smith’s second goal of the weekend, and Chatham’s third man advantage goal of the game. The Cougars trailed 6-3 after two periods.

Utica outshot the Cougars 12-8 in the third, but neither team scored again en route to a 6-3 final score.

The Pioneers will host Wilkes University on Friday at 7 p.m.