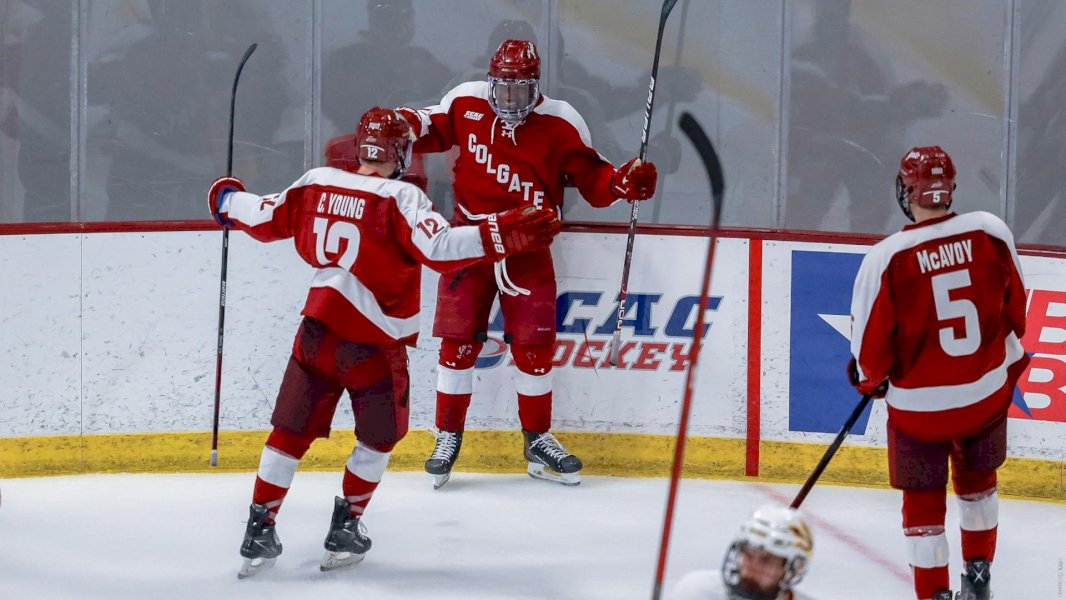 HAMILTON— The Colgate men’s hockey team scored its most goals in a game since the 2012-13 season, netting eight on Friday evening against Arizona State.

A six-goal second period helped the Raiders to achieve this as four different Colgate skaters found the back of the net during the period.

Just under four minutes into the game with the Raiders down a man, Ryan McGuire found Colton Young who would finish it off on a breakaway.

The Sun Devils would answer back with two straight goals as they took a 2-1 lead into the first intermission.

Alex DiPaolo put one in to tie the game up at 2-2 just over two minutes into the second. Quick back-to-back goals by Ross Mitton double Colgate’s lead.

Colton Young then put another one in before Brandon Pierson would finish up the scoring outburst with a goal of his own.

In the third Pierson would pick up where he left off, notching his second of the game.

The Sun Devils then pulled one back on a power play with 8:20 remaining to make it 7-3.

Colton Young would finish off the scoring and his impressive day with a third goal for a hat trick. The junior also had an assist making it a four-point game.

Carter Gylander helped prevent the Sun Devils from having their own scoring storm as he made 35 saves in net.

“I say it a lot that hockey is a game of momentum. I thought it swung our way in the second period with the score tied 2-2. Carter made two huge leg saves to keep it tied, and a few minutes later we score on a delayed penalty and then score on the ensuing power play. It’s a funny game that way. That said, we had some great individual efforts tonight as well from guys like Colton Young, Ross Mitton, and Pierson Brandon. It was also nice to see Alex DiPaolo, another first-year, score.

I have a lot of respect for what Greg Powers and his staff have done at ASU in a relatively short period of time. They are a good team with a very dangerous power play. I know they will be ready to play tomorrow and we will need to be at our best.”

The Raiders conclude their weekend series with ASU at 7 p.m. on Saturday.