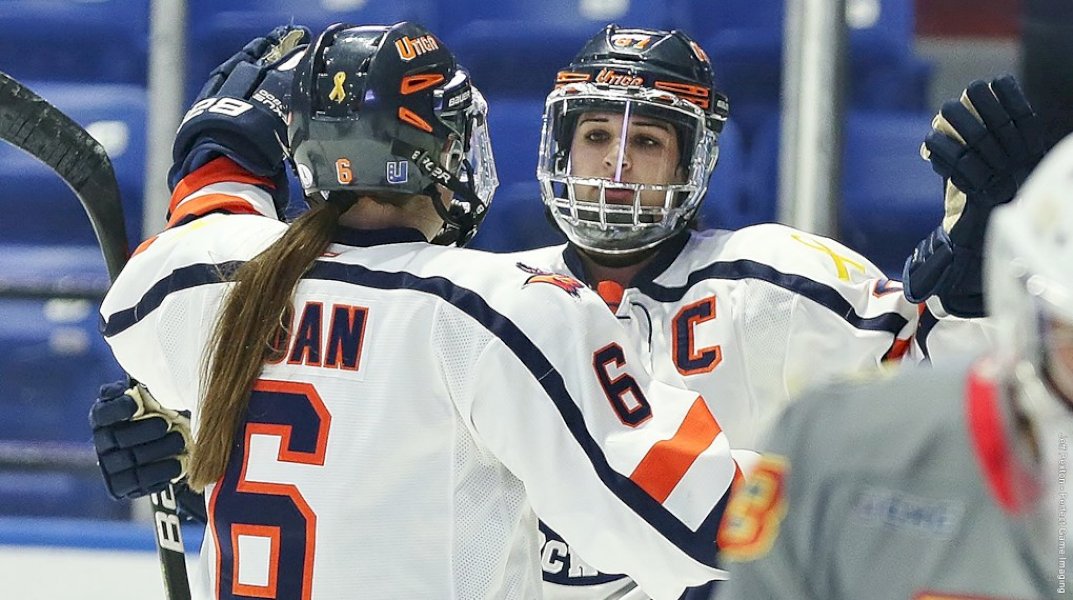 UTICA, NY- The Utica College women’s hockey team cruised to a lopsided victory over visiting Kings College 13-0 in United Collegiate hockey Conference action Friday afternoon at the Adirondack Bank Center.  Eleven different players found the back on the net in the win for Utica.

UC controlled play from the drop of the puck and wasted little time getting on the board.  Nicole Flak (Middleton, MA/Boston Shamrocks) opened the scoring at 2:29 as her wrist shot from the point made its way through traffic and in for her first of the year.  Hailey Modlin (Phoenix, AZ/Boston Shamrocks) and Rebecca Brown (Steamboat Springs, CO/Norwich University) picked up assists on the eventual game-winner.

Utica peppered Kings goalie Syd Dahl, firing 19 shots on goal in the first period.  Dahl was able to keep it a one-goal for the majority of the first period, but the barrage of shots by Utica finally cracked the kings defense at 17:03 as senior Georgiana Santullo (Woburn, MA/Boston Shamrocks/Woburn High School) put in her first of the day.  Utica struck against just 2:33 later as Cortney Staniszewski (Buffalo, NY/Niagara Jr. Purple Eagles) put in her first of the season.

The flood gates opened as the Pioneers netted seven goals in the second period to take a commanding 10-0 lead after 40 minutes. UC tacked on three more scores in the third period to cap off the victory.

Santullo lit the lamp two more times to pick up her third straight hat trick.  She becomes the first player in program history to record a hat trick in three consecutive games.  The forward also added two assists in the win.

The teams wrap up the season series Saturday at 2 p.m.

Late Push Not Enough as Mustangs Fall to Roos 4-2